Communist Party of Turkey (TKP) made a statement regarding the coup of imperialist forces in Bolivia, noting that the communists of Turkey are in solidarity with the working people of Bolivia to invalidate this imperialist-backed coup 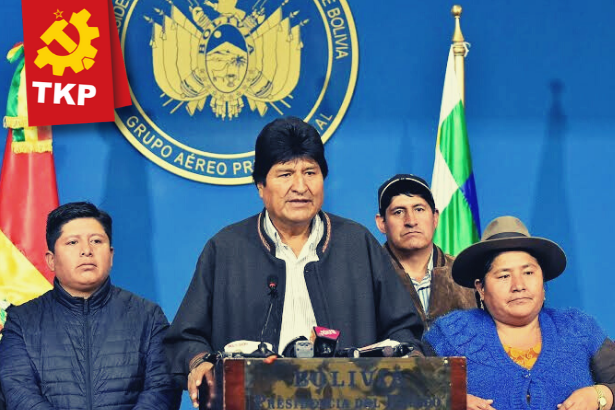 Communist Party of Turkey (TKP), in a statement, declares its solidarity with the working people of Bolivia, where an imperialist-backed opposition brought the country to the brink of a civil war.

Morales and his movement, which has been in power for 14 years, has achieved increased independence and growth of Bolivian economy during this period, has provided humanely living conditions for the indigenous peoples of Bolivia and millions of poor. Last week’s electoral victory, turned out as a success that the imperialists could not stand. The attacks against Morales are based on allegations of corruption in the elections. However, the source of the claims is OAS (Organization of American States), an institution that in essence functions in compliance with US foreign policy; and under these circumstances, OAS’s election monitoring does raise question marks and cannot be fully trusted.

Following the allegations, within a week, the right-wing opposition brought the country to the brink of a civil war and Morales announced his resignation, in order to prevent further violence and attacks against the citizens.

What has happened in Bolivia is a coup, it is realized with the support of imperialism and it is illegitimate. Imperialism is resorting to the methods it had employed in the previous century again, and once again trying to suffocate the peoples of Latin America with a coup. The content expressed by the US puppet right-wing governments in Latin America after the resignation of Morales, and the attacks against the Bolivia embassies of Latin America’s progressive popular governments which are targeted by the US, prove this. What will follow this coup is obvious: The withdrawal of nationalizations, the seizure of the people’s properties, plunder, impoverishment ...

Who portrays Morales government as a tyranny, is an enemy of the Bolivian people. The right-wing opposition, benefitting from the coup, has already intensified its racist attacks. They will be responsible for the slightest harm done against Morales and the militants of the MAS movement.

Communist Party of Turkey declares its solidarity with the working people of Bolivia to invalidate this imperialist-backed coup.