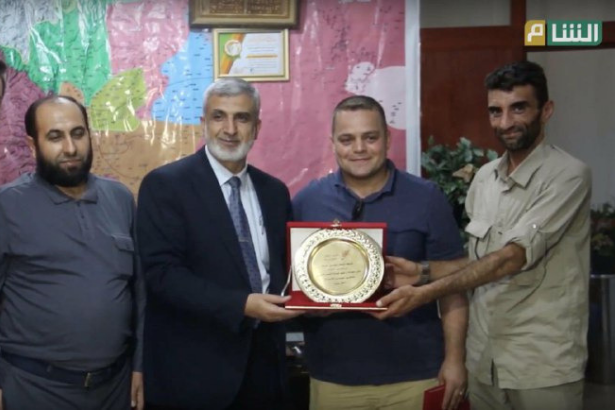 Syria's northwest city of İdlib's HTS-led "Salvation Government" awarded some media outlets in Turkey, including the state-run TRT for their "service to revolution".

At the award ceremony issued by the shamuna news agency on July 2, officials of the Salvation Government met with the representatives of local and international media organizations who "serve the Revolution and cover the tragedy in Idlib”.

At the ceremony, Prime Minister of the Salvation Government presented the award to Ubeyde Hitto, TRT's correspondent for the controversial news in Syria.

TRT's Syrian correspondent, Hitto, is a name close to al-Qaeda affiliated groups in Syria. Hitto had previously been heard with the news when he passed through the village of Hassaniye, controlled by HTS that is Al Qaeda's extension in this country and the delegation behind the Salvation Government.

The village of Hassaniye, which was home to the Christian population prior to the war, was subjected to attacks by jihadist groups and its inhabitants fled to Latakia by early 2013. The village was known because of a video shared where the priest Francis Murad was beheaded by jihadists.

Hitto, on the other hand, did not tell these facts in the news and said that the airstrikes against the jihadist forces that held the village under occupation were the proofs that the regime attacked not only Muslims but also Christians. Syrians who previously lived in the village reacted to the news on social media.

In May 2015, the al-Nusra Front the predecessor of HTS, and its allies captured Idlib. In November 2017, the Al Qaeda affiliated group formed the Salvation Government to rule the region.

The Salvation Government rules Idlib with strict Sharia rules in line with Al Qaeda's principles. While the punishment of not praying in Idlib, where women are forbidden to walk without veils, is being whipped, women and homosexuals allegedly “engaging in prostitution" are slaughtered in accordance with the Sharia courts' decision.

Although Turkey declared the al-Nusra Front as a terrorist organization, the Turkish government established trade and diplomatic relationships with the Salvation Government.