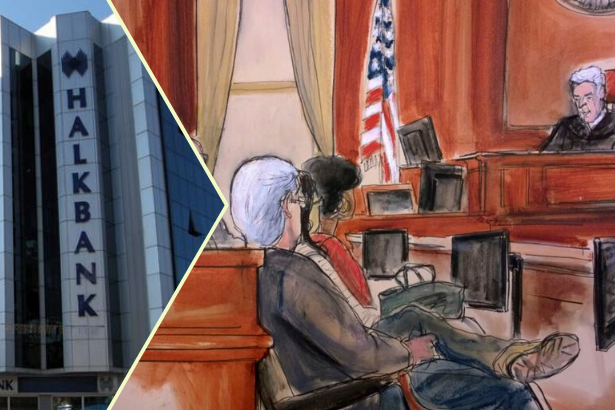 Halkbank is still being judged in the case which started on the 22nd of October in New York, being charged with working around the US sanctions against Iran.

In the 45-pages-long indictment prepared by the Southern NY DA, Halkbank has been accused of 6 different crimes including fraud and money laundering.

Being charged with illegally transferring 20 billion USD to Iran, Halkbank renounced the claims. The DA stated that they served Halkbank the court order via the cargo company FedEx, yet the company refused to receive it. Thus the DA claimed that Halkbank is aware of the allegations and is trying to fudge the case as it renounces the receipt of the document.

The Halkbank case is being examined by the same Judge Richard Berman who also ruled the case where Mehmet Hakan Atilla, former Vice General Manager of Halkbank was sentenced. As he returned back to Turkey, Hakan Atilla whose appeal is currently being examined in cassation was greeted by Berat Albayrak, Minister of Treasury and Exchequer, and was promoted to Manager General of Borsa İstanbul (Istanbul Stock Market).

REQUEST FOR RECUSATION OF THE JUDGE

Amerika'nın Sesi reports that assistant DAs affiliated to Southern NY DA’s Office and four attorneys from the King & Spalding Law Firm which also counseled Halkbank during the investigation and conducted its legal representation in the US joined the case.

Andrew Huska, the attorney of Halkbank stated that the US does not have the jurisdiction on Halkbank and intended to join the hearing in order to present the motion for recusation.

Michael Lockhard, the DA’s assistant objected to this kind of attendance and mentioned that it is not legally possible.

Judge Berman, demanded a new detailed petition from the law firm for Halkbank’s request regarding the attendance on a limited and specified extent. For submission of their arguments, the attorneys were granted a term until the 19th of November.

Berman also gave the DA a delay in responding to the claims of the attorneys until the 26th of November. He also requested the King & Spalding law firm to respond to the petition of the DA until the 2nd of December.

Hruska, Halkbank’s attorney, has brought forward as the reasoning of his request for recusation that Judge Berman has examined the cases where Rıza Sarraf and Mehmet Hakan Atilla were judged and that he has made “statements criticizing Turkish government” in a symposium in Istanbul.

The reasoning that “the US has no jurisdiction on Halkbank” is based on the fact that the Bank does not have any assets or activities in the US.

"HALKBANK IS FUDGING THE CASE"

Adam Klasfeld, one of the reporters who followed the case shared a new document submitted before the court by the DA before the hearing yesterday. In the document, the DA claimed that they have served the court order through FedEx, yet Halkbank refrained from receiving the document promptly.

The DA has also shared the hand-written note upon the rejection of receipt of the document which was delivered to Halkbank on 25th of October:

“Since the documents sent via FedEx are conveyed in non-compliance with the legal serving provisions in the conventions between the US and the Turkish Republic, they were returned without being received by our Bank.”

Though there is someone’s signature on the document, the name is not present except for the inscription Halk Bankası Legal Affairs Management Office.

Thus the DA claims that Halkbank is aware of the accusations towards itself and is trying to refrain from the case not accepting the receipt of the document.

Bluebay Investment Counseling Analyst Tim Ash, expressing his views regarding the matter to BBC Turkish stated that this is “an extraordinary situation”. Mentioning that “If it was a European Bank it already would have taken responsibility, paid the penalty and gone with its business.” Ash claimed that President Recep Tayyip Erdoğan is using Turkey’s geopolitical importance against the US but it is not clear what good is in strategic relations with Turkey for the US. Tim ash also added that the markets are currently pricing a possibility for sanction.

It was reported that no representatives attended from the bank to the Halkbank case regarding the violation plans of the US sanctions on Iran in the federal court in Manhattan on the 22nd of October.

Michael Lockhard, the DA assistant who underlined that the DA’s office has served the court order to the attorneys of Halkbank in the US, stated that the bank is fudging the charges by not attending the hearing and show disobedience before the court.

Judge Richard Bergman examining the case commented on Mehmet Hakan Atilla’s assignation as Manager General of Borsa İstanbul when he returned to Turkey after his imprisonment in the US for more than 2 years as “I suppose this is a way to integrate a person who has committed financial crimes”.

Mevlüt Çavuşoğlu, Minister of Foreign Affairs evaluated the case as “If the US laws are duly applied and political motives are put aside, Halkbank will be freed of many claims they are charged with”.

Also, the Bank made comments on Public Information Platform stating “Our Bank being never have violated secondary sanctions of the US in any way, since it does not have any branches or employees operating in the US, the US Ministry of Justice has no jurisdiction on the secondary sanction decrees. Issuance of an indictment despite this fact is an unprecedented excess of legal power.”