Greece’s All-Workers Militant Front (PAME) has released a message of solidarity with the mine workers in Turkey’s Soma and Ermenek as the workers are struggling for their rights and marching to Ankara despite the police attacks and attempts to prevent their struggle. 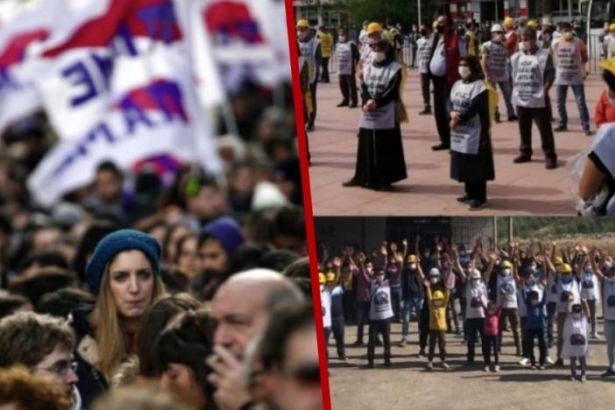 PAME, one of the largest workers’ unions in Greece and a member of the World Federation of Trade Unions, has conveyed a message of solidarity with the resisting miners in Turkey.

Mine workers in Turkey’s western district of Soma/Manisa and central district of Ermenek/Karaman have decided to march to Ankara for their rights to compensation since the mining companies did not pay their compensation for years.

“We denounce the violence and repression of the Turkish government,” PAME has said, expressing its solidarity with the miners from Soma and Ermenek.

The full statement of the neighbouring workers’ union PAME is as follows:

Solidarity with the miners of SOMA and ERMENEK in Turkey

PAME, a member of WFTU, expresses its solidarity with the hundreds of miners of the company UYAR who have been fighting for their compensation for years.

A few years ago in the black mines of the city of Soma, in 2013 301 miners were killed. While in the city of Ermenek, there was also a fatal accident at work in 2014 with 18 dead. Hundreds of miners in the two cities, who survived the death mines, are now facing starvation and misery after the company did not pay them compensation.

At the initiative of the Bagimsiz Maden Trade Union, a member of the WFTU in Turkey, the workers march to Ankara to claim their compensation. The protest of miners, who are on the street with their families, women and small children, was violently attacked by the police yesterday, October 12.

PAME expresses its solidarity with the just struggle of the Soma and Ermenek miners and we denounce the violence and repression of the Turkish government. Colleagues on your long journey to Ankara, we will walk by your side!