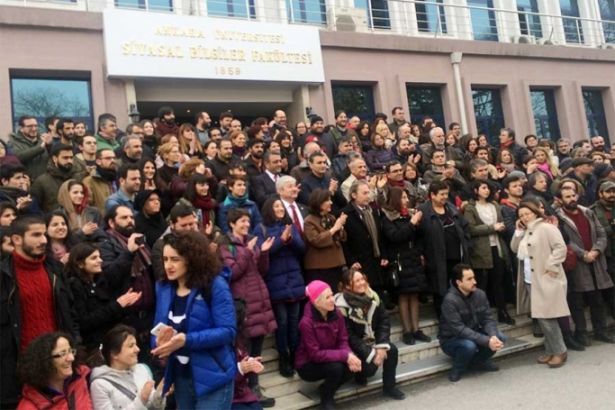 A total of 330 academics were expelled with a new state of emergency decree published in the Official Gazette late on February 7, drawing criticism from the opposition and the scholars themselves about the effect the moves will have on education.

The executive decree approved and published by the Justice and Development Party (AKP) government on Tuesday dismissed thousands of people from civil service. Executive decrees put in action after failed coup attempt on July 15 were legitimised within the pretext of "struggle against a terrorist organisation of U.S.-based Islamic preacher Gulen sect.". However, the executive decrees target left-wing civil servants, including teachers and academicians.

Academicians and students of Ankara University came together in the Faculty of Political Sciences to protest the dismissal of 70 academicians from the University, with the participation of some MPs from opposition party.

Police forces tried to prevent the participation of students. The protestors demanded the resignation of the rector.

Prof. Ahmet Haşim Köse, dismissed from the Faculty of Political Sciences of Ankara University, indicated that the AKP government attacks everything to destroy the university. He indicated that the price of these attacks will be paid not only by the dismissed academicians but by the whole society. Köse underlined the Faculty of Political Sciences of the Ankara University is a faculty which trains the bureaucratic cadres and intellectuals of the society and that AKP government attacks to this tradition as a part of its attack to the state tradition of the Republic of Turkey.

Köse also mentioned that dismissed academicians will continue their intellectuals efforts and struggle outside the university.

Assoc. Prof. Nilgün Erdem from the same university mentioned that the executive decrees are not legal and pro-democracy-minded people are suppressed. Erdem added that the universities in Turkey were always targets of governments; however the attacks by AKP surpassed the past experiences in size.

CHP, parliament's main opposition party, also lashed out the executive decree. Selin Sayek Böke, spokeswoman of CHP said that universities in Turkey were targeted by each repressive governments and governments of coup d'états, along the history. She also mentioned that rectors of the universities, who did not protect their academicians from this repressive government will be punished by the history. Böke declared the solidarity of CHP with the dismissed academicians.

DEPARTMENT OF THEATRE LOST MOST OF ITS ACADEMIC STAFF

With the latest executive decree, the question emerged that how education will be continued in some departments of Ankara University. Only 4 academic staffs are left in the Department of Theatre of this faculty. The department is face-to-face with the danger of being closed.

The platform of Kadıköy Theatres made a press statement about this subject and mentioned that Department of Theatre in Ankara University is a pioneer in the education of theatre in Turkey. Platform underlined that academic staff of this department are dismissed because they declared their wish for peace and used their freedom of expression.