Governorate of Turkey’s Dersim banned an event of the Communist Party of Turkey (TKP) on the developments in Syria, which was planned to take place in TKP Dersim building 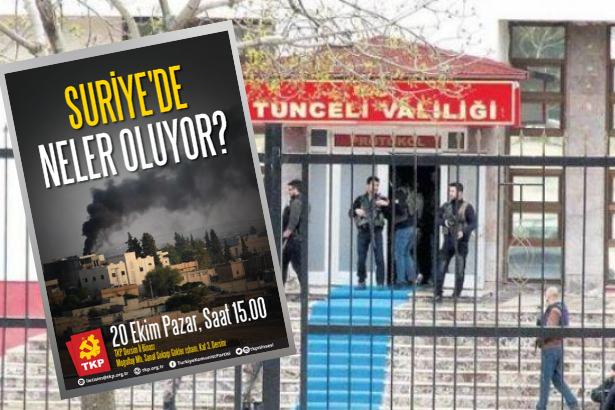 The Governorate of Turkey’s southeast Tunceli (Dersim) city, where the Communist Party of Turkey (TKP) had won the local elections and has been in power in the municipality, banned an event titled “What is happening in Syria?” which had been planned to take place the provincial building of the TKP.

While the ban did not involve any justification, it stated that “any events including all sorts of meetings and demonstrations, press releases, any protests through indoor or outdoor meetings, any rallies, tenting, sit-in acts, opening booths, hunger strikes, commemorative ceremonies, hanging banners, bills, or posters, handing out leaflets or notices, setting up petition desks, lighting or carrying torches, holding conferences, etc. are prohibited for 30 days from October 18, 00:01 hours until November 19, 23:59 hours.”

The provincial organization of the TKP in Dersim argues that the war policies of Turkey’s ruling AKP attract reactions in Dersim and other eastern cities and while these reactions are suppressed by the open terror of the state, the governorate in Dersim attempts to prevent reactions through banning.

TKP Dersim’s provincial administration also states that the ban is completely unlawful, that the right to conduct politics, which is protected by the Constitution and the Political Parties Act, is being overridden, and that the increased interest and sympathy for socialism disquiet reactionary circles.