Eren Erdem, a former lawmaker from Turkey’s parliamentary main opposition Republican People’s Party (CHP), has decided to go on a hunger strike to protest his detention for alleged links to Gülenist network 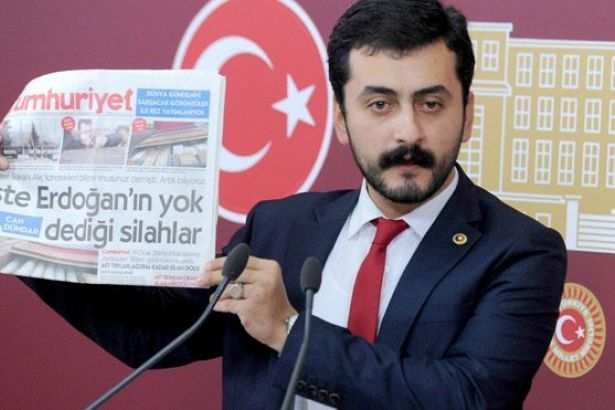 Former opposition lawmaker, CHP MP Eren Erdem was arrested in June 2018 for aiding Fethullah Gülen’s terror organization (FETÖ), one of the masterminds of the 2016 failed coup attempt against President Recep Tayyip Erdoğan’s government. He began a hunger strike on January 28, protesting his arrest on January 7 after a verdict of release on the same day.

Being on hunger strike for four days, Erdem is accused of publishing illegal wiretappings when he had been the editor-in-chief of Karşı newspaper as a series of audio recordings had been leaked to the media by the US-based Islamic preacher Gülen’s network, Erdoğan’s former ally, during a corruption scandal in 2013, involving key government members and Erdoğan’s inner circle.

Visiting Erdem in prison, CHP MP Sezgin Tanrıkulu has told reporters that the medical state of jailed Erdem is good for the moment, yet he is remaining under very severe conditions. “His conditions are against justice and legal rules. He has said he took this decision to protest this situation,” Tanrıkulu has noted.

ARRESTED AGAIN DESPITE A VERDICT OF RELEASE

Having been jailed since June 29, 2018, a few days after he had lost his seat in parliament following the June 24 elections, Erdem was to be released by a heavy penal court’s verdict on January 7, 2019; however, a higher court in İstanbul issued an arrest warrant for Erdem upon the objection of the İstanbul chief public prosecutor’s office, leading to the continuation of his arrest. Erdem faces up to 19 years in prison for several accusations.

Former journalist and lawmaker, Eren Erdem had been the editor-in-chief of Karşı daily in December 2013 when a huge corruption scandal had hit Turkey. Then-Prime Minister Erdoğan’s inner circle and some cabinet ministers had been accused of bribery, corruption, fraud, money laundering and gold smuggling. Erdoğan has repeatedly described the corruption investigation as an international conspiracy and a judicial coup orchestrated by his former ally Gülen’s organization.