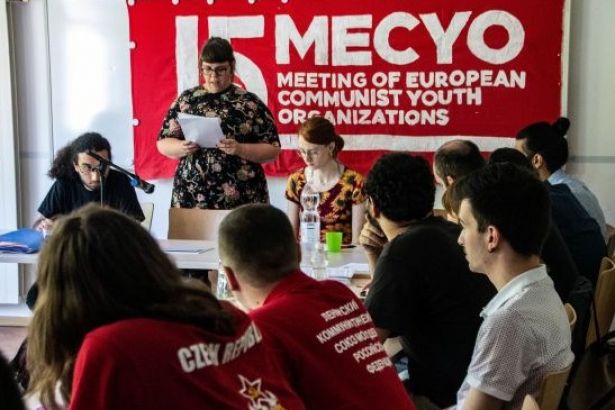 In the seminar held on the 29th of June, the experience and outcomes obtained from the struggle of youth organizations for modern needs of studying and working youth were debated upon.

The seminar commenced with the greeting speeches of Party of Labor of Austria (PdA) and Communist Youth of Austria. Following the quotation of messages sent by the communist youth organizations that could not attend the meeting, unique presentations were made regarding the arising youth struggle all over Europe.

In the presentation made by TKG, it was emphasized that the universities and high schools had been struggling against anti-imperialism and socialism since ’68 and that the systematical reactionary policies of the AKP government sustained on behalf of the capital in Turkey had been renounced by the youth. As examples of TKG’s contribution to the youth struggle in Turkey were shared, it was underlined that the struggle against reactionism, imperialism, and the dictatorship of capital would be in vain unless it has a strategy ornamented with socialist revolution.

Mutual Struggle against the Provocation of the Capital in the Mediterranean

In the end of the presentation, touching upon the insistent provocations of the capitalist class in Mediterranean in order to set the working classes of Turkey and Greece against one another, the delegacy of Communist Youth of Greece mentioned that TKG and KNE uniformly struggled against it, and stated that this internationalist struggle placed TKG to a very unique position in Turkey. The delegacy of TKG mentioned that the system’s politics had fallen into the nationalist reactionary discourse originating from AKP and that the bourgeois opposition was trying to corner TKP pursuant to it.

The Nazi Occupation and Linz

Following the meeting, the program continued with a conversation forum upon the destruction left behind by the fascist Nazi occupation in Austria in the town of Linz where the meeting was held. As a tour was arranged to the memory sites of the anti-fascist struggle of communists in the town, it was said that the current Austrian government had been acting by means of references in the Nazi era, yet the working classes would not let another imperialist division war.

The Class Struggle in Europe continues

In the mutual statement resolution submitted for the attendant organizations’ signature in the meeting, it was underlined that the communist youth organizations spearhead the struggle against the capital.

It was stated that after a hundred years over the murdering of Rosa Luxemburg and Karl Liebknecht, the dictatorship of capital and monopolies still ruled on. Affirming that notwithstanding, the class struggle had not come to an end in Europe, the mutual resolution remarked via few incidents that the intervention of communist youth organizations in labor and student movement exponentially grew.

It is declared, "We, the CYOs, continue to fight for a radical line of recovery and reinforcement of the communist and workers’ movement all over Europe, away from the deadly embrace of social-democracy, the beautification of the EU or the illusion of fixing it for the benefit of the popular interests, while they are implementing together with the right-wing and the neoliberal the reactionary and anti-people measures." The declaration ends with a quote from Rosa Luxemburg: “You foolish lackeys! Your “order” is built on sand. Tomorrow the revolution will “rise up again, clashing its weapons,” and to your horror, it will proclaim with trumpets blazing: I was, I am, I shall be!”

More information can be found at the International Communist Press (ICP): http://icp.sol.org.tr/europe/15th-mecyo-took-place-linz