Erdoğan’s whim for Idlib: Who is planning what?

Journalist and Middle East expert, Ali Örnek, interprets for soL news the recent developments regarding the Syrian winter offensive in Idlib with the aspect of Turkish involvement in the region. 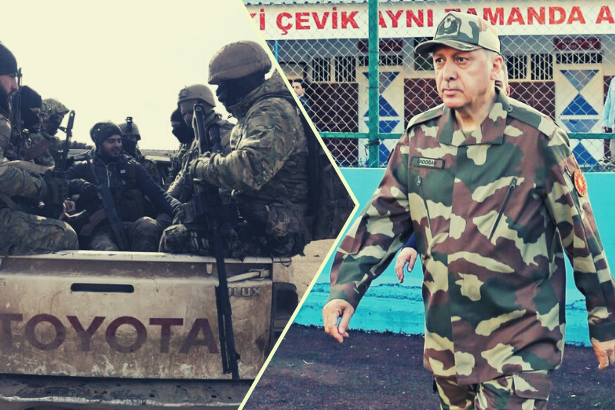 The Idlib operation conducted by the Syrian government as of January was, in fact, long-awaited. Yet, it was halted twice by Russia so that Turkey does not get pushed towards US camp. First, a road map was determined in Astana for the political course among Turkey, Iran and Russia and then Sochi Agreement emerged in September 2018 through the negotiations between President Erdoğan and Russian leader Putin.

By this agreement, Idlib was declared a non-conflict zone as Turkey committed to three agendas: First, Turkey was to open the M5 highway linking Damascus to Aleppo and the M4 highway linking Aleppo to Latakia to safe travel. Secondly, Turkey was to separate Al Qaeda-linked HTS from other armed groups under its support. Thirdly, Turkey was to prevent attacks towards Syrian-controlled regions from its side. Through the 2-year process thus far, no steps were taken in this respect.

Contrarily, Al Qaeda-linked HTS, which was requested to be separated from FSA by Turkey as it was left out of the scope of the agreement, purged rival groups from Idlib and even further strengthened its control over the city after it was announced non-conflict zone. So much so that, the report submitted to UNSC in January stated that Idlib was mainly under control of HTS and Hurasaddin, which is another Al Qaeda offshoot.

THE MOMENTUM OF OPERATION PEACE SPRING

Although Russian officials occasionally implied the non-implementation of Sochi agreement by Turkey, neither in the field nor in diplomacy Turkey was pressed for it. But things started to change severely after the Peace Spring operation beginning in October 2019. While Putin and Erdoğan negotiated the depth of the buffer zone in eastern part of Syria, Russian press wrote Moscow also had plans for Idlib. The news claimed that Moscow would push Turkey through the north of M4 and east of M5. In the same period, Syrian President Assad was seen on Idlib front. Then, the agenda of Putin’s visit to Damascus was the military operation in Idlib. Finally, on the 9th of January, the Syrian Army kicked off the Idlib offensive to open M5 and M4 roads and to ride Al Qaeda-linked groups to the mountainous region on the Turkish border.

While referring to the developments in Idlib due to the changes in the field, we need to take into consideration as well the green light given by the US to Peace Spring offensive at the expense of leaving US proxy force YPG alone in the face of Turkey. After Peace Spring, I have written that on the eve of the direct hostility of the US against Iran, the US needed Turkey and jihadist groups it is supporting again and that the crisis emerging from the support to YPG was tried to be overcome by Peace Spring operation.

To sum up, the US struggling against IS in Syria by the aid of its proxy YPG in 2014 was, in fact, aiming to drag Syria to a permanent economic and political instability. But as of 2018, this plan started not to work. What was even worse for Washington was that due to the support to YPG, Turkey provided further space in the meaning of diplomacy and the field to Russia and Iran. The turning point of this plan was the Peace Spring. The US, furthermore, withdrew from the scene and managed to leave the YPG presence in northern Syria over the shoulders of Russia opening a large maneuvering space for itself.

Right before and after the Peace Spring, the similarity between Turkish and the US discourse was remarkable. For example, the words of Minister of Foreign Affairs, Cavusoglu, on the identification of Turkish observation points established in Idlib to supervise the ceasefire in the Sochi Agreement were bold. Saying that “Turkish military will withdraw when Syria reaches a political resolution,” Cavusoglu declared that the Turkish military, which was once claimed to be present for “struggle against terrorism” or “supervising the ceasefire,” was in fact in Syria as a blackmailing item for a regime change. Right after that, Jeffrey, special Syrian envoy for Trump, the President of the US, said: “The Turks are in northwest Syria for their reasons, but that keeps the regime out.”

The first sign that Trump was going to follow a new Syrian policy was the assignment of Jeffrey. Jeffrey, known “Turk-friendly,” thought that Turkey also should be involved in the plan for keeping Syria in a permanent instability and economic devastation. Jeffrey thus reasoned that the Astana agreement in which the US was not involved could be toppled sabotaging this resolution process. Considering the relations with YPG as “tactical,” reminded the ties with Turkey were “strategic.” Jeffrey also observed that endeavor for regime change was in vain without passing to the western shore of Euphrates. This is precisely why Idlib was back into the agenda of the US. Because Idlib could sabotage Astana as it could put Turkey back on the US trail being a tool to be involved with the western side of Euphrates.

It is also essential that the tone of the Turkish threatening against Syria increased after each visit of Jeffrey. For example, Erdogan’s first speech implying TAF intervention against Syrian Army on 14th of December was only 5 days later than Jeffrey’s Ankara visit. During the telephone call in the airport on his return from that visit, he was seen on the TRT (Turkish state tv) camera saying that their condition got better with Turks in northern Syria as it got pretty worse with the Russian. The support coming from Washington caused Turkey to sharpen its discourse and increase its level of threats.

Lastly, as Erdogan threatened Damascus that if they do not withdraw back to the first OPs, then Turkey would start an operation, reciprocal attacks began to occur. Now Turkey is observed to coordinate jihadist groups and equip them with heavy arms, including armored vehicles. It is certain that the support happening in the region under control of Russia is not done without the approval of the US. We need to mainly evaluate the fact that Turkey is not even refraining from openly aiding the Al Qaeda-linked HTS.

As Erdogan defended in his speech on 29th of January that fighters in Idlib are not terrorists but the resisters defending their lands, just the next day, James Jeffrey defined HTS like “In terms of the HTS, the HTS has not – we have not seen them planning or carrying out international terrorism attacks.  We’ve seen them focusing on basically maintaining their position in Idlib”. It was once revealed in the press that Jeffrey was the one who prevented the condemnation by the US Department of State of killing of Kurdish politician Hevrin Halaf by FSA during Peace Spring operation. What was remarkable in that was the reasoning of Jeffrey that these groups may prove useful for the US in the future.

There is another remarkable point in this. Both Erdogan’s and Jeffrey’s words remind the interesting interview made by HTS Amir Joulani before the operation in Idlib. Refraining from sectarian and radical Islamist discourse in contrast with his former speeches, Joulani said they were fighting against Russian and Iranian invasion.

WHAT ABOUT THE PRICE?

Another detail hidden by the US-Turkey rapprochement is that relations with YPG are kept up. The US revived that they budgeted 200 million dollars for SDF, of which YPG is the backbone. Planning to compromise with Turkey in the western part of Euphrates and with YPG in the eastern part of it, Washington does not only see Idlib as a tool to sabotage Russo-Turkish relations. It also represents suitable conditions for restarting of YPG-Turkey negotiations, which the US wanted for a long time.

Even though the insults in the letter Trump sent to Erdogan veiled its content, it includes essential points involving the US perspective. The most remarkable one was that Trump told Erdogan that Mazlum Kobani, leader of YPG, is ready to negotiate. The US did not to anything meaning a retreat from this point. It should be noted in this point that YPG is silent about Idlib and allowed the political activity of Mesud Barzani-linked rival Kurdish parties, implying the restoration of the Turkish trail.

RUSSIA IS IN 'WAIT AND SEE' MOOD

It is beyond doubt that, for Russia, who directly involved in the Syrian field in 2015, Idlib is not an easy task. While trying to hold Turkey in Astana process, Moscow also presented a determined stance against the military operation implied by Erdogan at the same time. Russian jets continuously hit the groups intensely armed by Turkey as Idlib fly zone is off for Turkish planes. Via Dmitry Peskov, spokesperson for Kremlin, Moscow lately asked Turkey to halt attacks. Still, Russia has not made any decisive attempt.

The most important reason for it is that Moscow is pursuing some wait and see policy to determine the point where Turkish-US relations might reach. Undoubtedly, Russia will not waive from its acquisitions in the last five years, and it will try to blockade NATO to the western Euphrates, which is its controlled region by the aid of Turkey. Yet, it is still early to see its steps in the field.