SoL news interviewed Brian Becker, the member of the Central Committee of the Party for Socialism and Liberation (PSL), on the details of the oppression of the US government against Venezuela and the attitude of the western media 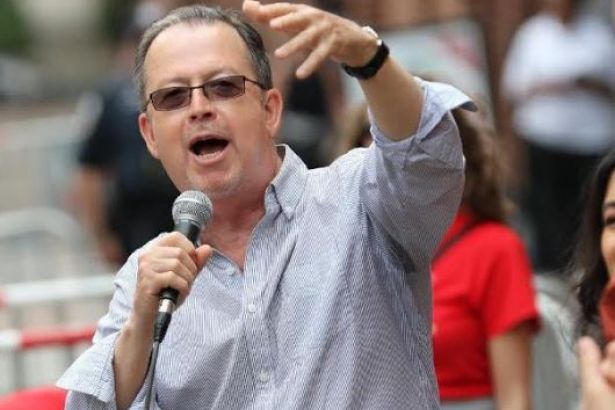 The solidarity of communist parties with the people of Venezuela against imperialism continues in various ways all over the world. It is an important task to inform the public correctly about what happened in Venezuela.

In this context, we addressed our questions as soL news to Brian Becker, the national director of the anti-war ANSWER coalition and member of the Central Committee of the Party for Socialism and Liberation (PSL) in the US.

Last Thursday, federal agents and Washington police officers suddenly entered the embassy and by force tried to remove the defenders. What were the legal grounds for the U.S. law enforcement to enter the building of the embassy and evict the defenders “to help” the staff of a leader whose appointment and its legitimacy should still be questioned?

There are no legal grounds for this arrest. They were not charged with trespassing or unlawful entry which speaks to the weakness of the criminal case. They were present at the embassy as the invited guests of the legal owner of the physical building and in the functionality of that building as the diplomatic embassy of the government of Venezuela. The U.S. government sidestepped this issue by arresting them on an obscure federal charge called “interfering with certain protective functions.” The arrests of these individuals constituted a “seizure” by the United States of a diplomatic embassy of a foreign government which is recognized at the United Nations as the sovereign power. This is a clear and brazen violation of Article 22 of the Vienna Convention. This is unprecedented in U.S. history. Even during the U.S.-sponsored Bay of Pigs invasion of Cuba in 1961 the United States did not seize the Cuban Embassy and hand it over to the opposition.

The Trump administration is systematically applying the core assets of U.S. power to topple the democratically elected government of Venezuela. This includes economic power through comprehensive sanctions that constitute a near economic blockade, military threats and war preparations, the seizure of tens of billions of dollars of Venezuelan assets and using these assets as a slush fund for the political opposition to the Maduro government, a diplomatic offensive whereby the U.S. has coerced or bribed more than 50 countries to recognize American puppet Juan Guaido as the president of Venezuela and covert operations like the targeting and sabotage of Venezuela's infrastructure including its national electrical grid.

Throughout the weeks the defenders were at the embassy, they faced harassment and violence from the right-wing supporters of Guaido as well as the local administration and law enforcement: How effective and responsible was the media in depicting those attacks and also in informing the public on what really went on?

The corporate owned media was virtually silent about this unusual drama playing out over more than five weeks in the heart of Washington DC. It was a particularly odd arrangement between the media and various police agencies. All corporate owned media stayed away with one or two exceptions as the State Department officers along with the police forces from the Secret Service, U.S. Marshals and Metropolitan Police Department created a cordon around the embassy and then protected thugs from Guaido's forces as they systematically carried out violent attacks against us and against the Embassy building. As we were finally ousted and the last people inside the embassy were arrested in a military-style operation the media started vilifying the protectors as people who violated the rights of Venezuelans to control their own embassy.

Can the unelected and the US-backed coup administration headed by Guaido achieve anything without the US intervention? How does he justify his position?

No. The coup failed on January 23 when Guaido announced he was the president. It failed again on February 23 when the issue of a “humanitarian delivery” was used as a pretext. It failed once again on April 30 when Guaido announced an armed uprising. Today, Carlos Vecchio, the fake ambassador of the fake president, is officially meeting with the head of Pentagon's Southcom to invite an invasion and other military actions against Venezuela.

What kind of responsibility falls to the fellow communist parties in the world to stand in solidarity with the people of Venezuela in defending their elected administration? What needs to be done? And what will be the agenda of ANSWER Coalition in the following days?

Can one be a genuine communist and fail to be an internationalist? The question answers itself. The targeting of the Venezuelan government is central to imperialism's plan to fully destroy any vestige of independence for the peoples of Latin America. Bolton revealed the actual plans of US imperialism with his “Troika of Tyranny” speech. The next targets are Nicaragua and Cuba. If Trump were to succeed in toppling the Cuban government, which has been the target of a 60-year long campaign of U.S. imperialism, he will win the praise of all sectors of the U.S. capitalist class. They will rejoice. Cubans and Latin Americans will suffer. The stakes couldn't be higher. If this counter-revolutionary thrust succeeds it will also be a blow of great consequences for the working class movement internationally. Communist parties everywhere should act now in opposition to this brazen counter-revolutionary offensive of imperialism.