Communist Youth of Turkey: refugee and native workers should unite to overthrow capitalism

The Communist Youth argues that native and refugee workers should unite to overthrow the capitalist order which, indeed, leads to wars and the refugee issue 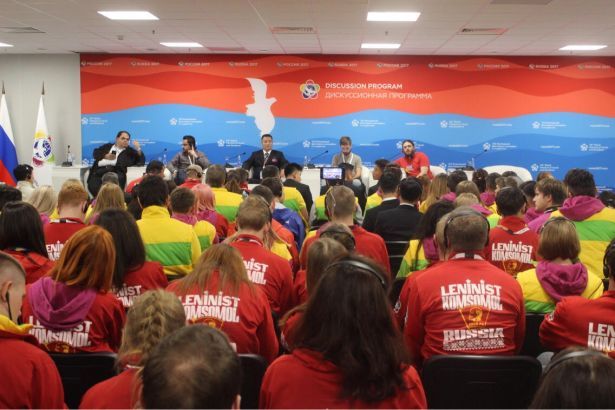 The Communist Youth of Turkey (TKG), the youth branch of the Communist Party of Turkey (TKP), prepared a presentation for a seminar on the refugee crisis during the ongoing XIX Festival of Youth and Students organized by the World Federation of Democratic Youth (WFDY) in Russia’s Sochi city.

Saluting all the youth struggling against imperialist and fascist forces all over the world, the Communist Youth of Turkey raises questions regarding the reasons compelling millions of people to leave their countries: "Is it a 'humanitarian crisis' came out of nowhere like CNN defines it, is it triggered by the touch of an evil force or is it the direct consequence of the crisis of capitalism and the sharpening inter-imperialist conflicts?"

Indicating to 1 million 321 thousand and 560 claims of asylum only in the year of 2015, the most massive migrant stream since World War II, the TKG points out underlying political reasons with examples from the dissolution of Yugoslavia with NATO bombs, the ethnic conflictions in Africa provoked by the imperialist centres, various military coups around the world and the imperialist operation against Syria.

"The refugee streams are not only the output of the capitalist system, but they also become the input of the same mechanism that works continuously for only one goal: to sustain the accumulation of capital. No UN conventions, no international declarations, and no so-called ‘humanitarian missions’... Nothing is more important than this goal in the eyes of the ruling class and its political representatives," the TKG statement follows.

The TKG also indicates to the position of over two million Syrian refugees in Turkey. "Some of them were inserted to the camps right next to the border in order to be utilized by the Turkish government demanding a buffer zone or a no-flight zone under the control of NATO in northern Syria. Many of them were used by the government as objects to blackmail the EU while they were only trying to reach the other side of the Aegean Sea and drowning because of fake lifejackets sold by the human traffickers working together with the state," the statement puts forth, with reference to the notorious role of Turkey’s Justice and Development Party government.

The TKG defines the refugees in Turkey as "slaves", noting that the refugee children are working for 12 hours a day without any social aids. The bourgeois government of Turkey considers millions of refugees a cheap labour force, while the locations of the newly built refugee camps are chosen to provoke certain ethnic and sectarian tensions around the county. The AKP government allows Islamist organizations to enter the camps while the opposition parties, researchers, journalists or academics are now allowed.

Against the xenophobic provocations of bourgeois politicians, the TKG says that the refugee and native workers must be united against the bourgeois system to overthrow the order.

"We must demand rights for the refugees. We must be in solidarity with the refugee people whose homes were bombed with the order of the governments which claim to represent us. We must do it for ourselves and for our goal of a new and better social order," the TKG concludes the statement.