The Communist Party of Turkey's (TKP) 12th Congress was held in İstanbul on May 27-28 with the slogan, 'to empower the socialist alternative'. The Congress unanimously approved six basic documents, and declared 2017 as 'the year of socialism'. The Congress has also announced that TKP will hold a 'festival of socialism' during the anniversary of the Great October Revolution 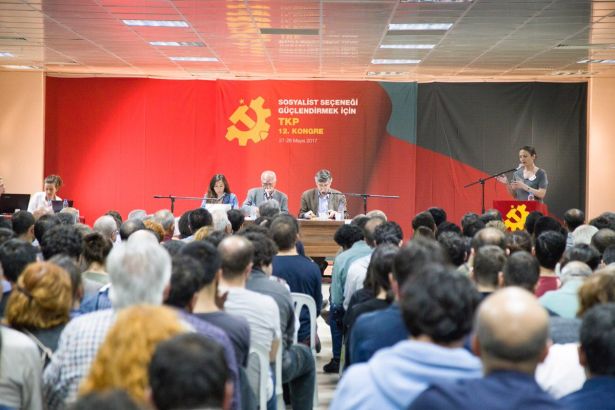 The Communist Party of Turkey’s (TKP) 12th Congress-Turkey Conference was held in İstanbul on May 27-28 under the slogan, “to empower the socialist alternative”.

Many important resolutions were taken during the conference sessions, in which 383 delegates from all party organisations participated, including 14 delegates from abroad.

The conference started with the opening speech of Kemal Okuyan, First Secretary of the Communist Party of Turkey.

Party member poet Nihat Behram’s salutation message was also read during the conference. Nihat Behram has donated the revenues of his book to TKP. Communist poet’s bookmarks the 50th year of his poetry.

‘THE YEAR OF SOCIALISM’

Many delegates took part in discussions and made contributions during the 2-day countrywide conference of TKP. The delegates unanimously approved such documents as “The Preface of the Party Programme”, “On the Party and Party life”, “Our Road is the Road of Revolution at the 100th Year of the Great October Socialist Revolution”, “Theses of 2017 on Imperialism Regarding Russia and China”, “Theses on the Party History”, “The Political and Organizational Goals, June 2017-June 2018”.

The Conference that was held with the slogan, “to empower the socialist alternative”, declared the existing working period as “the year of Socialism”, and decided to hold a grand “Festival of Socialism” during the anniversary of the October Revolution.

Apart from various documents and the report on the political and organisational goals, which were approved by the Congress delegation, some political resolutions were also put on the agenda.

The first resolution, “On the anniversary of the June Resistance”, echoes the fourth anniversary of Turkey’s mass anti-governmental protests and rallies in 2013, which attracted millions of people across the country, particularly in İstanbul’s iconic Taksim Square. 8 people were murdered by the police force of the Justice and Development Party (AKP) during the protests.

Indicating to the secularist position of the patriotic people in June 2013, TKP has declared that the people could not fit in the counterrevolution of AKP. TKP enthusiastically commemorates the fourth anniversary of the June Resistance in 2013, and bows respectfully before the memory of the people who lost their lives.

TKP’s 12th Congress has pointed out to the importance of the June Resistance and the role of the Party: “This mass movement, sustained by millions of compatriots for months, was a unique action in the history of our country. The Communist Party of Turkey took its part in the front lines of the resistance during the months of summer in 2013, made significant contributions in respect of militant struggles and also made critical interventions in the political character of the movement.”

TKP has also underlined the liberal and liquidationist attacks within the left: “The June Resistance could not gain continuity as a dynamic of the mass struggle because of insufficiencies in this very second aspect. It is not a coincidence that after 2013, a liberal political restoration and liquidation of the left was intended. The hegemonic powers tried to take revenge of the resistance by not only imposing nefarious policies of pressure but also intercepting the left.”

Following this political resolution, TKP has promised to bring the AKP power to account for all the crimes committed against Turkey’s people.

For the struggle against ‘the power of the rich’, TKP has declared: “12th Congress of the Communist Party of Turkey emphasises that this is a robbery that deprives our working people, who are getting poorer day by day, of all their rights. It represents the gravest attack against the dignity of our people. Our Congress declares that the working class will bring this humiliation to account.”

The third political resolution underlines the Party’s solidarity with the glass workers, whose strike was banned by the AKP government under the pretext of “a threat to national security”.

Announcing that the working class will not yield, this resolution has also described the recent situation of the working people in Turkey: “It has been a custom for the AKP government, which does not hesitate to attack the most fundamental rights of the working class, to ban strikes and to justify it with concerns of national security. Recently they also intended to ban the strike of the metal workers, which was frustrated with the actual struggle of workers. Now our sister and brother workers are defending their labour against the ban on strike declared in facilities of Şişecam [Turkey’s biggest glassware enterprise]. The unyielding glass workers are leading this resistance not only for their own rights but also on the name of our people as a whole.”

Upon the Congress resolution, TKP has declared that it will continue with all might its solidarity with the workers’ resistance and called all pro-labour forces to be part of the resistance.

‘ON THE POLICIES OF THE STATE OF EMERGENCY’

TKP’s 12th Congress has also pointed out to the unlawful implementations of the government that sacked tens of thousands of labourers during the existing long-termed state of emergency in Turkey. TKP, therefore, has declared that Nuriye Gülmen and Semih Özakça should be set free. The two educators in question were sacked by the government, started a hunger strike for over 2 months for their right to work, and finally were arrested by the government.

TKP has clearly pointed out: “Finally, the arrest of Nuriye Gülmen and Semih Özakça, the education workers who chose to resist with the hunger strike for their right to work, with fabricated reasons has blatantly shown the inhumane and labour-enemy character of the reactionary capitalist government. The Communist Party of Turkey categorically protests that and demands the liberation of Gülmen and Özakça and immediate restitution of their jobs.”

‘UNITED STRUGGLE OF THE PEOPLES OF THE REGION FOR SOCIALISM’

12th Congress of the Communist Party of Turkey has taken a fifth political resolution regarding the foreign affairs of Turkey’s ruling Justice and Development Party (AKP). TKP has particularly indicated to the notorious role of AKP in Syria, Cyprus and the Middle East:

“The foreign policy of AKP against the neighbouring countries as being totally irrelevant to the historical values of our people. AKP government is primarily liable of the current war and the bloodshed in Syria. AKP government initiates provocation against Greece and tries to antagonise our people, whenever it needs to manipulate the domestic or foreign political agenda. AKP government prefers to keep the Cyprus issue unsolved to be able to blackmail all the people of the Island. AKP government has been threatening the peoples of the regions and involving military activity implicitly and explicitly at times in the Middle East at others in the Black Sea. Those policies are amongst the primary reasons of the lost lives of thousands of immigrants, wars and bloodshed in our region.”

TKP has shown its fraternal solidarity with the neighbouring peoples in the region, emphasising that peace and justice could be achieved only with the struggle for socialism.

‘THE VENEZUELAN REVOLUTION WILL NOT SURRENDER’

The sixth political resolution of TKP’s 12th Congress has pointed out to the imperialist-led intervention in Venezuela: “Venezuela is being a scene of a nefarious scenario of counter-revolution by imperialism and its collaborators. The purpose of the provocation of the right-wing opposition, the smear campaigns waged by international bourgeois media, and the violent counter-revolutionary actions, which caused lives of tens of people, is to drag the Bolivarian government into chaos and pay the way for counter-revolution.”

The seventh political resolution of TKP’s 12th Congress has saluted Socialist Cuba, which has been targeted by imperialism, particularly the US imperialism, for long decades.

Declaring its solidarity with Cuba, TKP has underlined that the Cuban people have proved repeatedly that they would never retreat from the gains of socialism and the merits of patriotism.

In conclusion, TKP has shown solidarity with the Cuban people and their vanguard the Communist Party of Cuba, saluting Raul Castro as the comrade and leader of Cuban socialism.

Held with a slogan to empower the socialist alternative in Turkey and reinforced the decisive stance of TKP, 12th Congress of the Communist of Turkey received so many greetings and solidarity messages from the communist and workers’ parties around the whole world.