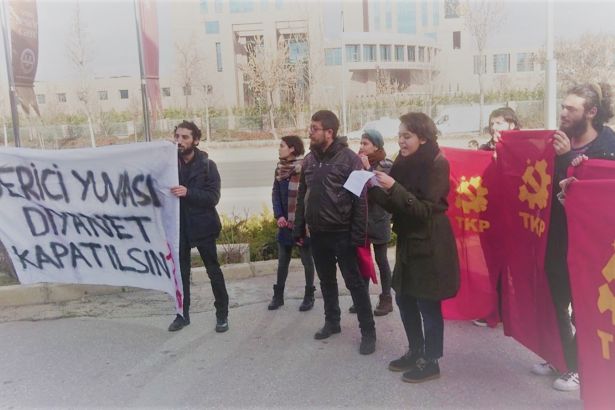 The Directorate of Religious Affairs, or Diyanet, was the target of protests organized by the Communist Party of Turkey (TKP)’s Ankara Provincial Branch on January 3, 2017, after the Directorate published a fatwa stating that 9-year-old girls could marry and give birth.

A press statement given by the protestors in front of the Directorate of Religious Affairs read "the nest of reactionaries that the Diyanet has become must be shut down!"

"This statement [fatwa] made by the Diyanet, an institution that not only remained silence in the face of the sexual abuse of 42 children at the pro-government Ensar Foundation but actively advocated for the criminals and molesters behind the scandal; in light of the increase of child abuse in Turkey, is an attempt to provide legitimacy to these reactionaries," the TKP stated.

Underlining that the most general definition of a secular state is the separation of religion from politics and public affairs organized by the state apparatus, the TKP stated that, "During the 15 years of reactionary rule under the Justice and Development Party (AKP), we have watched the appearance of religion in political and social spheres, the liquidation of the acquisitions of the secular state, and the condemnation of our working people to the darkness of the Middle Ages."

Stating that the Turkish government has re-purposed the Diyanet and other religious structures into tools in order to obtain the absolute power necessary to regulate social and governmental spheres, TKP members emphasized that "the progressive components of Turkey, our working people and our comrades struggling for the enlightenment will not allow (the AKP to obtain) this absolute authority, and we condemn both the Directorate of Religious Affairs and the reactionary sects and organizations behind this into the darkness they created."

"Today, the Diyanet is an institution that belongs only in an Islamic state; and not in a secular republic. The Directorate of Religious Affairs, now a nest for Islamist reactionaries, must be shut down!", the TKP concluded in its statement.