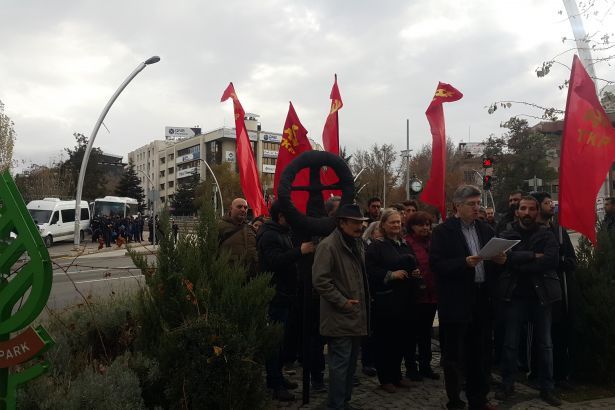 As communist parties around the world carried out similar protests against the Polish government, the Turkish police attempted to prevent protests in front of the Polish embassy in Ankara.

Members of the TKP protesting Poland read a statement in front of the embassy, stating that "The Great Socialist October Revolution, which we have recently commemorated the centennial of, is the greatest historical step towards putting an end to human exploitation. With the October Revolution, the establishment of socialism, and the equality and enlightenment guided by this establishment have gone down in history as an extraordinary experience."

"The imperialist system has always born hostile to socialism and has made every effort to destroy the Soviet Union. The attack of German fascism on the Soviet Union in 1941 is the most horrific of these efforts, and it marks the most barbaric massacre in history. History has documented the unutterable murders committed by the Nazis in Poland in this process," TKP members noted in their statement.

"Since the 1990s, the disintegration of the socialist front against counter-revolutionary forces in the Soviet Union and Europe has paved the way for a reactionary period that began with the dissolution of socialism. The rise of fascism and racism again is the most characteristic feature of this period. The organization of communists and the continuation of their political activities in various countries in Europe are under the process of being prohibited and criminalized by the governments of this period."

Stating that "We are upset that one of the leading countries promoting anti-communist practices is Poland," the TKP’s statement also underlines that "We are concerned that in Poland, the traces of socialist heritage are being removed; history is being consciously distorted; communists and fascists are being equated; the KKP’s right to engage in politics and organize is being precluded; communists are being prosecuted and condemned for their political activities…And we are protesting this situation."