"The notion that Turkey is now finished is ridiculous as much as the fairy tale telling that Turkey would be out of the woods simply by pursuing an unscrupulous alternative that approves all evils of the established order is unfounded. Everybody should know that Turkey will not yield to darkness" 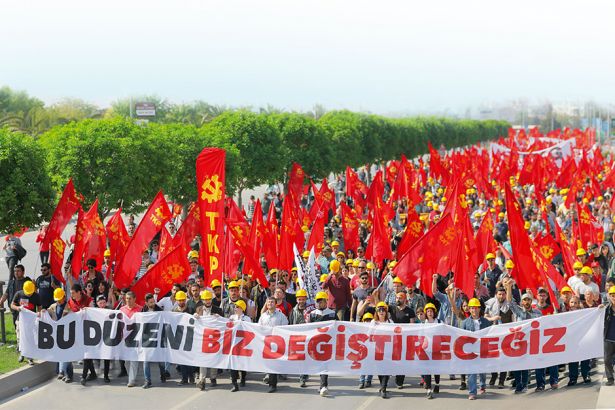 The Communist Party of Turkey (TKP) has released a statement on June 25 after the country held presidential and parliamentary elections.

On June 24, having been trailed behind a false hope, millions of people in Turkey were left high and dry once again. However, the notion that Turkey is now finished is ridiculous as much as the fairy tale telling that Turkey would be out of the woods simply by pursuing an unscrupulous alternative that approves all evils of the established order is unfounded. Everybody should know that Turkey will not yield to darkness.

1. When the decision to hold the “snap election” was taken, the Communist Party of Turkey issued a warning stating that elections to be held under these conditions would not be legitimate: “With the recent regulations carried into effect, elections in Turkey have become a show that would yield nothing but the result Erdoğan wants,” we wrote. “It is impossible to characterise this travesty as an election and taking part in an election which has long lost its very character as if nothing has changed would imply that being a walker-on in this show is welcome.” Even though our warning resonated with a large section of the population, the opposition of the establishment led by the Republican People’s Party (CHP) managed to absorb millions into an unfounded optimism once again, leading them to a naivete that says, “Don’t worry, they can’t do anything.”

Yet, the ruling party has reinforced its ability to manipulate the election which it mastered in former elections, especially in the last referendum, by fresh new regulations that have been enacted rapidly within this year and created a freakish electoral system which precludes imposing checks altogether. Despite this obvious fact, soon after the decision to hold “snap elections” was taken, the sections of the society that are opposed to the ruling party in Turkey have been convinced that “elections will be won in all probability”.

On the evening of June 24, millions of people thought that elections were rigged, but no one could either prove that or do anything about it. For, as we have always emphasised, disorganised people, chasing after myths created around certain figures is nothing but people left helpless. These elections proved once again that elections could be won only before, but not on the election day. It is impossible to keep track of elections with these voter registration mechanisms and the electoral system.

2. However, the most important truth revealed by June 24 elections is that simply electoral efforts would never provide a way out. Right after the Gezi Resistance, they have gone to great lengths to keep millions of people who rose against the AKP away from political organisation processes, which were, in fact, essential to have this massive popular movement endure. Elections, which have been presented as “the most critical point” at every turn, created successive frustrations, and “anti-Erdoğan” sentiments have become rather nondescript within the internal balances of the established order. One should know that getting organised is necessary even to achieve a minor improvement in Turkey. Unfortunately, a large part of the Turkish society took a fancy to the idea that “emancipation” might be possible without putting up a struggle; hence, they tagged along after their hero or heroes that they believe they have finally found. Another section of the society, on the other hand, have long submitted themselves to Erdoğan without questioning even their own existence and future. Such an antagonism would never give way to “emancipation”, but to the contrary, it would perish the society.

3. Even though the presidential system was rejected by more than half of the voters in the referendum held in 2017, adopting the idea that the very same system would open the gates of emancipation only after a single year passed have accelerated this degeneration. The idea to defeat a person who is believed to represent injustices and tyranny by another person who is believed to represent justice and freedom implied the denial of the very fact that the only antidote to injustice and tyranny is the organised struggle of the people. Yet, the main reason why “one-man rule” has been adopted so easily is that analyse especially the capitalists of Turkey support this system.

4. Before June 24 elections, international monopolies have provided significant support to a grand coalition which included the CHP, İyi (Good) Party, Felicity Party, as well as the Peoples’ Democratic Party (HDP), even though the latter did not formally take part in the Millet (the Nation) Alliance. The primary reason why Erdoğan could manage to beat this force is that the capitalist class does not wish to renounce any of the advantages it gained under his rule. Those who created Erdoğan have naturally acted upon their interests and fears while preparing his alternative. In this sense, all risks disappeared for the capitalists as they have safeguarded a political structure that would implement their own program with or without Erdoğan. Although we are passing through a period when the internal contradictions at international level as well as among the Turkish capitalist class have been intensified, these contradictions by no means imply that the ruling class lacks common interests.

5. It was international monopolies which asked to eliminate almost all differences between the AKP and the opposition of the establishment on essential issues during the electoral process. The right-wing opposition alliance with Akşener and Karamollaoğlu, which adopted all basic characteristics designed by the AKP government in the last 16 years, which came to terms with practices that have brought secularism down, which had no problems with NATO or the European Union at all, has persuaded Turkish society to an AKP regime without Erdoğan. They have gone so far in this respect that Muharrem Ince, the presidential candidate of the Nation Alliance, proclaimed that he might even appoint ministers from the AKP in his cabinet! Hence, the assault launched on progressive values for years on the common pretext claiming that “Turkey is a conservative country”, deceived and led the sections of the society who have been looking for a way out astray.

6. It would be ridiculous to analyze the June 24 elections in Turkey in view of the establishment parties. None of these parties received “real” votes. Millions of people in Turkey did not make a choice; they did not choose what they support. Instead, they supported those whom they believe are capable of solving the equation with multiple variables presented to them. The only reality about June 24 elections is that the so-called options within the established order are completely exhausted for millions of outraged and malcontent people in Turkey. The flagship of the official opposition, the CHP, is buried under the historic wreckage it imposed upon the Turkish society.

7.  Anti-Erdoğan sentiments, which have been a driving force for a long time and pushed the limits of the established order as they reached a peak during Gezi Resistance, do not have any value on their own anymore. Quite the contrary, anti-Erdoğan sentiments have pursued the role of Erdoğan’s twin in rendering this society helpless. What is fundamental is to take a solid stance against the established order, to put up a fight against exploitation, imperialism and reactionism. Similarly, Turkish politics must be immediately relieved from the dichotomy between the so-called urban and modern CHP supporters and conservative AKP supporters. After 16 years, urban and modern opponents of the AKP have been articulated to conservativism by the CHP and the HDP. The enlightened and patriotic inheritance of Turkey would rise up again only with a brand-new identity, with a pro-labour character, in worker’s overalls.

8. The Communist Party of Turkey assumed the responsibility to be the voice of the toiling masses and the quest to change the established order in June 24 elections. The word of the TKP, which had to run with independent candidates as it was not allowed to take part in the elections unfairly, made an indelible impression on large sections of the society. We were aware that this would not be translated into votes in the wild and woolly atmosphere of these elections, that independent candidates, who struggled with grave difficulties from the propaganda opportunities to the ballot itself, would not be able to overcome this grand illusion which involved millions of people. However, the TKP did not allow the electoral period to be devoid of the voice of socialism; the party came into contact with many workers and issued its warnings about June 24 and the post-election period, which have been verified in a short span of time.

The Communist Party of Turkey is carrying on its efforts to get organised, to struggle, with great zeal. In the forthcoming days, the authorised committees of the party will determine a comprehensive roadmap to save those who stand with the left and the toiling masses of Turkey from despair and helplessness. Our party is the only of hope of those who say, “you are right, but let this election pass first”, and it will act upon this sense of responsibility.

9. An election can neither bring emancipation, nor be an end or bring absolute darkness on its own. Yes, millions of people have been left high and dry in Turkey on June 24, but the notion that Turkey is now finished is ridiculous as much as the fairy tale telling that Turkey would be out of the woods simply by pursuing an unscrupulous alternative that approves all evils of the established order is unfounded. Everybody should know that Turkey will not yield to darkness.