Communist Party of Turkey gathered thousands of people: Socialism will suit very well to the Republic 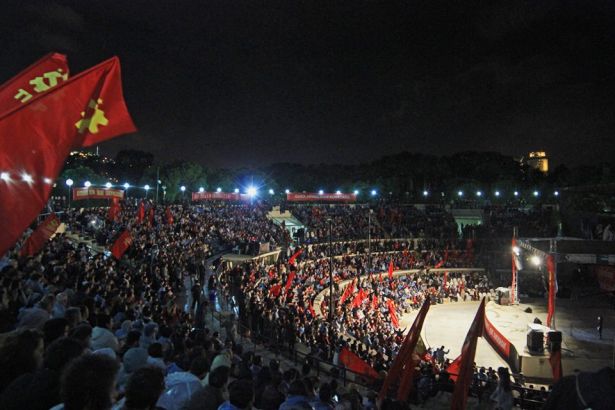 The event of TKP, which is dedicated to the 100th anniversary of the Great October Socialist Revolution led by the Bolsheviks in 1917 and the 94th anniversary of Republic of Turkey’s foundation in 1923, attracted striking attention despite rainfall with the attendance of thousands of TKP members and friends.

The event, "Socialism will suit very well to the Republic", started with a performance on the October Revolution in 1917 and its achievements for humanity.

Kemal Okuyan, the General Secretary of the TKP, delivered a speech during the event. Arguing that the question, “When did the communists become republicans?" is a superficial one, Okuyan dwelled on the historical bridge between the modern revolutions and the stance of communists:

"Modern history starts with a great revolution; The French Revolution, in 1789. It has almost been 230 years. This revolution opened way to the foundation of the first Republic in France, in 1792. Afterwards, in 1804 the French Empire was proclaimed  In 1848 the revolutions shook Paris again and the republic was re-built. In 1851 it was demolished for one more time. In 1870-1871 the working class in France stepped in. The Paris Commune, the rule of the working people, re-established the republic. The origins of the song that we shall sing together at the end of this night, ‘The International’, come from this Commune. And who demolished the Republic that was founded by the proletariat of Paris? Hitler, the bloody-handed dictator of the German monopolies. This same person in 1933 was the one that demolished the first German Republic that was founded in 1919 again by a revolution. In Spain the working class, the communists defended the republic that was founded in 1931 and finally turned over Franco, the favourite man of the bosses and landlords." 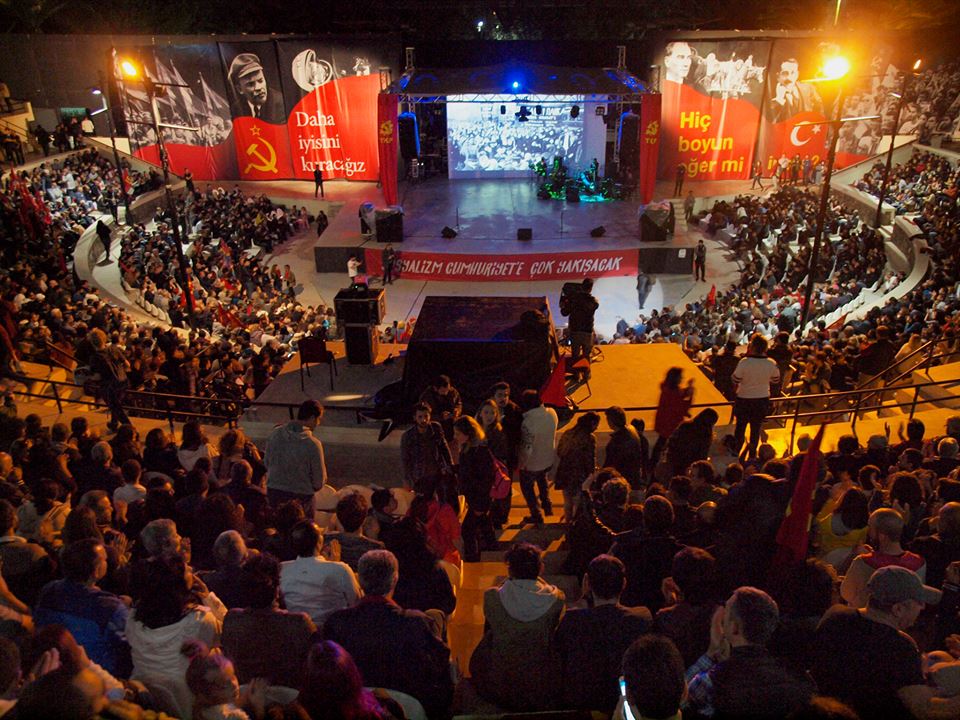 Indicating that the working class named its power as a socialist republic following the October Revolution in 1917, the first socialist revolution of history, Okuyan continued that in the whole of this story, the communists have always stood by the republic against the obscurant forces, the bloody dictators of monopolies, the bigots, the priests, the kings, the sultans and exploiters.

"Republic means popular will that represents not a God nor dynasties but the People. Kings, sultans, shahs, sheikhs, and tsars; they all rule on behalf of dynasties or God. Instead, the popular will has two aspects. The people are equal and not governed by religion. If the holy one gets in the way, there is no longer a republic,” Okuyan said with reference to the republican roots of Turkey planted in 1923. 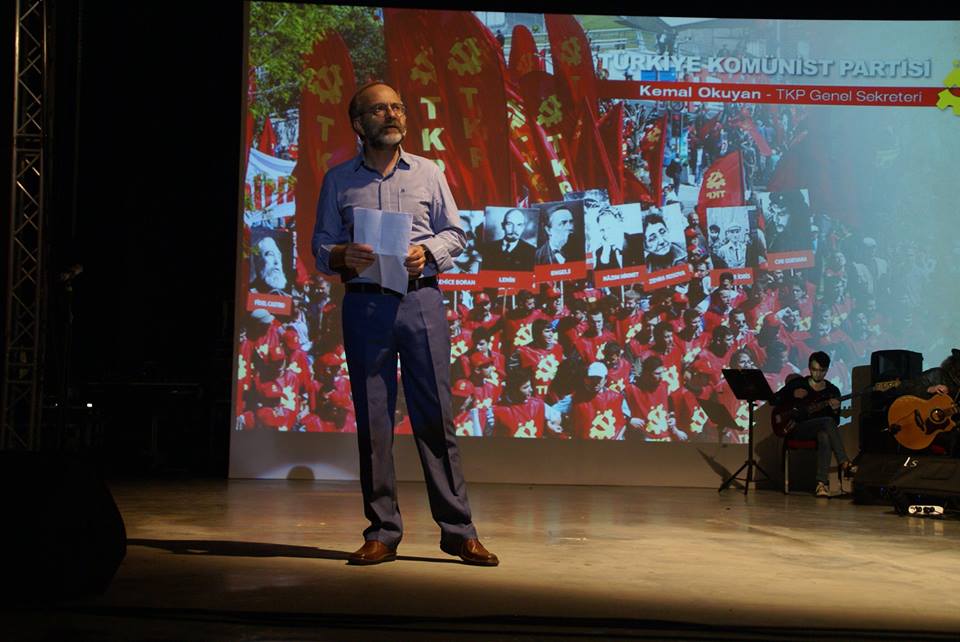 Arguing that the capitalist exploiters and imperialist forces hide behind the "sacredness" in order to undermine the secular and republican values for a wider exploitation, Okuyan said, "We cannot interfere with the religious beliefs of the people but just because of this deceit we have to pull the pin of the ones that are hiding behind religion."

"Excuse me, but we do not, we cannot call this a republic," Okuyan continued, adding that Turkey is a country that is being governed with "holy texts" in violation of the principle of secularism. Okuyan puts forth that Turkey is no more a secular and an independent country in the absence of sovereignty and popular will, considering the adjustments pursuant to the European Union, the ‘strategic partnership with the U.S. and the membership to NATO.

"The ruling classes possess the media, money and use religion as well," Okuyan said, and gave a striking example for the absence of popular will in Turkey. “Look, in 2019 the presidential election will take place. We need 100.000 registered signatures [for candidacy]. This costs 10-15 million Turkish Lira. For the Palace (of President Erdoğan], this is nothing. But, does anybody here own 10-15 million Turkish Lira? The votes are equal but people are not!"

TKP'S 'SOCIALIST CONSTITUTION': FREE PUBLIC SERVICES FOR ALL CITIZENS, 'NOT A PENNY TO CAPITALISTS'

During his speech, Kemal Okuyan cited some articles from the "Socialist Constitution", a basic constitution draft prepared by the TKP, which will enter into force in socialist Turkey.

"The Republic of Turkey, without any discrimination as to language, religion, race and sex, is a sovereign socialist state that represents the common will and defends the interests of the working people, peasants and all labourers," Okuyan read Article 1 from the 'Socialist Constitution'. 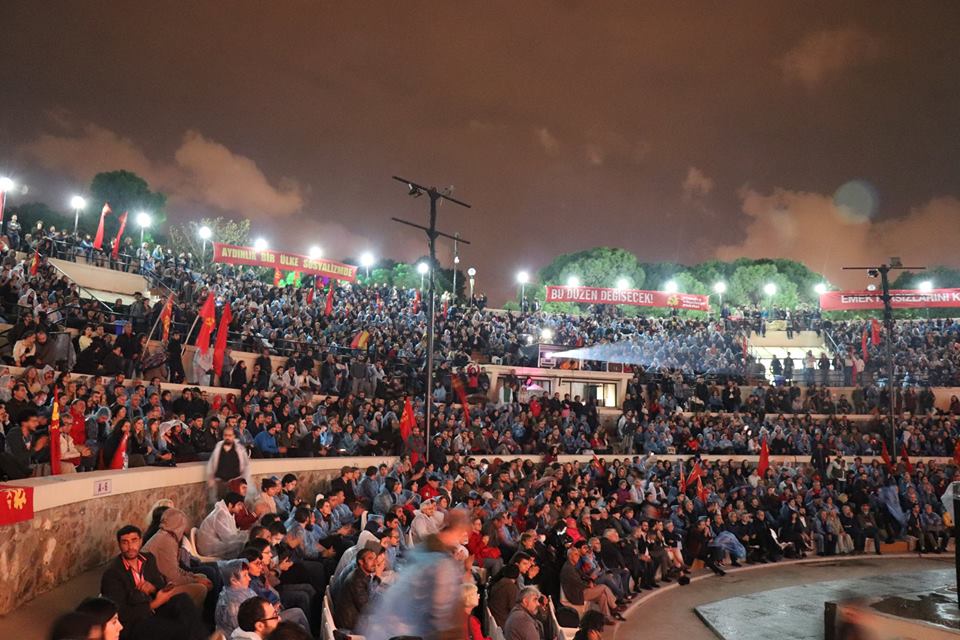 Okuyan cited 5 introductory Articles, submitting them to the approval of the event’s participators, entire of which were cheerfully approved with applauses and slogans. In addition to the TKP Constitution’s articles adjusting the principles of secularism and sovereignty under socialism, Okuyan continued, "Not a penny to Koç, Sabancı, Ağaoğlu and the rest exploiters. Not a penny to the Palace. This is what we shall do: Stop the leakage. And we will have the sources for building a developed classless society," underlining that all the citizens will benefit from free public services such as housing, heating, energy, water, and access to cultural life while the capitalist exploiters will be exempted from such basic rights.

Stating that the decrees and articles of the Socialist Constitution shall be under the guarantee of the organized society, the communist party general secretary Okuyan continued: "Here we are not referring to the army, but the society. We are referring to the workers, youth, students, peasants, intellectuals, i.e. the main articles in the Constitution are under the guarantee of all the people. The army shall be the army of the people, not of the palace or NATO."

"During the day not being exploited, at night not sleeping hungry," Okuyan summarized socialist living conditions with reference to a famous poem of renown Turkish communist poet Nâzım Hikmet.

"SOCIALISM WILL SUIT VERY WELL TO THE REPUBLIC!"

"Do we want this? Is this possible? In 1917, the people who believed in this took action. In the Soviet Union, all the above came true. They passed the sea but they got drown in the river. They made some mistakes, they underestimated the enemy, i.e. imperialism, capitalism. The Soviet Union was demolished,” Okuyan said, pointing out to the historical achievements and today’s need for a socialist revolution in Turkey and other countries.

"So, what shall we do? We shall build another, stronger republic. Socialism will suit very well to the Republic!" Kemal Okuyan concluded his speech.

Following Okuyan’s speech, the event continued with artistic performances of TKP member or friend musicians, theatre players, dancers and poets. The declaration of the European Communist Initiative was announced while the KKE and PCPE representatives greeted the event and participators. The event, "Socialism will suit very well to the Republic", ended with the live performance of the International anthem chanted by thousands of people.