'Clinton and Trump have only tactical differences'

Socialists are participating in the U.S elections as well: Only a complete overturning of capitalism can realize the tremendous potential of humanity 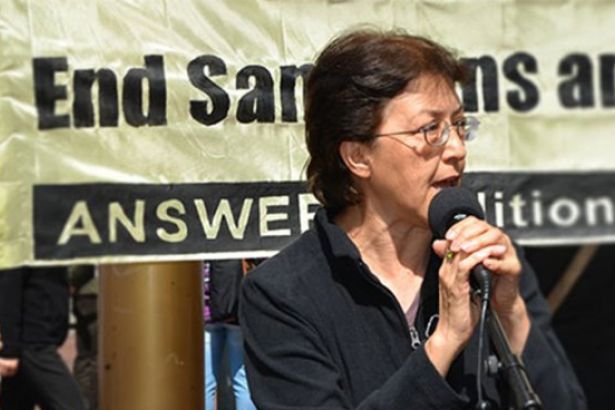 Due to the choices of monopolistic system, imperialist-militarist state structure and anti-communism, only two parties and two candidates are visible in the so-called "fortress of democracy".

But today in the U.S. elections, there are other candidates such as the candidate of Greens Jill Stein, Libertarian candidate Gary Johnson and the candidate of Party of Socialism and Liberation, which continues its socialist struggle without concessions, Gloria La Riva.

We talked with the candidate of PSL on the policies of presidential candidates, electoral system of U.S., U.S. economy and the Middle East policy of U.S.

"ELECTIONS IN U.S. ARE ANTI-DEMOCRATIC"

Why is the Party for Socialism and Liberation running in the elections, in a political system designed for two parties? What does PSL think about two-party system and U.S. democracy?

The U.S. electoral and political system is the system of the ruling imperialist class. As such, it is one of the most important mechanisms to maintain its rule. The elections in the United States are one of the most anti-democratic in the capitalist world. For example, even though the presidential election is national, a candidate or party is required to apply for ballot status, state to state, and the requirements vary widely. It takes literally about a billion dollars for one of the two bourgeois candidates to run a campaign, so of course, that makes it necessary for those parties to be wholly responsible to the corporate donors. Then is the problem of access to the large-scale media, which engages in a fierce censorship of other candidates.

And yet, with this inaccessible scenario, our Party has participated in every presidential election since shortly after our founding. We do this because as Leninists, we believe it is essential to be where the masses are, to speak in the name of socialism and struggle as the only way that the crises of the working class and society as a whole can be overcome and resolved. If we were just to criticize from the outside without intervening in the electoral arena, we would not have meaningful access to the people, who still see the elections as the means for political participation.

We have had this year a tremendous experience, with our members and supporters in city after city, reaching out to so many communities, joining in the struggles and helping lead some, with our political program, which has received a positive response and interest from many. We also encourage those who are more interested than in just voting for an alternative candidate and party, to join our Party, which many have done.

We have helped give visibility and popular support to key struggles this year, for instance, when I and other members have traveled to North Dakota to support the great Native resistance struggle against the Dakota Access Pipeline. Our vice-presidential candidate in several states, Dennis Banks, is a well-known Native leader, co-founder of the American Indian Movement, who has been a continual presence there. This struggle is the most important environmental movement in the United States in years, and largest, most united movement of Native people in more than 100 years, with more than 450 Native tribes and nations who have joined together.

We have been part of dozens of protests and manifestations against the brutal police killings of Black and Latino people, defending people against evictions, marching against the US-Saudi bombing of Yemen, organizing protests against the U.S. proxy war against Syria.

"CLINTON AND TRUMP HAVE ONLY TACTICAL DIFFERENCES"

By the time you are able to publish this, perhaps the new president will be elected. It looks like it may be Hillary Clinton, since her close numbers seem to be improving in the last hours, due to the intense media push for her, and the fact that Republican and Democratic leaders alike are behind her. But we see that there would be little difference, perhaps small tactical differences, and certainly in their images. The public perception is different, although both candidates are greatly disliked. I can attest to the exhaustion that the mass of people feel, by us talking to so many thousands in the streets, in public events. There is a great feeling of distrust, anger at their justified perception that one, Trump, is a disgusting racist, anti-woman and overall bigot, and billionaire who has gotten away with huge tax breaks; While Clinton is seen by many as being in the pockets of the biggest banks, as a proven warmonger, and not trustworthy. Yet, there is definitely more fear of Trump. And that is the reason that Clinton will likely win, purely out of fear of Trump, and of course for many because she is a woman.

It is virtually a smooth transition from one president to another in terms of neoliberal policies that have intensified, whether it was NAFTA, the North American Free Trade Agreement of President Clinton, to President Obama's Trans Pacific Partnership, or the growing militarism, from the Gulf War of George H.W. Bush, to Clinton's continuation of the genocidal sanctions against Iraq, to his bombing of Yugoslavia, to Obama's support of the Honduras coup and the destruction of the Libyan state, notably with Hillary Clinton as Secretary of State. The fact that most Republican leaders have all given their support to Clinton is because they fear the potential instability and perceived illegitimacy of a Trump presidency.

The U.S. president is simply the CEO of U.S. imperialism, and whomever is elected will pursue those objectives. Of course, history has shown us that when a truly mass movement arises, such as the great civil rights struggle of the African American population, especially in the South, even reactionary politicians can be forced to change their position and make concessions. We see the potential for mass movements developing in this coming period, as some are already on the march.

"SECULAR GOVERNMENTS IN MIDDLE EAST ARE PARTICULARLY TARGETED BY US"

What do you think about U.S. policies in the Middle East?

The U.S. has undertaken a highly-destructive, genocidal offensive for more than 25 years now since the Gulf War, in the Middle East and nearby regions. But of course, since U.S. imperialism's emergence as the dominant world power after 1945, generally unscathed by World War II, it has continually waged one aggression after another on each continent. There are too many to mention here. With respect to the Middle East, we have been determined opponents to the U.S. wars and occupations, which of course includes its funding and backing of Israel's genocide against the Palestinian people. Many of us — even before our Party's formation — were involved in defying the U.S. blockade of Iraq, taking massive shipments of medicines into Iraq. We are very active in the ANSWER Coalition, Act Now to Stop War and End Racism. Every independent state, especially secular government, have been particular targets of the United States, because they are seen as obstacles to full U.S. domination of the region.

We are fully opposed to U.S. funding of billions of dollars in military and other aid to the reactionary governments, whether Israel, Egypt, Turkey, Saudi Arabia, Qatar, etc. etc. Syria is of great concern to us, and we are writing articles in defense of the Syrian government and people, as well as supporting Syria's right to seek the assistance of Russia. Political clarity and an anti-imperialist perspective regarding Syria are absolutely essential to convey not only within the progressive movement but to the public as well. That we have done during our presidential campaign, another advantage for us in being able to reach a larger audience than we would have been able to do otherwise.

We never fail to warn of Hillary Clinton's openly stated intentions, starting with a U.S.-imposed no-fly zone that would lead to war. It is stunning, the recklessness of Clinton and her hostilities against Russia. We have often pointed out that her foreign policy advisers and future team, if she wins, will be the most hardened neoconservatives, like Rogert Kagan and Victoria Nuland. Clinton's doctrine draft, one of whose architects is Michelle Flourney (who may become the next Secretary of Defense), the "Campaign for a New American Strategy," spells out the objective of expanded American dominance in the Middle East, Africa and Europe (directed against Russia), as well as eliminating the "military budget cap," as if there were any kind of restrictions to the Pentagon's unlimited budget!

"REVOLUTIONARIES SHOULD BE PREPARED"

In addition to the fact that, according to U.S. government statistics, half of the population is poor or near poor, there are millions more who are economically insecure, who lack medical care, or who are a paycheck away from poverty. This happens at a time when the wealth of the "1%" has grown astronomically. Of course the wealth at the top is because of the capitalists' increased exploitation over the last 30 years while wages have been stagnant for many years. The 2007-2008 financial meltdown hit the working class and poor very hard, bringing many national pensions to the brink of collapse, and 3 million families lost their homes due to bank foreclosures, and student debt grew to $1.3 trillion dollars! Yet it was the banks that were bailed out by more than $700 billion, which taxpayers had to pay for ultimately. The same speculative actions of the bankers to maximize their profits, plus the cyclical crisis of capitalism, the drop in world commodity prices of oil, minerals and other key resources, overproduction in many other industries, all this points to an inevitable new economic collapse.

Each crisis leaves capitalism and the working class worldwide in a more precarious position, while the environment suffers intensifying degradation. It is critical for revolutionaries to be prepared, to build our organizations, to deepen our roots in the working class and fight the reactionaries' and ruling class's solution, which is war on the workers and repression. We believe, in spite of the growing economic crisis, that there is reason for optimism, because more and more people are becoming consciously anti-capitalism, and more are open to the ideas of socialism.

We believe that only a radical transformation of society, a complete overturning of capitalism, can realize the tremendous potential of humanity, on a socialist, sustainable basis.

That was the purpose of our socialist intervention in the U.S. elections, to educate, agitate, and grow the movement on a revolutionary basis, to join in unity with all popular movements and people wanting to work and struggle for real and lasting change.

We thank you comrades for your invitation once again and opportunity to express our views. We are in full solidarity with you in your struggle in Turkey.