The Çelik embroidery factory, which is located at Çiğli Atatürk Organised Industrial Region, works for Üniteks and Cu Textile and does the printing and embroidery for the brands including Zara, H&M, Bershka, Tommy Hilfiger, Decathlon, and Mango. The workers for the Çelik factory have obtained their first gain. 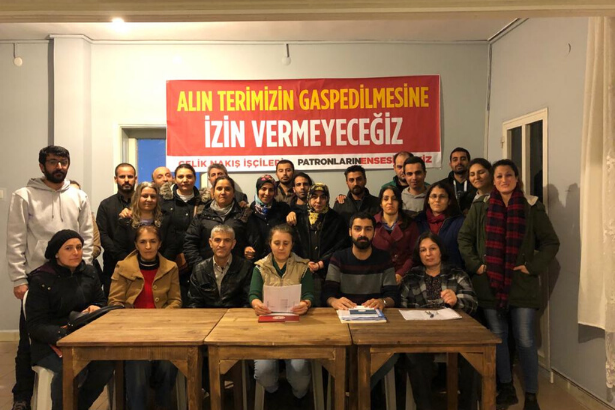 Following the bosses of the factory, which consisted of printing and embroidery, ran away with the machines, the workers announced they would undertake resistance. The workers, who worked at the printing section, undertook certain actions in cooperation with the "We breathe down the bosses’ neck", the solidarity network initiated by the Communist Party of Turkey (TKP), and obtained the majority of their rights.

The press release is as follows:

The textile workers are subjected to deteriorating exploitation every single day. Part of the reason is their greed and the other part is that the workers are unorganized. Through this resistance process, we learned that organized workers would never be defeated. We breathe down the bosses’ neck brought us together and taught us that through the organisation we would gain our rights. We would like to thank them.

We are some of the workers whose rights were ripped off, and we thought Üniteks, Cu Textile, Inditex Group consisting of Zara and Bershka had responsibility. Our struggle scared the capital groups, and they were compelled to respond to our demands. We will continue with our struggle next to our friends who work at the embroidery and digital sections. We will not leave our friends alone until Üniteks, Cu Textile, and Inditex would give what our friends deserve. We will not let the bosses divide us and make us work like slaves. This is the beginning of our struggle. We will struggle against subcontracting, fraud insurance, overworking hours, and insecure work. The unity of workers would defeat the bosses.

The workers, who worked for Çelik Nakış factory with a total of approximately 130 workers located in Turkey’s western province of Izmir, have been destitute of their rights following the embroidery division of the factory was shut down by the employer in August 2019.