AKP is celebrating its 16th year nowadays, which is full of misery and violence. During these years, public assets have been plundered and at least 20 thousand workers have been killed in occupational murders 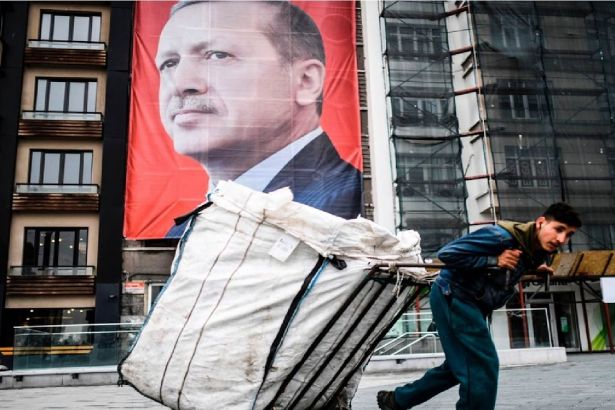 A man pulls a cart in front of a portrait of Turkish President Recep Tayyip Erdoğan.
  

The ruling Justice and Development Party (AKP) of Turkey is celebrating its 16th year nowadays, which is full of misery and violence. During these years, public assets have been plundered and at least 20 thousand workers have been killed in occupational murders.

Since 2001 when it was founded and 2002 when it came to power, the AKP government has never compromised its policies against the working class.

Following the political crisis in 2001, AKP was founded as a project of the US, establishing political Islam as an ensured state policy of Turkey.

During the rule of the AKP, marketisation and reactionism has closed ranks even more compared to other periods in Turkish history. Neoliberal attacks have become more systematic.

PLUNDER BY MEANS OF PRIVATISATION

Privatization was not the invention of AKP, and yet the fastest and the most systematic privatisation of public heritage has happened during its rule.

Giant public institutions, industrial facilities, harbours and valuable lands have been sold one by one. International monopolies have been implicated in the sales of public institutions of strategic importance. 55% share of Turkish Telecom was sold to Oger Telecom, 51% of TÜPRAŞ (Turkish Petroleum Refineries Corporation) was sold to Azerbaijani petroleum monopoly SOCAR and Turkish tobacco and alcoholic beverages company TEKEL's tobacco factories were sold to British Tobacco. TEKEL's factories of alcoholic beverages were sold to Mey, a domestic private firm. Mey sold its shares for their twice and a half price to TPG, a US-origin firm, which sold it five years later to British Diageo for a price ten times more expensive. 14,6% of TÜPRAŞ, 26% of Turkish Airlines (THY), 25% of PETKİM (Turkish Petrochemistry), 17% of Halkbank (one of the biggest state-owned banks) and 9% of Turkish Telecom were sold to foreign investors.

86% of all privatisations of the past 30 years had been done during the AKP period.

The number of free economic zones has increased to 21 during the AKP period. As zones where legal and administrative regulations regarding commercial, economic and financial activities are suspended or partly implemented, free economic zones work for the benefit of the bosses.

During the rule of AKP, at least 20 thousand workers died in occupational murders. The most massive of them happened in Soma mine blast, where 301 miners were killed.

AKP banned workers' strikes more than any other government in the history of Turkish Republic. AKP banned 13 strikes announced in different sectors ranging from industry to banking sector.

During AKP rule, precarious, flexible and uninsured work have become more common. The period of on the job training of workers have risen to a year from 6 months, enabling the bosses to employ trainees for a year whose salaries are covered by the unemployment fund.

Private employment agencies have been established last year, enabling the employers to exploit subcontracted workers. More than 400 firms in Turkey subcontract workers to other firms.

AKP has passed almost all legal regulations by means of omnibus bills. Flexibilisation of working hours, or flexicurity in popular terms, has been introduced during the AKP period. The regulation of "rental worker" was passed in 2016, allowing the bosses to hire workers without providing insurance.

The most important state owned enterprises were transferred to sovereign wealth fund, to the benefit of the capitalist class. These state assets worth tens of billions of dollars. AKP established a company to manage the wealth funds and then transferred public assets and state shares in Turkey’s major public companies into this fund.

ATTACK ON THE SEVERANCE PAY

AKP also attacked one of the most important gains of the working class. On July 7, 2017, the government announced that a severance pay fund to be established, relieving the bosses from the obligation of giving severance pay to their employees.

PRESIDENT ERDOĞAN AS THE "CHIEF CEO": AN ALLY OF THE BOSSES, ENEMY OF THE WORKERS

Turkish President Erdoğan calls himself the "CEO of Turkey" and has proved that during the past 16 years of his party's rule. He rules the country as if it were a corporation and it means the absolute poverty and dispossession on the part of the working class. The decrease in wages, attacks on the gains of the working class, increase in flexible and uninsured works, savage exploitation and occupational murders have been the attacks of the AKP rule for 16 years.

Flexibilization of labor in Turkey