Beyond the virus: The challenges awaiting us in 2021

The challenges ahead of the people of Turkey in 2021 cannot be separated from the challenges awaiting peoples of the world posed by the threats of imperialism on humanity and equal development. “The thousand chains” remain to be broken 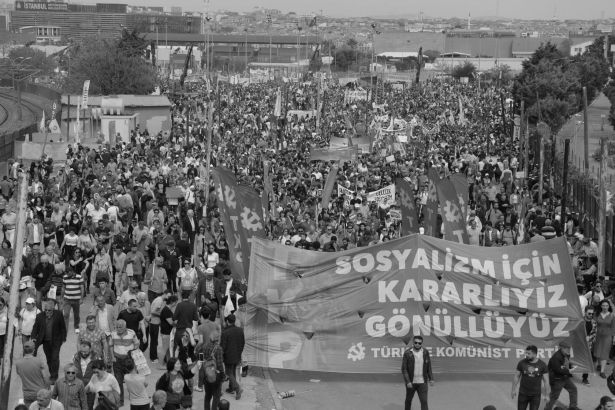 Ekin Sönmez, the CC member of the Communist Party of Turkey (TKP), commented on the challenges awaiting Turkey in 2021 via an article published in the Chilean left-wing magazine Revista Rosa.

The English translation of the article is as follows:

To assess the main challenges of 2021, we will first need to look at where we have come and what the past years have brought to the working class's lives.

2020 was marked by a worldwide spread of the novel coronavirus, a pandemic comparable with the Spanish flu a century ago. The Spanish flu lasted two years, and it is said that about a third of the world population was infected. Now, a hundred years later, another respiratory virus has evolved and spread around the world, creating a pandemic that does not seem to cease earlier. Despite century-long developments in science, technology, and the general increase in the level of knowledge, the world could not combat the virus. The only reason behind this tragic outcome can be found in how today’s capitalism operates in each country and as a global social order. The basic contradiction at the root of capitalism and the uneven development it has created can be observed in this very simple but grave problem: The best hygiene practice against coronavirus is hand-washing, which was a luxury for 3 billion people of the world in the year 2020.

So, we have entered 2021 with the coronavirus being at the center of our lives, and most probably, it will remain to be a big challenge throughout the year. Before discussing how it will affect the working class and our struggle, especially in this part of the world, let’s examine the scenarios around Covid-19. As this is an infectious disease, blocking the chain of spread is the essential strategy to fight it, which brings us to vaccines as the main method.

Scientists say that about 120 million doses of vaccine are necessary to reach population immunity in Turkey. In contrast, the government has only fixed contracts for only 50 million doses with the SinoVac firm and a few million doses with the German-US joint initiative Pfizer/BionTech. This number is far below the necessary amount of vaccines, and there remain serious questions. Who will benefit from these vaccines? Will the reserved amount (because only 3 million doses out of the 50 have arrived in the country) be equally and transparently distributed among those in need? And also in a timely manner? Who will supervise? Who will make sure that the poor strata of the society will receive their shots? These questions are very valid because, throughout 2020, the reactionary and market-oriented AKP government had shown total mismanagement of the health crisis. The lack of central planning and the outcomes of over three decades-long transformations of the health system into a profit-based one caused thousands of losses, patients and infected for no reason at all. The government could not, and actually not chose to, provide masks, hygienic material, and mass testing for all people. Instead, to make sure that the capitalist class is profiting, they allowed many workplaces to run during lockdowns, did not support public needs, such as transport, with extra resources and did not tend to even partly nationalize the private healthcare institutions to supply the drastically increased healthcare needs. Even the statistics and how they were displayed were manipulated in a way that at one point, the Ministry of Health had to withdraw a report submitted to the WHO. And I am only speaking about the health effects of the Covid-19 here.

Of course, the inability to secure enough doses of a vaccine has to do with the hierarchy within the imperialist system, reflecting on how vaccine distribution will occur. Inevitably, this will cause great inequality among many countries. Imperialist countries have already secured deals that will guarantee the delivery of a high number of doses, as high as a few times more than their vaccine needs. Because of the initial uncertainties and the urgent need to curb the economic problems, stagnation in production caused by the pandemic, the first waves of vaccination are free-of-charge in many countries, although not compulsory. We may expect that once this initial wave is more or less complete, it will be put on the market as a commodity. In 2021, people should raise the struggle against vaccines and healthcare commodification in general and for the removal of patent charges on vaccines and medications.

When we think of the pandemic's social and economic effects in Turkey, we observe a severe economic crisis marked by the currency's devaluation and extremely high foreign debts that coincided with an imperialist hegemony crisis worldwide. The pandemic has deepened the class conflicts and has proven the barbarity, the chaos and the deadlock of capitalism. The pandemic enabled the capitalist class to quickly introduce flexible, short-term and remote forms of labour, which had been considered for some time but was only possible in the face of these extraordinary conditions. The past year was a year for many capitalists to test these methods that lowered the costs and increased the rate of exploitation. And we can say that the test was positive, which can be observed by looking at the high profits of big monopolies in Turkey even after such a year. The biggest conglomerate in Turkey, Koç Group, had almost doubled its net profit from about 4.5 billion Turkish lira (TL) to 9 billion TL in 2020. Unfortunately, 2021 is expected to become a year in which these working forms will prevail and remain permanent for many sectors, undermining workers' rights, eliminating the historical achievement of eıght hours working day and bringing about ghost workplaces no one can socialize and have human contact.

We can expect the crisis to continue and remain the predominant source of problems for the working class. In contrast with the mounting profits of capitalists, by the end of 2020, Turkey's broad-defined unemployment rate was 27%, which is over 9.5 million people. The unemployment rate reaches a peak level among young people between 20-35. Many of them are compelled to accept temporary jobs with poor wages at the beginning of their adult lives. Moreover, another 10 million women, who are categorised as “housewives” and not included in the employment statistics, are also practically unemployed. Both the unemployed and those who were lucky enough to have a job are facing economic problems and cannot afford their lives. Therefore, many people are resorting to credits and debts to cover their expenses, which is ending up in a vicious cycle of expropriation. We can clearly grasp this in the fact that every 1 out of 3 people cannot pay their credit card debt. And population polls point that 70% of the unemployed are hopeless about finding a new job soon in the future. There are no signs that indicate any decrease in the rate of unemployment and indebtedness of waged-labourers. Students, retirees, women, and refugees will probably remain among the most vulnerable sections of the population, which necessitates a much thorough discussion beyond this short article's limits.

Yet against these challenges, it is unfortunate that the rate of unionization is only about 5-6% of the whole, compromising the working classes' bargaining power. Today, the main challenge in Turkey’s society that we as socialists should struggle to overcome is the lack of an organized and united working class. People are atomized, individual interests constitute the main concerns of many, collective thinking and acting is diminishing. Hopelessness and nihilism are spreading, perhaps even faster than the virus. Under these conditions, our duty is to uproot the working-class values such as solidarity, friendship, equality and justice and make them hegemonic in the thoughts of working people again. Thankfully, these values have not totally disappeared, and the example of socialist countries such as Cuba is still brightly inspiring peoples of all the world.

As of 2021, the reactionary AKP government, whose main mission can be defined as to undermine Turkey's republican foundations and foster the dictatorship of the capitalist class with its Islamist policies, will be enjoying 19 years of power. The government's constitutional changes are now allowing to concentrate all power in the hands of the executive, namely the cabinet of Erdoğan, who uses it for facilitating the profit-maximisation of the capital. The dose of violence in society and the oppression on people, media, and especially left-wing politicians using judiciary and executive powers and religion's influence is increasing. This is expressed as mobbing at the workplace, police repression in the streets against people’s resistances and violence against women in all spheres of society.

Finally, we can take a look at the international developments within the imperialist system. One may expect the strengthening of the Euroatlantic pact and the bonds of countries within NATO following the US presidency's handover to Biden. The pragmatic administration in Turkey, whose main strategy (or non-strategy) was to set its game up according to the conjunctural gaps within the imperialist dynamics, is also showing signs of steering more towards Western imperialism, and a rapprochement with the EU can be observed. The government aims to benefit from the positive relations with the EU, the main trade partner of Turkey, and implement some so-called economic reforms that will only benefit the capitalist class. Of course, Western imperialism's predominance in the region has never had and will never have a positive outcome in the region. The recent deal of Israel with the Gulf States may alter the Middle East's power relations, resulting in even greater isolation of Palestinian people and increased pressure towards the war-torn Syria and Iran. The Turkish government is also warming up its diplomatic relations with Israel, and even Egypt, keeping an eye on its share within the division of resources in the Mediterranean and the fulfilment of the Turkish bourgeoisie’s wider claims in the region. The risk of a hot incident in the region, the Aegean, the Mediterranean and the Middle East is always present. Another indicator of this is the increasing degree of militarization with increased war budgets in many capitalist countries in the wider region despite the pandemic, yet no or minimal increase at all when health budgets were considered.

In sum, the challenges ahead of Turkey's people in 2021 cannot be separated from the challenges awaiting peoples of the world posed by the threats of imperialism on humanity and equal development. “The thousand chains” remain to be broken. Facing these challenges is only possible with a clear anti-capitalist, anti-imperialist stance, an organized counter-attack of workers, based on a solid program towards the only way out of the disasters caused by the virus of profit. This program is socialism-communism.