Presidents of provincial bars arrived in Ankara in the course of the “March of the Defense” amidst police intervention. 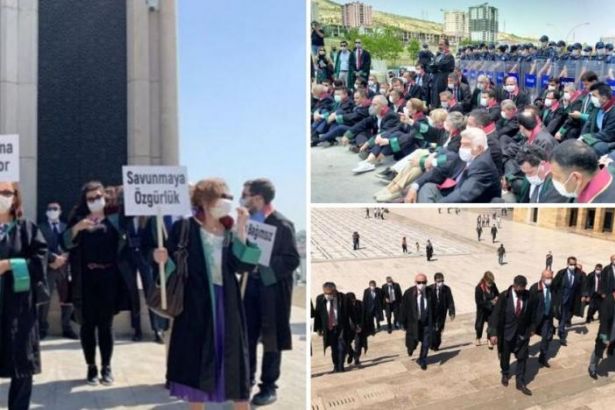 The chairpersons of bars started Friday a nationwide march from their towns to Ankara to protest the government’s draft on multiple bars in big cities. The police obstructed the demonstration at the entrance of the capital.

During the commotion, the security forces attempted to arrest and pound several presidents. Then the lawyers sat in against the police barricade. As the officers surrounded the attorneys by roadblocks, members of the bars protested the arrogance of the police force in several towns and courthouses.

İstanbul Bar Association called for a gathering in front of its headquarters as several other bars made press statements and organized an Honor Watch. Ankara Bar’s officials stated that the police intervention has no legal ground and that they are determined to complete the march to Anıtkabir, Ataturk’s tomb.

Meanwhile, the pro-government president of the Union of Turkish Bar Associations visited the monument as a show-off against the protesting lawyers. Though a small number of attorneys attended the event with the head of the union, those lawyers later turned out to have taken the shortcut to the place unintentionally getting in the same picture with the disputed president. Then, they joined the protest in the doorstep of the city.

Abdülhamit Gül, the Minister of Justice, made a statement regarding the developments mentioning that the draft is not ready yet and that the attorneys grumble for nothing.

Moreover, the Ankara Police Department stated that the police intervened in consequence of the pandemic measures. Yet, most of the police officers in the scene were unmasked.

Metin Feyzioğlu, the head of the union who recently turned out to be Erdogan’s ally also tried to get into the picture with the protesters as the mediator. However, the attorneys backlashed as they linked arms to fend him off.

Lawyers gathering for sit-in protests in remote towns chanted slogans like “Noone can silence the defense”, “Solidarity against fascism” and “We will never bow down”.

The presidents stayed up all night in the place resisting the chilly weather, the rain, and the second wave of the police attack. The security deployment also blockaded the nutrition and blanket aid from the outside throughout the night.

The police had to lift the fence the next day as the lawyers eventually managed to finalize their march towards Anıtkabir.

The lawyers nationwide criticized the government’s attempt to amend the bar legislation aiming to dissolve the integrity of professional organizations as well as the excessive use of force by the police.