The Democratic Progress Institute (DPI) held a meeting in Albania’s Tirana. The London-based institute seeks for a new “peace process” in Turkey with the support of the U.S. and the EU 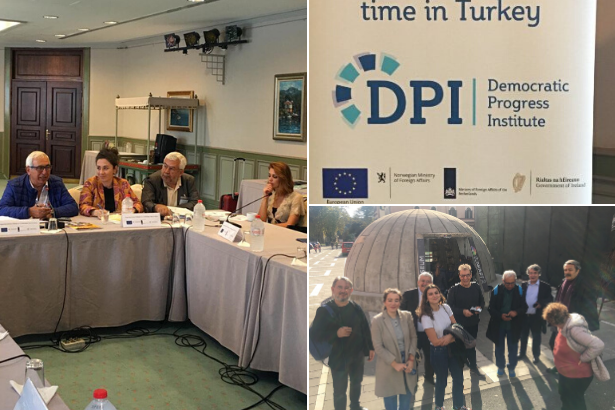 Formed with the initiative of some Turkish liberal intellectuals, the London-based DPI includes some foreign intellectuals, as well as some well-known Turkish journalists and artists who supported the AKP government at critical political turning points in Turkey.

The recent meeting of DPI was carried out on November 25-28 in Albania’s capital city of Tirana when the southeast European country was hit by earthquakes that killed 30 people. As the Albanian people were intensifying rescue efforts, the “wise people” of DPI were having “cultural tours” and visiting the museums in the quake-torn city.

DPI describes itself as an “independent non-governmental organization established in consultation with international experts in conflict resolution and democratic advancement”.

The institute’s “Council of Experts” includes such Turkish liberal intellectuals and artists as Oral Çalışlar, Ufuk Uras, Kadir İnanır, Cengiz Çandar, and Mithat Sancar. DPI seems to be the new address of the leading figures of the “Not enough, but yes!” campaign. This campaign catalyzed the AKP-Gülenist network-liberal trio alliance’s win over a critical constitutional referendum held in September 2010.

As the referendum was held under the name of “democratization”, it further reinforced the alliance of the AKP government and the Gülenist forces particularly by means of some “judicial reforms” within the state apparatus. The liberal supporters of the “Not enough, but yes!” campaign became the megaphones of the referendum process.

DPI also appears to be the new center of the “Wise People Committee”, a group of pro-AKP celebrities, academics, journalists and intellectuals, that was formed with the call of Erdoğan’s government to guide the so-called “solution/peace process” between the AKP government and the Kurdish movement from late 2012 to 2014-15 when the negotiations between the parties eventually failed.

Kerim Yıldız, the Chief Executive Officer of DPI, talked about a meeting of the institute held in London in September 2019. “The previous members of the ‘Wise People’ Committee’, a senior governmental adviser, a politician, as well as a former ambassador attended the meeting,” Yıldız said.

Noting that they discussed “how lessons learned from past experiences can be applied when evaluating the current ‘parked’ process” in Turkey, Yıldız said the roundtable meeting in London was supported by the EU, the Irish, the Netherlands, and the Norwegian governments.

According to DPI, the institute also carried out a “comparative study visit”. This study visit “discussed for the first time the role of religious leaders in peace and reconciliation”.

Aşkın Asan, a politician from the ruling AKP, also participated in a meeting of the institute held last year in Oslo. A Turkish journalist reported at that time “Asan attended the meeting at the request of Erdoğan”.

DPI claims that it “seeks to promote peace and democracy-building through strengthened public dialogue and engagement”.