"AKP continues to play with fire in Syria": TKP on triple summit

The daily podcast of the Communist Party of Turkey,(TKP) released on Wednesday focuses on the Fifth Triple Summit of Iran, Russia, and Turkey on the war in Syria, underlining that peace is possible if the warmongers leave the Syrian peoples to determine their own destiny 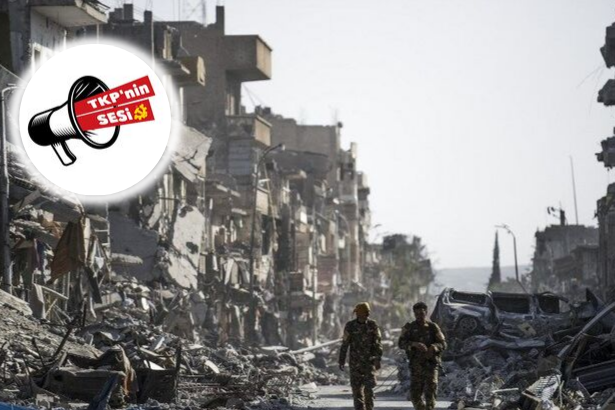 The latest release of the "Voice of TKP", the daily podcast of the Communist Party of Turkey (TKP), touched on the Fifth Triple Summit of Iran, Russia and Turkey held on Monday in Ankara, focusing on the war in Syria.

The joint press conference after the Summit in the presence of Iranian President Hassan Rouhani, Russian President Vladimir Putin and Turkish President Recep Tayyip Erdoğan reflected the fact that all three countries have different plans and interests in the region, Voice of TKP emphasized.

Erdoğan: If we do not come to an agreement with the US in two weeks, we will implement our own plan

"One of them claims that the Islamic State of Iraq and Syria (ISIS) is still a threat in the region, while the other ignores it. One of these countries is trying to sell S-400 missiles, and the other is seeking after undertaking agreement in Yemen," it is stated in Wednesday’s podcast of Voice of TKP.

Reminding that the war in Syria has been going on for nine years, Voice of TKP asks the question of "Who is responsible for this war?", and briefly recalls what happened in Syria to answer it:

"‘Imperialist intervention in Syria began in March 2011. The protests, which started with the demand for ‘freedom’ in those days, turned into inter-sectarian provocations in a short time. The country has been quickly dragged into a civil war."

"Nobody is concealing that what happened in Syria was a planned operation. This operation was a plan to divide Syria, and the main actor in this plan was unsurprisingly the United States. The U.S. has created an ‘opposition’ forming the jihadist gangs, funneling them millions of dollar, providing them with arms and weapons to organize conspiracies and terrorist actions [against the Syrian people and the government]…"

"The so-called peaceful protests begin in the region. Then people are killed in these protests. And the U.S. military comes and bombs them to save the people…Sounds familiar, isn’t it? They staged this imperialist intrigue in Syria, as in Afghanistan, Iraq, Libya, and many others…"

Stating that Turkey has been a party to this destruction in Syria, Voice of TKP notes that the ruling Justice and Development Party (AKP) pitched into this bloody intrigue in order to consolidate its own power and to open new markets to the capitalist class, particularly building contractors.

As Turkey’s foreign policy on Syria under the AKP, which Turkish President Recep Tayyip Erdoğan had been ‘‘vowed to pray in Damascus’’ in 2012, has turned into a total warmongering, the borders of the country were opened to jihadist armed gangs, it is also stated in the podcast released by Voice of TKP on Wednesday.

The podcast also reminds that Turkey provided guns, ammunition, and logistics to the Free Syrian Army (FSA), a jihadist armed group founded by the generals fleeing from the Syrian army, while luxury hotels in Turkey’s southern province of Antalya were arranged for the meetings held by jihadists and their members were freely treated in Turkish hospitals located near the Syrian border.

These jihadist gangs organized dozens of terrorist attacks not only in Syria but also in our country. The AKP’s policies in the war in Syria have claimed the lives of our citizens, it is also noted.

‘‘The AKP is now hoping for the continuation of the turmoil in Syria by trying to play a double game between Russia and the United States. The ‘buffer zones’ and military/’humanitarian’ corridors planned to be formed in Syria are in no way connected to the security of our country. The AKP uses the Turkish Armed Forces (TAF) as a bargaining chip in the conflict of interest between Russia and the United States. Moreover, this bargaining has the potential to incite new conflicts. In short, the AKP continues to play with fire in Syria.’’

TKP: PEACE IS POSSIBLE IN SYRIA AS LONG AS WARMONGERS LEAVE THE REGION

Underlining the clear stance of the TKP on the situation in Syria, the podcast released by Voice of TKP states that this war may come to an end as long as those who provoke the war leave the region and all imperialist forces withdraw from Syria.

"The independence and territorial integrity of the Syrian state must be recognized, and only the working peoples living in Syria must decide the fate of their country," Voice of TKP addresses in its podcast released on Wed.

"Peace is possible. As long as the leaders fed by the war, capitalists making a large profit from the war, and the social and political order that continues its existence with bloody wars are destroyed."

"For peace, we need a system which is slanted towards equality, freedom, and justice. TKP calls on our working people to support this solution in the region," Voice of TKP concluded.