80 percent of pensioners live below hunger threshold in Turkey

Turkey's All Retirees Union announced that 80 percent of retirees receive a retirement pension below the hunger threshold. 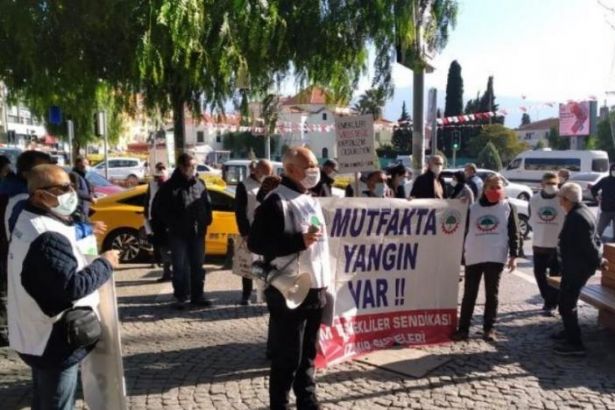 İzmir Bornova Branch of All Pensioners Union released a press statement regarding the budget draft. Branch President Mehmet Düşünceli said, “The draft budget was prepared and discussed hastily as if it was being left out of account and unnoticed. Our opinions were not consulted, the sectors we represent were ignored.”

Düşünceli said, “Our right to establish a union for pensioners, which is guaranteed by international agreements, is trying to be taken away from us through court decisions, the state tries to ignore the 25-year trade union past of retirees, instead of making the regulations in domestic law in accordance with international conventions, they are threatening to close down unions.

The number of retired, widows and orphans in our country is over thirteen million and the income of eighty percent of these people is below the hunger threshold. Widows and orphans receive a pension between 640 TL and 1350 TL, and only 20 percent of retirees receive a pay above the hunger threshold. Is it possible to live humanely with this salary? Is it possible to live in a safe residence with this money?

In the new budget law, is there any statement about solving these problems or any paragraph that says these people should be able to lead a dignified and humane life without relying on others? No not at all. This practice condemns the people to hunger. The 2021 budget means misery and poverty for retirees.

Unless retirees, workers, unemployed people, peasants, in short, laborers join forces and hold these robbers, thieves and bloodsuckers accountable for what they do; we will go on dying in disease, earthquake, war and hunger. When the working people become aware of their power, they will see that the paper palaces will be destroyed by a flick. Because we take our strength from our righteousness”;

The demands of the union are as follows: