11 delegates from the Young Communist League of Cuba met with the members of the Communist Youth of Turkey in Istanbul. The two youth organizations discussed during the meetings the situation of children and young people in Cuba and Turkey 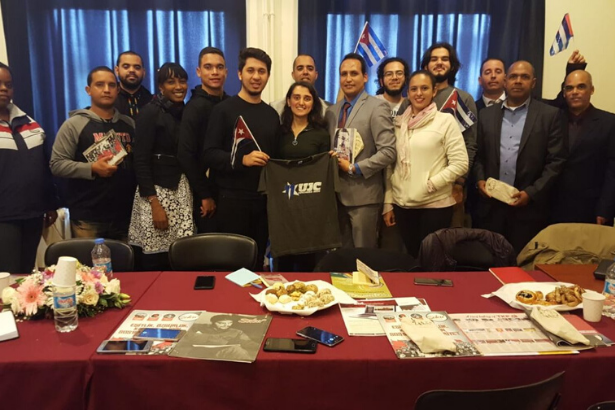 Young Communist League of Cuba (UJC) got together with members of the Communist Youth of Turkey (TKG) at Nâzım Hikmet Cultural Centre in Istanbul. In the meeting accompanied by Ankara Ambassador of the Republic of Cuba, Luis Alberto Amoros Nunez, and Consul Luis Javier Cabanas Alvarez, the two organizations discussed what to do for the young people in their countries.

Representing various regions of Cuba and multiple sectors including energy, biotechnology, and the arts, the UJC delegation led by Dr. Rogelio Garces Barban began the meeting by emphasizing that the youth organization UJC, as defined in the new constitution in Cuba, underlined the “pioneer” position in the construction of socialism.

The primary responsibility of the UJC for organizing socialist society in Cuba with OPJM, Jose Marti Pioneers Organization among children, and BTJ, Youth Technical Brigades among youth, was expressed as ensuring the ideological and political development of youth.

#SOMOS CONTINUIDAD: WE ARE CONTINUITY

Stating the all young people in their country have been carrying out a campaign to ensure that they adopt an independent national identity and socialism values, UJC representatives indicated that their campaigns, especially Somos Continuidad (We Are Continuity), were organized to plan a political development process that would extend from the youth to party membership.

The delegation of UJC, drawing the attention to the importance of keeping youth in socialism, underlined the need for a struggle of Cuba against imperialism and the transfer of historical consciousness to new generations.

After the presentation made by TKG in which the importance of internationalism was emphasized, the delegation of UJC addressed several questions to understand the youth struggle in Turkey. Moreover, TKG recounted the anti-imperialist struggle in the country and the solidarity actions for the countries facing various forms of imperialist intervention such as Cuba and Syria while telling about the close ties between imperialism and the capitalist class in Turkey.

While it was stated that the Communist Party of Turkey (TKP) would celebrate the hundredth anniversary next year, it was also mentioned that it had a political meaning rather than just a commemoration. While the UJC delegation was invited to the centennial events to be held next year, the Cuban delegation said that youth was one of the central themes of the congress at the seventh party congress held in Cuba three years ago.

The visit took place during a busy period in preparation for the 11th Congress of UJC in 2020 TKG has also been invited to. UJC stated that the representatives who will attend the congress at the municipal level have still to be determined.

While TKG has wished success for the congress being organized under the slogan “Tu Futuro, Hoy!” (Your Future, Today!), UJC said that they had been carefully following the TKG's activities, especially their work towards organizing and raising the banner of socialism and achieving success despite such difficulties in the country.