"Yes, they sold out everything. Even the rain!" 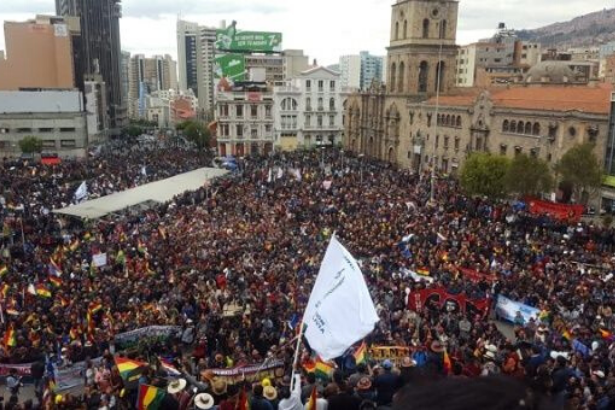 The Pinochet coup of 1973 in Chile was regarded as the first move of neoliberalism. “Our boys did it” and Friedman’s disciples set right about selling out whatever the public has and stepping over both rights and the bodies of the workers.

“Even the Rain” was one of the movies that told about Bolivia after years. Yes, they sold out everything! Even the rain! The process Marx called commodification has overcome the stalemate and smashed the walls. The commodification flood also drowned the “wall” whose anniversary was commemorated recently. Countries of socialism have also fallen into the hands of the same “boys”. It’s not even 20 years between the murdering of Allende and the dissolution of the Soviet Union. Both are parts of the same process.

History does not repeat itself or whatsoever. It sure has a direction but it is determined by struggles. The struggle has been done: The bloody commodities have flooded the place in Southern America, yet we kept seeking for the revolution in Turkey. Was it only us? European imperialists have put out all their efforts to restrain Spain, Portugal, or Greece. Let’s not forget about the tiny Cyprus or the schemes done to keep Palestine away from the left… If we had found what we sought for, the history would definitely have changed. Because our side was looking for a revolution, in Afghanistan, and in Angola and so on…

Neoliberalism won the victory and the wheels of exploitation which first was dragged into a deadlock by the strengthening workers’ movement and later started to crumble in face of the Russian revolution and the following instances were once more repaired. All was cut loose and the ruthless exploitation has returned.

There is no law like history repeats itself. Yet unless the working class intervenes and destroys this exploitation system, capitalism is dragged into crises in periods. It is a sort of repetition then! The victory of neoliberalism, taking into consideration the early 1990’s roughly, has not given a taste of golden age for even twenty years. 2008 is the year it crashed. The repetition of the crisis is capitalism’s destiny.

In the early 1970s a new model, a different type of capital accumulation regime has turned up. Fascist generals have not only intervened in the popular coalition in Chile but the stalemate of capitalism at the same time. Beating down socialism, independency, virtues of labor, equality they have set up a new market model.

Then what was expected to come instead of it when the market model has crashed down in 2008? An “alternative” to this market, “logically”.

The history does not have that logic either. Class struggles “make” history. The failure of the market was the result of capitalism that does not know anything else than repeating itself. The victory of the working class struggle against the capitalist class is another thing. That is the revolution that should be sought for with perseverance and due care.

Briefly, socialism was a gift that the socialist breakthroughs following the two world wars have dictated to the world. Capitalism ripped off socialism infiltrating into itself by force of arms and filled its place with commodities. As the market was crashing down a working class socialism was no more to dictate socialism again. The market died and the market resurrected!

Today, humanity is captive in the hands of the dead. We are in an era of madness where the progression of history is being restrained in the capitalist grip. The capital is telling all the world the alternative to the market is the market.

What could they be possibly up to by the Bolivia coup of 2019? In the face of the crisis of the system where they already have been selling even the rain, are they planning to sell the cloud of the rain? They have long been marketing the space. The year 1973 has placed fascism and capitalism into a new era. The 2019 fascism cannot promise for anything else than going around in circles. The world is already living in the post-1973 era. Turnaround to 1973? Are we returning to the era of coups? We have never gone past it so we can’t turn back! See, under the AKP rule, Turkey has been living through September 12 (1980) already. There is no better September 12.

It is not a turnaround but the collapse of the madness. Capitalism is the madness itself.

Yet, this scene is also an invitation for the working classes, peoples, and communists of the world. We have been invited to reach for the revolution this time which we once sought for but could not find and then were broken in search of it in the 1970s or ’80s. What we see in Bolivia, no heroism intended, is in fact not the victory of imperialists, exploiters, inhumane fascists but the invitation for the revolution which we cannot miss and be late for once again.