Working classes in between blocks of imperialist rivalry 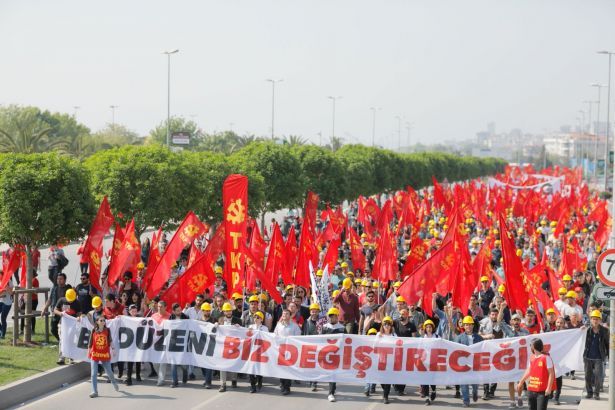 Everyone is aware of a new pursuit and intention of a design emerging in the politics of Turkey. Considered to be passive actors of the order, working classes are pushed into taking sides with the new scheme.

On one hand stands democracy, compromise and provision of the Constitution to increase the authority of the parliament, and national stance against the US is on the other.

Which one should we prefer?

Both sides have appealing aspects at first glance.

Yet, the power of the working classes derives from their organization, and their reason comes from seizing upon history with the true method. Let us very briefly try to comprehend this division for recent history.

Between the end of WWII and 1990 where USSR dissolved, the capitalist class of Turkey was quite clear. Due to its class features, being a second rate industrial country under unquestionable dominance of the US, it adopted a stance seconding imperialist system and against the socialist one.

Nevertheless, despite this clear stance, in a world where Soviets existed, elements like national independence, developmentalism, workers’ rights and organization, social statism were able to be partially maintained within Turkey’s capitalism.

After 1990, the balance in the world changed by leaps and bounds. Integration of the whole world under the leadership of US imperialism gained pace. There was no place in this world for independence, workers’ rights, organized labor, social state, justice protecting the public against the capital or enlightenment. All the acquisitions of the world with socialism in Turkey were to be taken back and the imperialist system was to work on as a whole like the wheels of a machine.

For this leveling job, the ruling AKP was designed. It has acted for mutual objectives of imperialism and the capitalist class ever since. It set off to wipe out the social state, enlightenment and any obstacles before the capital.

On the other hand, the imperialist system has not developed as smoothly as the US capital dreamed about. As the capital accumulation merged with strong state traditions in China and Russia, the imperialist rivalry began to shake and to determine the course of the world.

Turkish capital realized the US policies do not coincide with its interest and even began to endanger it. First outburst emerged within the armed forces corresponding to a bourgeois political faction. For instance, the navy was cooperating with Russia in the Black Sea. The unconditional dependence to the US in the imperialist rivalry was being subjected to questioning.

By the task it has assumed while handing over all prosperities of the country to the capital, AKP was to remove all resistance points. Trials of Ergenekon, Balyoz, etc. [large political trials in late 2000’s where a vast number of military personnel were purged and that later were “revealed” to be scam cases] were made through this purpose. Turkey was not preferred to improve a national weapons industry. Engineer “suicides” one after another in Aselsan [semi-state Turkish company specialized in war technologies] and purges in the arms industry should be interpreted in the same direction.

Apart from that, the task AKP accomplished, which is to be regarded as robbery of the working people, has manifested with a rapid and immense accumulation of capital. Turkey has obtained the whole slew of direct foreign investments. In fact, integration with the imperialist system was through, and a capitalist paradise was built where laborers cannot resist. Though it is unable to even produce its own steel or its own vaccine, Turkey was becoming a market and a region where foreign capital was involved in relations of production, while Turkish capital was massing gradually and starting to export capital abroad.

The equation has changed yet again. Especially following the 2008 crisis, Turkish capitalist class intended to intervene via its state apparatus in every region where it exports capital. On occasion it was by diplomatic means, sometimes was through veiled operations and sometimes was done via martial agents. Turkey endeavored to gain a relative independence gap against the US who do not correspond to its interest and pursue an expansionist policy. Military bases abroad, improvement of the national weapons industry, post-2011 tendencies of AKP, Gulenist insurgency [the US-based Islamist faction behind the unsuccessful coup attempt in 2016] and its purge should be interpreted in this context.

Recently, it was discussed in this column this process came to a deadlock. Turkish politics is currently being rebuilt to surpass this obstruct.

What does the political strategy shift in Turkey amount to?

Now we can take a look at how the working classes are to side.

First and foremost, working classes of Turkey cannot take sides with the US which conducted and is currently conducting unspeakable crimes against peoples of the world and which represents the most degenerate system throughout the world. Even in terms of making up with, this option is out of the equation for working classes anyhow.

And, what about the national stance against the US? The perpetuity question?

For one thing, the working classes of Turkey cannot act together with the capitalist class who robbed and is currently exploiting themselves. It is even not possible for them to accept the exploitation of working classes in other countries by Turkish capital and to regard it to be a real policy.

Expansionism, rivalry in this sense, sending of poor juvenile of the country abroad to death for the interests of the capital is categorically out of the laborers’ universe.

Besides, as we have remarked in this column repeatedly, the price of falling back upon another bloc of the imperialist world may not be discovered instantly today, but is to be revealed in the near future.

Bearing the sole principled and ethical stance, working classes of Turkey and their policy stand on this ground.

The only side to take for the working classes is their own.