Turkey's retailer giant Bimeks left hundreds of workers with unpaid wages and compensations after bankruptcy in 2018. The workers started to organize through the solidarity network initiated by TKP to fight for their rights 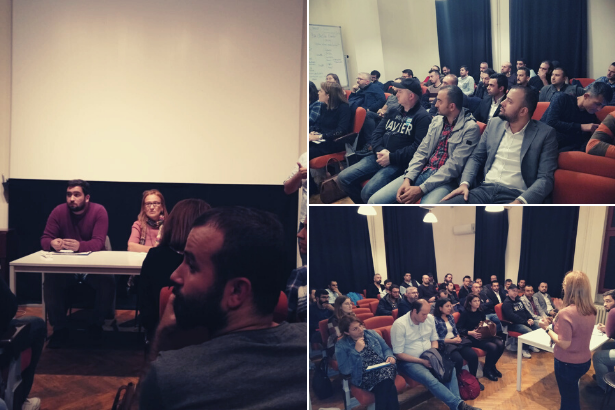 The first technology retailer giant in Turkey, Bimeks, went bankrupt in early 2018, leaving hundreds of workers with unpaid wages and compensations. The owners, on the other hand, profited not only from retailing but also from stock market speculation and trading through the company.

As reported by soL columnist Alpaslan Savaş, one of the two owners of the company, Vedat Akgiray, had transferred his shares to his brother Murat Akgiray and was appointed by the AKP government as the chairman of the Capital Markets Board of Turkey. Akgiray was announced his support for the ruling AKP in the 2015 elections.

After the owners decided to make Bimeks go public in 2011, the company announced high profit rates just before going public although it announced loss before. According to the figures reported by the press, Akgiray family earned 22 million Turkish liras from floating shares. As the value of the shares went down in the following five years, the family started to buy the shares through other companies they owned.

On the other hand, following the bankruptcy, Bimeks workers were left with unpaid wages and compensations, while the owners increased their wealth.

Until recently, Bimeks workers have tried to pursue their rights in various ways, mostly using individual methods and legal ways. They have now started to organize through the solidarity platform "We Breathe Down the Bosses' Neck" initiated by the Communist Party of Turkey (TKP).

WORKERS HELD MEETINGS IN BIG CITIES, DECIDED TO STRUGGLE TOGETHER

The Bimeks Committee of Istanbul, which consists of Bimeks employees who worked in various stores and warehouse centers in Istanbul, met last weekend. The committee clarified its plans on what to do to reach more Bimeks workers.

"We, as Bimeks workers, set off with the solidarity network to fight for rights seized. There are hundreds of Bimeks workers all over the country like us. The only way to get our rights is to come together and act together as Bimeks workers everywhere," the workers said in their statement issued after the meeting.

Following the meeting in Istanbul, Bimeks workers held their first meetings in Ankara and Bursa and decided to struggle together with the Bimeks committee established in Istanbul.