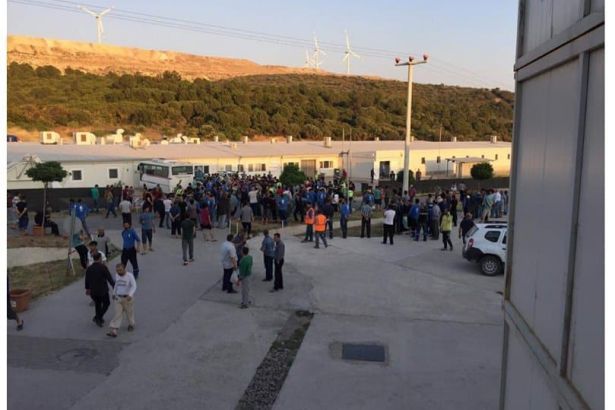 In İzmir province of Turkey, subcontracting workers at SOCAR investment Star refinery protested that the food given at their workplace is spoiled on June 5, local media reported. Workers said that they cannot eat the meal served since the chicken dinner smelt bad. Noting the previous cases of food poisoning, the workers said they want food worthy of humans.

The catering firm Akyıldız is known to be close to the AKP government, and that's why the firm is being backed by the refinery administration, workers note. Workers add that they will boycott the food served at the refinery if it is not improved.

The administration locked the doors of the cafeteria upon the protest of the workers and they halted food serving.

Star refinery started operating in İzmir Turkey following the privatisation of Turkey's first petrochemical plant PETKİM. PETKİM was privatised by the ruling AKP government in 2008 and 51% of its shares were transferred to SOCAR Turkey in 2011, while 39% of the shares were public securities. As a SOCAR investment, STAR refinery also acquired some landed property of PETKİM in 2011. Having signed the largest loan agreement with the longest term in the history of Turkish real sector, STAR refinery has become one of the largest oil and gas project finance operations in the Europe – Middle East – Africa region.