2,000 workers gathered in Turkey’s Sakarya on Dec. 24 to protest the privatization of the 1st Main Maintenance Center under the General Directorate of Military Facilities affiliated to the Ministry of National Defense 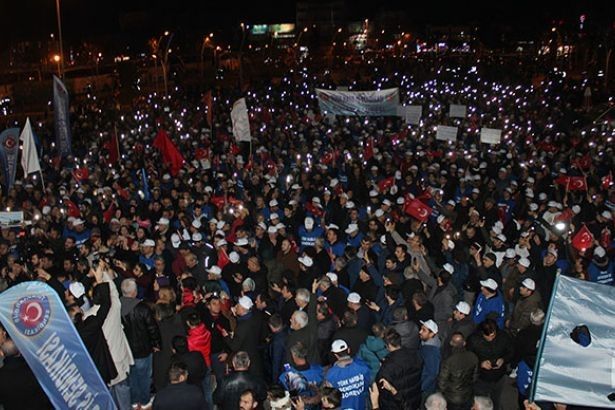 Workers working at the 1st Main Maintenance Center, a military factory located in Turkey’s northwestern province of Sakarya, started to protest after the Turkish government’s decision to privatize the factory operated under the Ministry of National Defense-controlled General Directorate of Military Facilities.

Around 2 thousand workers from different factories located in Istanbul, Sakarya, and Kocaeli, who are the members of the Union of Workers Employed in Defense, protested against the Turkish government’s privatization attempt on December 24 by shouting slogans, ‘‘Defense industry cannot be privatized!’’.

The military factory had been included in the scope of privatization with a presidential decree issued in the Official Gazette on December 21, 2018.

Following the decision’s publication in the Official Gazette, the workers at the factory and locals reacted against the government’s decision of privatization.

Reminding the fate of the previously privatized factories such as Turkish tobacco and alcoholic beverages company TEKEL and sugar factories, the citizens argued that the sale of a military factory is a move against the public interests.

ONLY ONE FIRM TO WIN THE PUBLIC TENDER

As OdaTV reports, the public tender of Turkey's first military tank factory, known as "tank tracks factory", can be won only by one company called BMC. BMC was also the company that won the tender for Altay tanks. The situation that there is only one firm to win the tender has been known for at least three months before the privatization decision, according to the source.

The CEO of BMC, Ethem Sancak, had been a member of AKP's central executive and decision board for a period. The pro-government employer Sancak expressed his loyalty to Erdoğan saying "I fell in love when I saw his honesty, bravery. I could sacrifice my mother, my father, my wife, my children for him."

Sancak had previously been given a large area and investment incentives for him to invest in the defense industry in Sakarya. However, in September 2018, BMC suddenly stopped its construction of the factory that would manufacture Altay tanks.

THE AKP AND ITS LOVE FOR PRIVATIZATION

Although the introduction of privatization along with neoliberal policies to Turkey began much earlier than the AKP government especially with the military coup in 1980, the ruling AKP seizing the political power in 2002 intensively accelerated this process by looting and making benefits of state enterprises available to both national and international capital, continuously seeking new privatization opportunities through anti-labor policies.

According to a report published by Turkey’s Directorate of Privatization Administration, Turkish government privatized 10 ports, 81 power plants, 40 facilities, 3,483 premises, 3 ships, 36 mine sites, and public shares of 94 companies between 2002-2017.

Many strategic factories for Turkish economy such as TEKEL, state-owned petroleum refinery TÜPRAŞ, and state-owned telecommunication company Türk Telekom were sold to both national and international capital during the AKP government, having negative impacts on the rights of working class and Turkish economy.