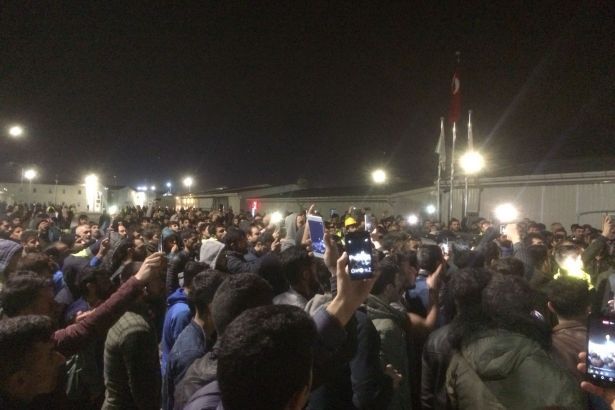 As the construction of İstanbul's third airport commences hastily, so do the poor working conditions and occupational murders rise the tension of the workers. On February 13, the workers protested the decision of the management to accommodate 6 people at a room for 4.

Around 30 thousand workers are employed at the construction site and the management is to employ extra workers to complete a part of the project to be visited by Turkish President Recep Tayyip Erdoğan on his birthday, February 26. However, there is not enough room to accommodate all the workers.

Around a 100 workers rallied to the camp management office at the construction site to voice their complaints. The workers said "we do not want to live like animals", receiving a threatening reply "you either live like animals or leave". The workers decided to block the main road of the camp in the following morning, February 14.

ALLEGATIONS ON THE MURDER OF 400 WORKERS AT THE  SITE

Veli Ağbaba, the vice chairman of the main opposition party CHP, submitted a parliamentary question regarding the allegations on the murder of 400 workers at the airport construction site.

Ağbaba questioned the exact number of workers died so far, the reasons of their death, the number of labour safety specialists employed at the site, and whether the allegations of bribery to the families of the dead workers reflect the truth.

Turkish government blocked the news by Mehmet Kızmaz published in Cumhuriyet daily, alleging that around 400 workers have been killed so far at the construction site due to the lack of labour safety and that the families of the dead workers have been silenced with 400 thousand Turkish Liras.

The parliamentary question submitted by Ağbaba is based on this news.

WORKERS GET THEIR DEMANDS

Following the rally of the workers to the camp management to raise their complaints regarding work and accommodation conditions, the workers announced later on February 13 that their demands are met.

The camp management declared that the problems of main courses, insects and overcrowding at the dormitories will be solved soon, adding that empty rooms will be located and newcomers will be transferred to these rooms.