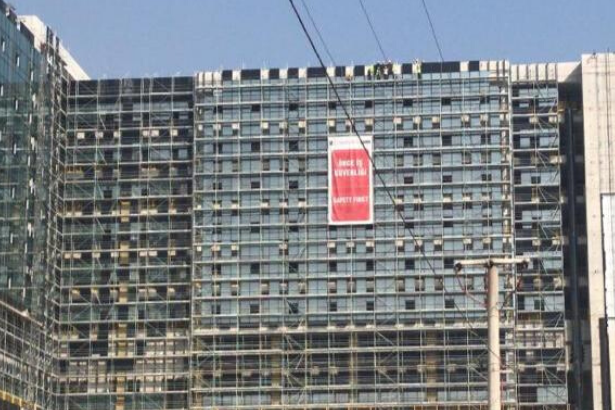 As reported by the solidarity network initiated by the Communist Party of Turkey (TKP), "We Breathe Down Bosses’ Neck", workers of the İzmir city hospital construction started protests because the employer was not paying to the workers. Workers on Friday began to dismantle the facade scaffolding on the roof of the main building. Company authorities negotiating with the workers agreed to pay their salaries.

Previously, workers in the same construction had launched a work stoppage because they could not get their wages from Alp Erdem, another subcontractor of Gama-Turkerler.

In the previous days, their work stoppage was supported by a statement of PE Izmir Healthcare Workers' Struggle and Solidarity network.

"We are the health workers who are going to start working in Bayraklı City Hospital when the construction is finished.

Workers of the construction of Izmir City Hospital stopped working because they were not paid. While the wages given to the workers are not even sufficient, the bosses try to pocket the wages with their utmost brazenness.

This cannot continue. We will come out of this hell together with struggle, solidarity," the healthcare workers had said.

It was also reported earlier that the toilets and the conditions of the places the workers eat were threatening their health.