Refinery workers took action against the boss's reduction of break times and moving of working hours to an earlier time. 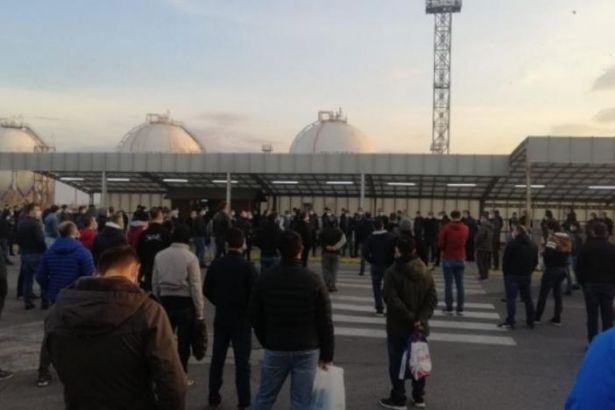 A letter was sent by the boss to Petrol-İş Union (petroleum workers' union) which stated that the shifts in TÜPRAŞ were told to be withdrawn to 7:00 am starting from 2nd of December. The workers' break periods are also shortened with the desired change reported in the letter.

TÜPRAŞ workers, who are organized by Petrol-İş, took action to deny these decisions taken without consulting them. Workers did not get on the services that arrived early on the second day of the action. On the other hand, it was learned that a report was taken about the workers who did not work in the early hours. Workers are forced to take the service at 05:30 a.m.

PROTESTS AT ALL FOUR REFINERIES

Simultaneous protests were held yesterday at all of the TÜPRAŞ branches by Petrol-İş Union.

In the statement made, it was said that the TÜPRAŞ worker was already in self-sacrificing work conditions with a 12-hour shift of a two-shift system. Which passed on the grounds of isolation during the epidemic, but the employer dictated a change for the resting periods in the shift and maintenance service, which was objected to by the employees

The statement said “Tüpraş employer does their best to break the morale and motivation of the workers and to break the peace of work in Tüpraş. Moreover, these changes are justified by occupational health and safety, reduction of health risks, and for the benefit of employees. We oppose these changes for the same reasons…”

Turkey Petroleum Refineries Inc. (TÜPRAŞ) was established as a joint company with the merger of 4 oil refineries, and in 2006 it was privatized and transferred to Koç Holding, the largest industrial conglomerate in Turkey.