Burger King workers and the Women’s Solidarity Committee, founded with the call of Communist Party of Turkey, protested sexual harassment cases at a branch of Burger King in İstanbul’s Beşiktaş district. 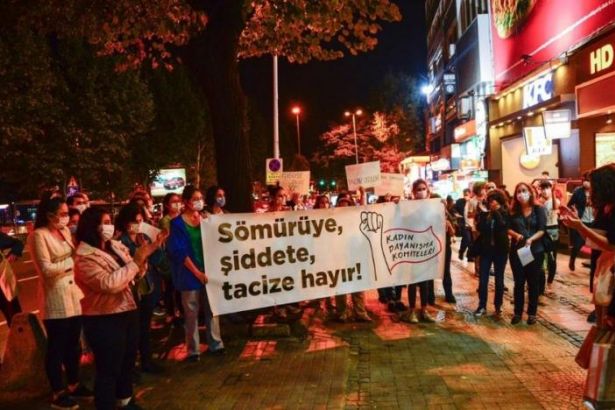 Female Burger King workers in İstanbul’s Beşiktaş district filed a criminal complaint at a courthouse on October 17 following the sexual harassment they experienced at the restaurant. Lawyer Nilda Baltalı from the Women’s Solidarity Committees accompanied the workers during their legal procedures.

The Burger King workers and the members of the Women’s Solidarity Committee from a district house of the Communist Party of Turkey (TKP) in Beşiktaş’s Cihannüma neighborhood later gathered in front of the Burger King branch to release a press statement and protest the restaurant.

We do not bow down to harassment and labor exploitation at workplaces.

Female laborers working in the Barbaros Boulevard branch of Burger King were forced to leave their jobs because they sought their rights against wage violations and inhumane working conditions they experienced last week, and demanded an end to sexual harassment of their managers in their workplaces.

We raise our voice against the harassment cases and the covering up of these cases at Burger King, as the women who are forced to do the same job for lower wages, dismissed because of pregnancy, not allowed to use breast-feeding leave or forced to work part-time for this reason, whose contracts are not renewed on the pretext of the economic crisis, who are subjected to harassment and pressure everywhere, whose nursery services are closed at workplaces, who are trying to live amidst high cost of living with low wages.

Because we know that today's social order sees women as second class to exploit us more and to usurp our rights more and more. The current social order leads to sexual harassment.

We are knitting solidarity. We will not let the harassers in our workplaces.

Today, we went to the courthouse with our female friends who were subjected to exploitation and harassment at Burger King and submitted our complaint petition. As Women's Solidarity Committees, we declare here that we will follow hard on this issue.

Cihannüma Women's Solidarity Committee stands by the Burger King workers and all the women workers who do not bow down."

Lawyer Nilda Baltalı stated that there was a harassment scandal at Burger King, adding that women workers were subjected to sexual harassment by a superior worker at the restaurant.

Baltalı said, "We have filed a criminal complaint today. This perverted mentality could not have done the same mistake to the same workers if they were men or bosses. Burger King mistakenly believes that women workers are weak and lonely. We know that organized women workers are not helpless. As the Women's Solidarity Committees established at the call of TKP),we will follow this process."

Burger King workers set up a solidarity network under the roof of “We Breath Down the Bosses’ Necks” (PE) about a week ago due to the abuses, harassment, and mobbing they experienced, and they did a twitter action on October 13.

Women workers, who stated that the harassment in the workplace was covered by their managers, also participated in the establishment of the Cihannüma Women's Solidarity Committees.