Confederation of Progressive Trade Unions (DİSK) issued a report on women’s labour in Turkey, which shows that 3 quarters of women work unpaid 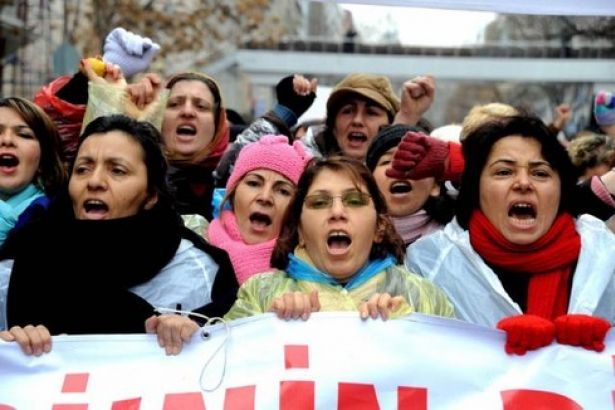 Confederation of Progressive Trade Unions (DİSK) issued a report on women’s labour in Turkey, which shows that 3 quarters of women work unpaid. The report suggests that the rate of unemployment among women is increasing. According to the Turkish Statistical Institute’s (TÜİK) report, the narrow-defined rate of women’s unemployment has increased by 3 points since the previous November, reaching 16%, whereas men’s unemployment rate is now 10.2%, increasing by 0.8 points.

The report also includes TÜİK’s statistics that show how much time women and men spend on domestic chores and family: women for 4 hours and 17 minutes, and men for 51 minutes. What this means is that 3 women in 4 are forced to work unpaid in Turkey.

Gender is, again, an important factor in unionisation, though the rates are drastically low for both sexes: 7.6% for women, and 13% for men.

In the ranking of inequality of wages, Turkey’s place is 98 among 145 countries. Besides, women are shown to work for 23 minutes more a day than men, and they are not paid for the extra labour.

AN INSIGHT FROM THE INSIDE

Fatma Akın left the first one because she did not have insurance, the second because the factory was moved, and the third due to the “terrible conditions”. They were not paid in an orderly manner, and their insurance payments were not made properly. She worked there without insurance for 6 months.

To the question of how a worker can be happy, she answers: “To be paid what I deserve.” Akın explains that no one can live in İstanbul with an income less than 3.000 lira (800$), and that both she and her husband’s wages make up to 3.000 lira. Considering the educational expenditures of their two children, even the small amounts of payments apart from the monthly plan damage the family budget.

Akın states that, in the textile sector, it is really hard to find a workplace where oppression and insults do not exist. This causes the workers to think that their conditions are very well even though they are ill-paid.

Fatma Akın thinks that a worker has to be organised in order to get what she deserves. As to the workers being organised, Akın’s mind is pretty clear: “Provided that there are classes, you, as the boss, are the enemy of my class. If you are having your holiday in luxury, while paying me 1.500 lira (400$), you are my enemy. What should we do, then? Unite, of course. However, even though I am a qualified worker, it would be really hard for me to find a job if I got fired. How could we live, then, only with my husband’s wage? This sort of a concern prevents people from acting freely. Not only in textile, but in every sector. Everyone has similar concerns, but it should not stop me from living as I wish. It should not stop anyone.”