Why did the president of the European Commission kiss the unionist's bald head? 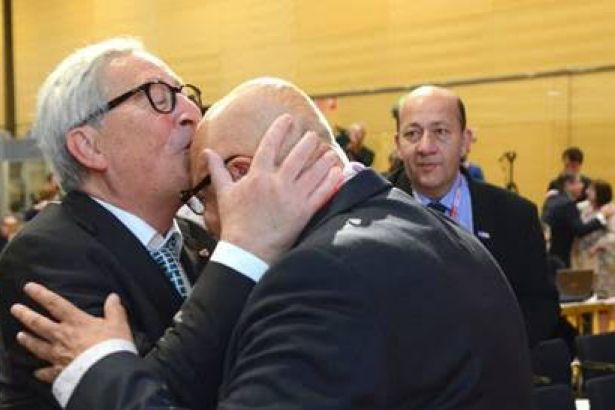 A photo remained from the Congress of the Confederation of European Trade Unions (ETUC), which was gathered in Vienna last week. On the first day of the Congress, the President of the European Commission, Jean Claude Junker, kissed the head of the ETUC Secretary-General Rudy De Leeuw. The Christian Democratic leader from Luxemburg, Junker, should have considered such a response suitable after the Secretary-General of the ETUC personally thanked for "rescuing social Europe".

PAME evaluated the Congress as a show, noting that “the ETUC, which is funded about 75% by the EU's mechanisms in order to intervene in Europe's trade union movement and promote EU’s anti-workers’ policies, organized a great pre-election show for the European Social Democracy and the EU, which it named "Congress". SoL columnist Alpaslan Savaş wrote on this show in his column on May 30.

Why did the president of the European Commission kiss the unionist's bald head?

The Social Democrats responded to the Christian Democrats' bald-kissing show by participating in the Congress full-team. Europe's social democrat bloc, particularly the president of the host country Austria, was at the ETUC congress. They proved to be "democrats" who make their son's bald head kissed by a Christian democrat.

The All Workers' Militant Front (PAME) of Greece summed up the meeting as follows: "What we can say with certainty that no one saw at the ETUC Congress, was… workers".

Absolutely right. It is understood that the trade union congress was transformed into an arena where the capitalist class appeared with their political representatives in Europe just before the European Parliament elections held a week later. There are capitalists, statesmen, bureaucrats at the Congress. There are also unionists from other countries who do not miss the opportunity of touristic congress with the host trade unionist who made his bald head kissed.

This ”bald kissing" snapshot is not a coincidence. This issue extends to the first imperialist war when the 2nd International made the European working classes follow the bourgeoisie of their own country. In the summer of 1914, European social democracy became the Trojan horse of the capital within the working classes. This was facilitated by the weight they had in unions. The International Federation of Trade Unions (IFTU), established a year before the war, had the leading role in the integration of the working class into war. The headquarters of the union was in Berlin and it was led by right-wing social democratic trade unionist Karl Legien.

Fortunately, the Bolsheviks in Russia removed the darkness with the working class, it became clear that the workers did not have to live with remnant and the idea that another world would be possible for humanity has become real.

But if there are classes, the fight between them continues uninterrupted. This time, the capitalist class gave the fight to prevent the extension of the great victory of the working class in Russia in 1917 to Europe.

Social democracy and social democratic trade unionists came on the stage again. It was a year after the October revolution. Hundreds of thousands of workers were on strike in Germany. On the streets of Berlin, workers were fighting behind the barricades against the bourgeois government of the Kaiser. Workers' and soldiers' soviets were established in various parts of the country. The German revolution was at the door and it was the beginning of a European revolution. Two days after the Kaiser escaped to the Netherlands, the social democrats call for a "labor-capital conference", taking the first step for rescuing the bourgeoisie. It was not a very innocent move to gather a labor-capital conference in Berlin whose streets were filled with barricades. 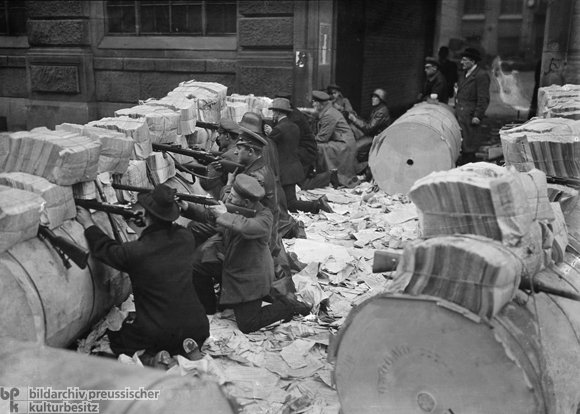 At the conference, the capitalist class was represented by Hugo Dieter Stinnes, the boss of the Arado company, which produced German warplanes that would later become Hitler's most important war machine. Leuksin, the social democratic leader of the IFTU, who had fulfilled his mission for the bourgeoisie in the first war, was the representative of the working class.

We do not know whether Legien was bald and Stinnes kissed his bald at this conference, but we know that the capitalist class immediately accepted the expansion of union contracts, the eight-hour workday, establishment of workplace committees.

This result was written in history as the Stinnes-Legien Agreement. Considering that the exchange was a world revolution, it is obvious that it was a profitable trade for the bosses. 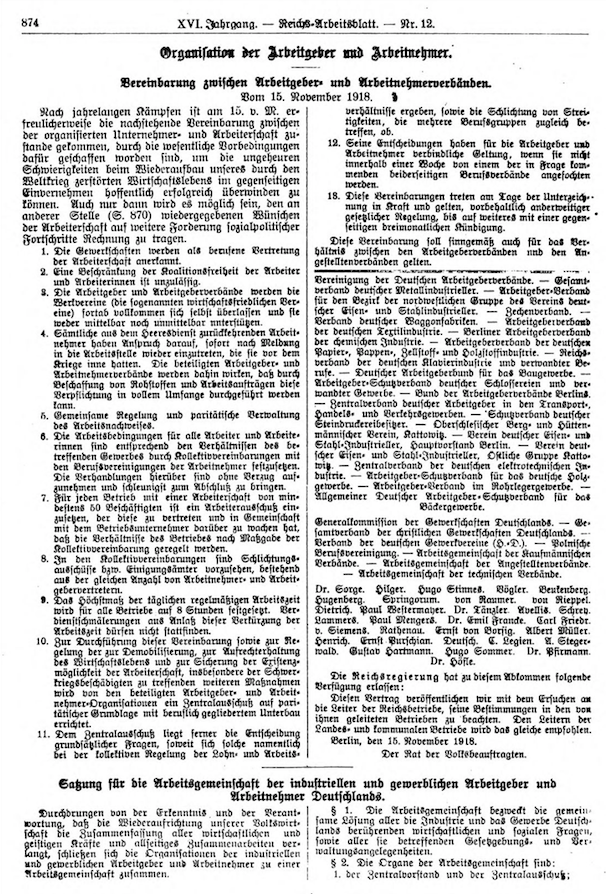 This conference had a big role in the oppression of the German revolution. A few weeks later, the provisional government was formed. The first Congress of the Workers 'and Soldiers' Soviets, of which three-quarters of the delegates were composed of representatives of social democratic parties, trade unions and co-operatives, gathered at the beginning of December and decided to support the provisional government, which denied the soviet government. Thus, the operation of the social democracy to hand over the working class to the bourgeoisie through the European trade union movement was completed once again.

A few months after the German revolution was suppressed, the IFTU was re-established. This time, the presidency went to the British and the vice-presidency went to the Americans with a decisive anti-communist union leader Gompers. Legien, who fulfilled his duties in Berlin, had not been able to fulfill any other duties. He died in 1920.

We said that the issue extends to the betrayal of the working class by the Second International. The European trade union centers continue to be the subject of the intervention of the capitalist class. Sometimes as a set against the spread of workers' power to Europe, sometimes as a cold war instrument...

The ETUC remains to be the representative of this line in Europe. The mission of the ETUC continued after the dissolution of the Soviet Union and socialist countries in Europe. What kind of a mission could have a trade union while 85 percent of its current budget is funded by the EU Commission?

The ETUC enables EU policies to be transported to neighboring countries. I do not think that you will want to know today's trade unionists of Eastern European countries who are grimacing when they hear words like resistance and strikes. Why would you say "strike", when you can do "social dialogue"? Why would you say ”getting organized", while you could convince the boss to that a union would benefit him, too? The magic word is "social dialogue" and it is the expression of full submission to the capitalist class.

The function of the ETUC should never be underestimated in the EU balloon inflated in the early 2000s in Turkey. Hundreds of thousands of euros worth EU funds were placed in the coffers of the trade unions in Turkey. Joint trainings were organized, projects were carried out. Hak-İş, Türk-İş, DİSK, KESK... There is no one among them that stayed out of this process. The ETUC has done good work for the EU bourgeoisie.

If you remove the communists from the European trade union movement, there will remain wreckage of tremendous treachery. The Red International of Labor Unions (Profintern) founded after the October Revolution, the World Trade Unions Federation (WFTU) founded at the end of the Second War demonstrated that a trade union which is independent of capital and capitalist states and does not separate between the economic and political interests of the working class is possible. They succeeded in moving this understanding to some important trade union centers of the capitalist countries.

Trade union understanding independent of capital and the state may have lost power in the international arena today. However, it is not possible for ETUC or similar unions to eliminate the impact of this understanding on the trade union movement and the working class. This is an organizational problem and the current situation is temporary.