Why communist candidates in local elections? 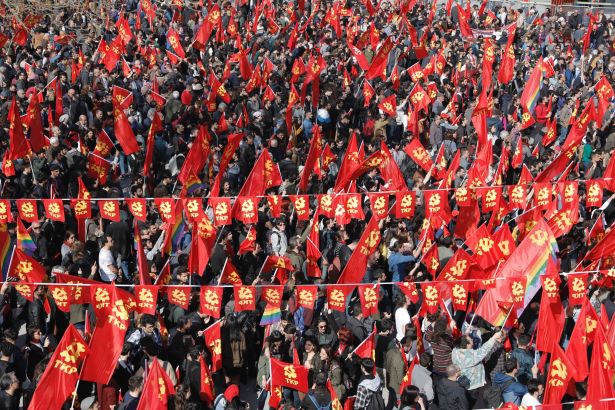 For the time towards the end of feudalism, the historians give a standard figure for the urban-rural populations in almost all countries: 90% of the population lives in rural areas and 10% lives in cities.

This percentage was normal for feudalism where the main source of wealth was land and exploitation was based on peasants' labor.

Cities have grown as money and trade dissolve feudalism. From the beginning of capitalism, it has actually been the capital that governed the cities.

While the industry had been developing in cities, the change in the form of property in rural areas led to the move of large peasant masses in cities. The disintegration of the rural has intensified by the mechanisms such as the transfer of feudal property into the hands of capitalist farmers, mechanization in agriculture, the imperialist takeover of agriculture in the dependent countries.

In Turkey, the distribution of the population in the 1960s, 30 percent in rural and 70 percent in urban, has almost completely reversed today.

The families in agricultural production were dragged to the cities where they could sell their labor, without any planning or state support for them. The state allowed them to occupy land on the edge of cities and live in poverty because the manufacturing capital needed masses of workers.

Because the capitalist class investing in the industry were not thinking about the country's development with social equality, but about their own interests. Capital had no concern other than reaching the cheapest labor force and the markets from the easiest way possible.

On the other hand, with the structural crisis of capitalism, the rate of profits in industrial production for the last 40 years has started to decrease. The city itself has become the primary means of compensating for these declining profits.

The working masses who were dragged from the villages to the cities were also dragged into a consumption culture that shaped the structure of the city. The cities have been restructured for the masses to consume like crazy when there is excessive production on the one hand, and the working class is pushed into insecurity in the service sector, on the other. A new co-operation and cycle have been defined between financial capital, municipalities, trade and manufacturing capital.

The cities have been re-planned to fit as many cars as possible and to make them go without stopping, if possible. Subways, bridges, highways, one-way roads... The street where we used to play football when we were children has turned into a river full of alligators and we have turned into herds of animals trying to cross the street, escaping from falling prey to these alligators. The trees in front of the apartments were cut off to fit more cars; we cannot even walk on the pedestrian road because they were also turned into parking lots.

There was no need for shanty houses anymore because every square meter of the city was perceived as a land for the construction sector to build skyscrapers.

At the end of this ugly operation, which the capital carried out through the municipalities and was called urban transformation, no green space was left to be used by the working people, but they did not forget to add small green-looking areas among the residences.

Only one place was left for the working people to go with their children on the weekends, no matter if they have any money or not: Shopping malls. There are people who lounge around among hundreds of shops. The system presented this commodity fetishism as an opportunity for people to see other people's faces because it already destroyed the social environment and imprisoned the working class in their homes.

You can understand why there is such a great competition between mayoral candidates from different parties despite all of them have a similar political strategy.

Municipalities have now become the main corners for making profits and rent-seeking activities.

Now we can talk about what the communist candidates mean for local elections or why people should vote for them.

First of all, to vote for a communist candidate means supporting socialism against this terrible consequences of capitalism. It is therefore important to count these votes.

Also, a communist mayor in the city or in a district leads to a truly positive change in the working people's life. The election of communists to some municipalities did not mean socialism in any part of the world, but in many places like Greece, Portugal, India, and Brazil it led to really positive experiences.

A third reason, that might be the most important one, should be emphasized:

These votes express an uprising against the fact that from the very beginning of capitalism, we have been dragged into the cities, that we have been forced to live in this irrational production and consumption process and that we are left alone among the millions of workers in the city.

It means being organized and turning into the subject of the history from being oppressed depending on the will of capital.

That is exactly we can easily say: “Vote for the communists!”