Who supported and nurtured Islamic State?

As the world press presents the assassination of Islamic State leader Abu Bakr al-Baghdadi as a ‘victory’, soL news once again reminds the truth that is tried to be glossed over: How did IS become so powerful and who supported this gang of jihadist killers? 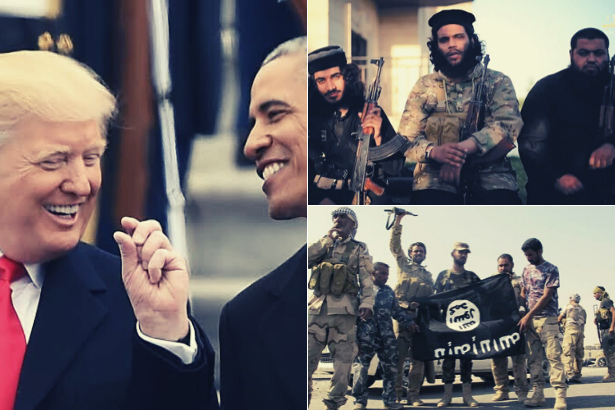 While people in different countries across the world welcome the death of the leader of the jihadist murderers, those responsible for the emergence and expansion of the Islamic State by empowering and supporting it for their national interests managed to become the leaders of this wave of positivism.

Islamic State (IS) was one of the most important apparatus of the imperialist-backed jihadist aggression on Syria during the war in the Middle East started in 2011.

Those who welcomed the jihadists’ advance in Syria against the Syrian army in order for "the end of Assad government" had sneakingly hailed the massacres targeting the Syrian people, Hollywood-like execution video footages shot by jihadists and the massacres carried out by IS.

IS grew and took control of a significant part of Syrian territories. This growth, which means many new opportunities for the United States, has been brought under control over the years and its field of influence has been restricted, at least ‘for now’.

On this exact period, the death of the leader Abu Bakr al-Baghdadi was declared to the world by the U.S. President Donald Trump as "a victory of the US".

While the U.S. once again tries to tell the world a romance for ‘heroism’ about the death of a murderer created by the American government itself, soL news reminds the truth that is tried to be glossed over. Imperialist forces were all there while IS was growing up in the Middle East.

A GREAT OPPORTUNITY FOR THE U.S

Hacked e-mails of John Podesta, the presidential campaign chief of Hillary Clinton, who was the then-presidential candidate of the Democrats in the U.S., had revealed significant information on this issue.

An e-mail sent by Podesta to Clinton on August 17, 2014, had given crucial information about the relations between Western intelligence services, the U.S. intelligence agency, and sources in the Middle East with the jihadist terror organizations fighting against the Syrian government.

Podesta’s related email begins with the following sentence: "With all of its tragic aspects, the advance of ISIL through Iraq gives the U.S. Government an opportunity to change the way it deals with the chaotic security situation in North Africa and the Middle East."

In the same document, it was said that the Syrian Kurds could defeat Islamic State if Kurdish Peshmerga fighters were provided with necessary masterminds and air support.

The document also showed that the U.S. officials suggest that new equipment should be provided to "the moderates" against IS in Syria, but at the same time these groups should increase their operations against the Syrian government.

Moreover, Podesta’s email had clearly stated that Qatar and Saudi Arabia provided financial and logistical support to IS.

WEAPONS SENT FROM LIBYA TO SYRIA

The U.S., which declared its victory through occupation and jihadist gangs in Libya, had transferred weapons and military equipment provided for the Libyan jihadists to Syria.

A report on the U.S. military intelligence, the Defense Intelligence Agency (DIA), uncovering that DIA had enough information about the threat of the Islamic State in 2012 had been widely discussed at that time.

The report dated 5th August 2012 stated that the deterioration in the security conditions created an "ideal atmosphere" for the rise of the Iraqi Al-Qaeda, the predecessor of IS, while it is noted that the jihadist organization would return to its former territory, Mosul and Ramadi, to unite with other terrorist groups in Syria for the declaration of an Islamic state.

Another report revealed that the U.S. intelligence service was fully aware of the weapons and military equipment sent from Libya’s Benghazi to Syrian jihadists.

According to the classified document prepared on Oct. 5, 2012, ships loaded with weapons were sent from Benghazi to the ports of Baniyas and Burj-Islam in Syria.

Detailed documentation of military equipment and weapons in the ships was also included in the report: Sniper rifles, RPGs, 125 and 155-mm Howitzers…

Ships loaded with weapons and military equipment had been sent from Turkey, the report also indicated. The U.S. Ambassador, who was killed in Sep. 2012 in Benghazi, had met a Turkish diplomat just before his assassination. The Turkish diplomat was alleged to coordinate the transfer of arms from Libya to Syrian territories.

TO WHOM DID THE ISLAMIC STATE SELL OIL?

Although the imperialists and their collaborators try to keep IS away from the oil-wells in these days, the jihadist terror organization earned a great income from the oil fields and oil-wells for a long time in Iraq and Syria. Furthermore, many European countries were purchasing oil from IS during the rising period of the organization. According to Russian sources, Turkey was also one of the countries purchasing oil from IS.

An investigative journalist Nafeez Ahmed wrote in his report in the Middle East Eye in 2015 that the U.S. and the United Kingdom, the two most powerful elements of the coalition fighting against IS, were covertly financing the terrorist organization in Syria.

Claiming that the U.S. and the UK shut their eyes to the oil smuggling of IS, Ahmed noted that the British government had strong relations with the corporations that IS sold oil.

SAUDI SUPPORT TO IS TO FIGHT AGAINST THE SHI’A

One of the countries that gave the biggest support to IS was undoubtedly the U.S. regional ally Saudi Arabia.

Following the fall of Iraq’s Mosul into the hands of IS terrorists in 2014, the then Saudi Foreign Minister Prince Saud al-Faisal told John Kerry, the then U.S. Secretary of State: "Daesh [an Arabic acronym for ISIS] is our [Sunni] response to your support for the Da’wa."

Furthermore, an intelligence report released in 2012 suggested that the Western countries, Gulf countries, and Turkey supported the Islamist ‘opposition’ in Syria in order to overthrow the Assad government. According to the report, these Islamist organizations aimed to establish an Islamic emirate in the region.

‘ISLAMIC STATE IS THE NEW SEPTEMBER 11’

Emphasizing that the Islamic State is the new September 11, Kemal Okuyan, the General Secretary of the Communist Party of Turkey (TKP) wrote in soL news in 2014: "ISIS has not been out of control. Now we can clearly say that ISIS ─ or Islamic State with its new name ─ is making a good job in the interests of the U.S. government."

"What more can Uncle Sam expect from an armed formation created and nurtured by himself?" Okuyan had also asked.

"The Arab world no longer finds this landscape odd: The U.S.-trained Peshmergas and IS murderers would attack each other by using American weapons, and American bombs dropped from aircrafts would hit one of these parties," Okuyan continued in his article.

Stating that IS has created the energy needed for the revision of the great transformation plan which started with "the Arab Spring" hitting the wall in Syria, Okuyan noted: "The atrocities committed are so appalling that no one is willing to articulate the explicit role of the U.S. in the emergence and growth of these murderers."

"IS is an implicit U.S. operation. It is a new and better-designed attack of September 11. It is the outcome of ‘the Constructive Chaos’ strategy," Kemal Okuyan had concluded in 2014.