Who is more pro-NATO? Erdoğan or Macron? 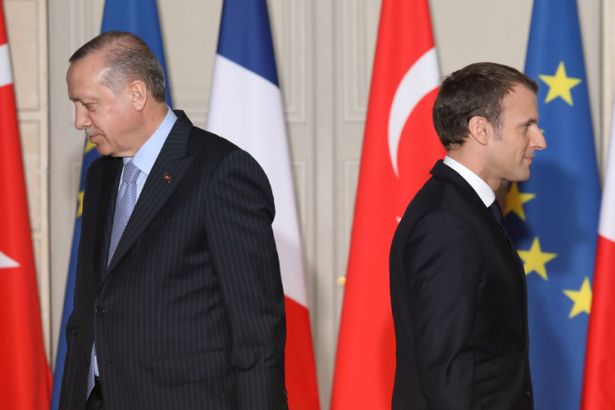 Uproar in the neighborhood! It was clear that things would come to this point after the dissolution of the "enemy" Soviet Union, which kept the imperialist world more or less in harmony after the Second World War. As the competition escalated, the hegemony of the US has weakened and the weight of Russia and China has increased, the situation has got more complicated.

French President Macron's statement that “Russia is not our enemy" should be taken into consideration. In fact, Macron points out the anti-communist character of NATO and that it was established to destroy socialism. Therefore, the Russian Federation, which emerged after the collapse of socialism, cannot be regarded as an enemy by NATO just because it has been founded on a significant part of the legacy of the Soviet Union. That's what he wanted to say.

According to Macron, the NATO alliance should focus on the fight against terrorism and provide the basis for improved cooperation between the allies. In saying this, it is clear that Macron implies that the United States acts in violation of the spirit of alliance with economic sanctions and regulations.

But the oddness starts at this point. The French President stating Russia is not a menace, still insists that Turkey’s purchase of S-400 from Russia is unacceptable.

Turkey, which is claimed to have drifted apart from NATO sidling with Russia recently, is accusing Macron of being defeatist. It is so much that Erdoğan, Çavuşoğlu and together with them the media implies “We won’t let NATO go out like that only for Macron”. A NATO analysis gets published in [Turkey’s state-run] Anadolu Agency as the summit is held. The title is “Does NATO Die Away When Macron Wishes?”. Still, the article written by Mehmet A. Kancı carries a very fundamental inconsistency.

In some parts of the article, the Russo-phobia of the west is made fun of. Please, read the statements below carefully:

“On one hand we have the terror menace which Turkey is actually and concretely exposed to, on the other hand, is the Russian invasion move in Europe that it fantasized to occur through the passing of middle European plains but that has never happened for almost 75 years. It sure doesn’t take to be either a diplomat or a military expert in order to comprehend which one of these has a higher priority. Turkey is charged as guilty whenever it diplomatically replies to intentional negligence maintained insistently in face of terror attacks it has been exposed to for years, as it was the case in the purchasing of S-400 air defense systems. Who pioneers for this blaming campaign is Emmanuel Macron, the President of France.”

So, what he says is that the Russian invasion in Europe is a fantasy!

Thus, what is told in the article written to defend the foreign policy of the Turkish government is that there is no Russian threat but a terrorist threat.

However, this is exactly what Macron has been saying!

Yet, in the following parts of the article, the “Russian menace” which was made fun of suddenly turns real:

“If the elemental components of NATO, the US being in the first place, and the vast majority of the 29 member states are sincere in the issue of Russian menace, first they will have to give allied Turkey’s concerns the priority,” Kancı writes.

The columnist has no guilt. What is in the center of Turkish foreign policy is to sell its friendship with Russia as expensively as it can. Therefore it implies there is not a “Russian menace” at the same time it says if NATO is to sustain its unity against Russia, then it needs to rate a better price for Turkey.

Thus, Erdoğan who some praised for “Standing up to the US” tries to bring Macron stating “Russia is not a menace” into line saying “Is NATO your business?” in NATO summit and, doing so he is tending to cooperate with Trump.

Yes, there is an uproar in the neighborhood.

NATO was founded to fight communism. As communism temporarily withdrew from the platform of states, NATO started to expand through the east with a strategy confirmed by all member states. This expansion has turned up in Russian borders now. After that point, the competition and contradiction among NATO countries are getting more apparent. A resistance came into existence as the US tried to utilize the organization for its own interests. Sometimes Germany and sometimes France have chanced to stand up to the management of NATO by the US as it likes.

This is what is happening now. The AKP government has entered the struggle in NATO head-on and tried to take a stance neutralizing France, unlike the ones expecting it to turn its back on NATO. Erdoğan’s stance in the London summit is the implication “We are the owner of the place.”

All in all, they still have the ability to hold NATO together for now.

Still, it should be seen that, not as brain death or so, but as a world system, the imperialism is dying and rotting. Either humanity is to hit the deadly blow to this horrible social system running out of steam, or the imperialism will perish humanity together with itself.

Bilateral, trilateral, quadrilateral and any sort of lateral talks were held in the summit. It does not matter which combination you look for. Analyze each all you like. Do you really think that anything could be derived from any leaders in the NATO summit for the sake of humanity? Or do you really feel safe in a world where they rule?

One needles another, another straddles disrespectfully, one says “empty talking” to one another… These details are pointless. There is no place for them or suchlike in humanity’s future. In other words, as long as they exist, humanity does not have a future!