What politics, what sort of politics? 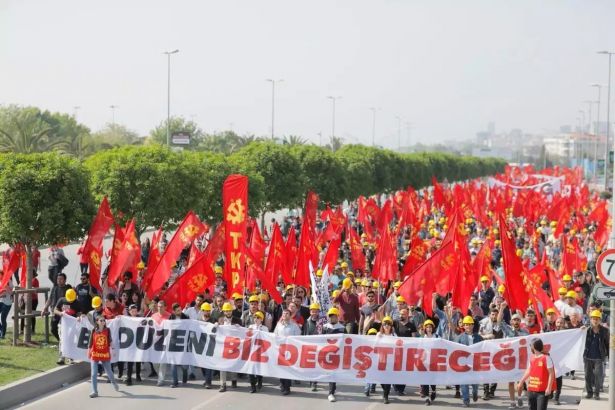 It is true we are passing through a very miserable era. The institution of politics has become quite whimsical alike.

Marx had once put down its “normal” form. The determination that each class "represents its interest as the common interest of all the members of society” could be adapted to political movements, parties, politicians. No one can explicitly say “I exist to exploit others” or submit its true ontology before bare eyes. It tries to enforce its presence to be “the best” among all other options, or else “the least adverse”.

In extraordinary state forms or regimes, this tendency would be left aside and the mechanism would uncover from the veils it is hidden behind. But if you turn deviant atrocities, anarchy, and unlawfulness into common incidents, you sure write stories of insanity and live in it!

Now we have to correct this final proposition as well. People, working people, cannot and will not live in stories of insanity!

More politicians of the world today in increasing numbers don’t even bother nowadays to veil their lies, aestheticize their views full of crap, legitimize their cruelty. Look at Trump, or at Brazil and then pass over to India. If the lunatic gone is yearned rather than the lunatic today in Europe, if it is the point that Berlusconi and Sarkozy are pined for today, it is truly clear that we are going through a miserable age.

Not intended to wail. Responding is intended to what sort of a struggle is to be put up in these circumstances.

Turkey does not fall behind this profile of the world, but rather it has beaten some of the world records in a certain set of branches.

Nowadays it is claimed, some women are killed because they are granted women’s rights. The solution is taking them back.

Children could be raped. A one-year-old infant can be married to and what is to be done to her is up to the husband’s discretion. If you interfere with his mercy, then he can’t tolerate it and eventually score some kills.

A 16-year-old kid could be sent out to delivery on a motorcycle, under heavy rain. He dies. It is not even told that this the bitter price required for the improving industry of service. It is only said, “They have friends in high places”!

For massing troops in a neighboring country or a farther one, you don’t have to convince the “public opinion” that you are the carrying force of the civilization. “I just did it!” has become a fit logic in itself.

Our boys use the “checkpoints” they established under exchange of signatures in order to purge the gangs, only for feeding them. And when the Syrian Army intervenes in, they prostrate before Moscow and whine, “Where are you off to?” as they make fresh new armament bargains.

The USA had convinced the world that in order to conclude the world war it had to use the atomic bomb. Now the ex-vice president of ours, Davutoğlu, is implying that we have created terror in order to fight against it. And this becomes one of our typical insanity stories.

They could not stop there. How could we presume that the form and the tone of the ruling policy would not spread over all of the system including the opposition dynamics?

The ones who announce they will burn down all forests of Turkey and who boast of being the starters of all fires themselves because the Kurdish rights were violated are first-hand part of the world belonging to Trump, Erdoğan, Bolsonaro, Modi… [1]

Two weeks ago, during the funeral of Cüneyt Cebenoyan [recently deceased leftist writer whose sister was killed in a PKK attack], they told “he is such a right-minded person that he even could embrace the murderers of his sister if required.” I was not there, just happened to see the news.

Yesterday, an MP to [pro-Kurdish] HDP was telling on a TV channel that by the dismissal of mayors all the world of politics apart from HDP was being tested. But it turns out, the night before the coup against the three municipalities, a pro-HDP “political scientist” was telling on another channel that the government must go for a new peace process. As he held the stakes high he was saying “never without democracy”.  Never, he says, and the previous “process” had made progress parallel to democracy after all, he concludes!

What politics, what sort of politics?

Now, we no longer should tolerate the saying, politics contains getting your hands dirty by necessity.

We should not be afraid of our cuffs stained of mud, they say. The politics is “real”, they say. It is not how you handle this business by seeking for a sterile ground, they say…

No, never! Not being contaminated with this dirty pit, purging it if any contagion exists is the principle of working class policies and is its integral part. It should have been all along. But it is obligatory now. One who struggles against this dirt is to have a stainless flag.

Our policy is to speak straight out. It is to call the murderer a murderer, the arsonist an arsonist. It is to call anyone who does not have a perspective to overcome capitalism a bourgeois party. It is not to be contaminated with lies and fraud. We are to know that our policy has separate rules. We are to know that no one among the bourgeoisie front will be convinced to our policy. And we are not to worry about being alone. Because we maintain our faith that humanity will not fit in this nightmare. And even we begin to see the red dawn within as the insanity stories mount up. When we win, we will bury this system down with all its dirt in it.

[1] The columnist refers to the declaration made by some Kurdish groups allegedly aligned with PKK who assumed countless forest fires occurred this summer in Turkey one by one last week as a response to dismissal of elected mayors.