Idlib, which has become one of the hardest knots in the war on Syria, is once again at the top of the agenda after the hot conflict. soL news compiled the recent developments in Syria and the route of Turkey's ruling AKP in its intervention in the country. 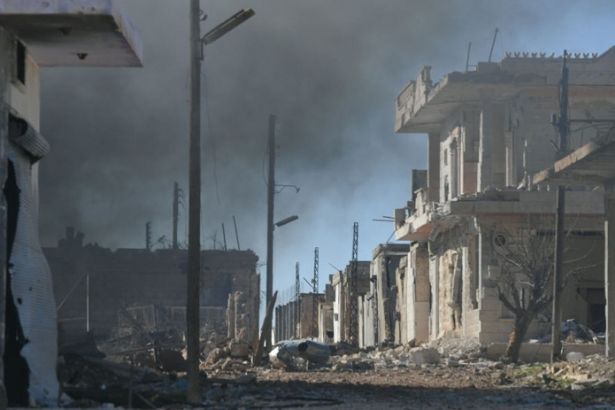 As stated in June 2017 by Brett McGurk, the Special Envoy of the USA to Fight Against IS, Idlib, has been the largest safe zone that Al Qaeda has acquired since September 11. The Syrian army's long-lasting operations at regular intervals for controlling the M4 (Latakia-Aleppo) and M5 (Aleppo-Damascus) highways, which are critical for the country's economic independence, continues.

The US and the European Union's (EU) sanction pressure on Syria has led to tragic consequences in areas such as Latakia, Tartus, and especially Aleppo recently. The sanctions that the Trump administration extended with the Ceaser Act in December and the congestion in the country's main transport arteries have left many Syrians deprived of their basic needs. The widespread use of Turkish lira in Northern Syria is among the reasons that increase the severity of this crisis.

In addition to all these, bomb attacks targeting oil refineries in Tartus and Humus in recent weeks are among other activities that serve the economic blockade, the country's facing.

These activities in the current picture cause much more damage to Syria than any attack targeting the army.

At this point, the control of M4 and M5 highways are vital for Syria.

The operation launched by the Syrian army against the Maarrat el-Numan district in the south of Idlib with the support of the Russian Air Force has been successfully completed, and progress was accompanied by an advance in southwest Aleppo. According to the London-based Syrian Human Rights Observatory, the number of regions seized last week was 47.

The cease of rocket attacks from Southwestern Aleppo targeting the center of Aleppo, and opening of highways was among the obligations of Turkey according to Astana and Sochi agreements. The Syrian side had reduced the momentum of its military activities in the last two years due to these treaties.

On Sunday, artillery shooting was carried out by the Syrian army near the town of Serakib to the elements of the Turkish Armed Forces (TAF) that were transferred to Idlib, and the Turkish Ministry of National Defense (MND) announced that 5 soldiers and 3 civilians were killed. The Ministry of Defense of Russia later denied MND's allegations that there were airstrikes targeting the Syrian army in Idlib. Russia claimed their side was not informed about the arrival of Turkish soldiers to the area, and that is why the Turkish soldiers were targeted by Syrian armed forces.

On the other hand, Serakib, the region where TAF elements were targeted, is critical in terms of being located at the junction of M4 and M5 highways.

CAN THE 'MODERATES' BE DISSOCIATED FROM JIHADISTS?

Operations in southwestern Aleppo can end with the absolute tranquility reached in the region and the clashes in Idlib may end when the transportation lines open again after years of blockage. The matter of dissociating the moderates from the jihadists does not seem possible, given the fact that the province is under the control of the Hayat Tahrir al-Sham (HTS), which is linked to the al-Qaeda group since the first quarter of 2017.

Today's operational zones are currently controlled by HTS components. HTS is in Turkey's "terror list" and the elements of this group frequently suffer police operations along the Turkish border.

Following the dynamism in Idlib, US Special Envoy in Syria James Jeffrey made a supporting and backing statement on HTŞ which is on his country's terrorism list. The statement is as follows:

“There are groups in Idlib that are accepted as terrorist organizations by the US and the United Nations. We have led operations against these groups before, for example, the operation where we caught the leader of ISIS, Bagdadi. There are much larger groups, like Nusra, like HTS. These are considered as extensions of al-Qaeda, terrorist organizations, but they are primarily focused on fighting the Assad regime. We have not yet accepted their assertions, but they claim they are patriotic opposition fighters, not terrorists. We haven't seen them posing an international threat for a while.”

Stating that they are supporting Turkey's 'efforts in Idlib', Jeffrey at the same time said they will respond if they witness the use of chemical weapons in the region. Yesterday, the Russian Ministry of Defense announced that the chief organizer of the chemical attack provocation that took place in Han Sheikh in April 2017, causing the US to hit the Sharatrat airbase near Humus with Tomahawk missiles, is preparing for a new provocation in Maarat el-Artik in the southeast of Idlib.

Hours before Jeffrey's announcement, President Erdogan, referring to Geneva, argued that the Astana platform is coming to an end.

These statements gave way to comments that the US is ready to sacrifice its major force in Syria, the Syrian Democratic Forces (SDG). Moreover, Idlib also stands out as an important front against Syria's focus on US-controlled eastern oil fields. Advances in Idlib were made possible by the fact that Syria dominated the East Guta region of Damascus and Dera in the south of the country.

In addition to all this, in Libya, Ankara continues its support to the Tripoli-based National Consensus Government (UMH) through military investments. According to various news, Bayraktar Unmanned Aerial Vehicles (UAV) produced by the Turkish Baykar Makina were said to be used frequently in operations against the Khafter commanded armed forces.

The Libyan National Army under the command of the Caliph Khafter claims that thousands of militants were sent from Syria to Libya in the past few months.

These militants are drafted and dispatched mostly from Afrin and Idlib.

According to Turkey-backed Mutas Brigade Political Bureau Chief Muhammad Sicari, the recent tensions in Idlib and south Aleppo stems from the stagnant negotiations between Turkey and Russia and from the conflicts in Libya.

Sicari, who stated his opinions to Syria Direct News, said: "Russia has combined the Idlib file with the Libya file and is using it to exert pressure on Ankara."

Sicari described the recent tension by saying that Moscow was trying to strengthen its hand against Ankara in ceasefire negotiations in Libya. He further noted that "Turkey will not abandon her obligations to the Syrian people. The USA says the last word, and we're doing our best. ”

There's no need to remind the fact that, this statement, which seems to be the immutable fact by many in the first decade of the 21st century, is being confronted with great suspicion in the Middle East for a long time.

These could also be the "last words" of imperialism supported jihadists.