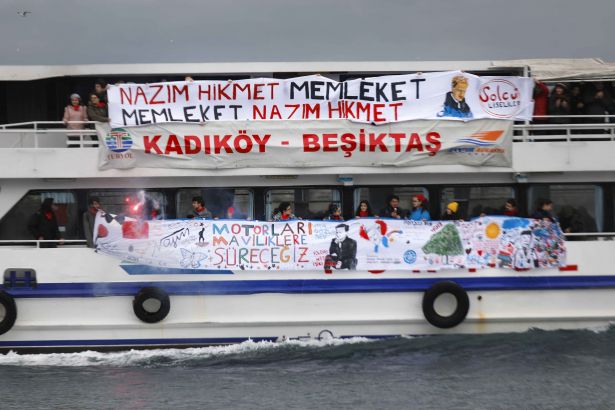 Every year, the week between 13th and 19th January is celebrated as the birthday of the great Communist poet Nâzım Hikmet in Turkey's high schools and universities by TKG. Leftist Highschool Students and TKG members launch the campaign in hundreds of high schools across the country. Several activities such as conferences to discuss the struggle that he led, passing his books and poems from hand to hand, holding musical and drama events telling the life and the views of Nâzım are organized to find the guiding spirit for the youngsters.

Meanwhile, the monthly magazine, "Solcu" (Leftist), will reach out for the high school students across the country during the month of January with the same title and theme. High school students will come together and read Solcu, with the title “To Become Nâzım Hikmet" to know the great poet and his struggle.

Also this year the birthday of Nâzım Hikmet will be celebrated with dozens of activities. At the end of the same week, on January 18th and 19th, the meetings and events across the country in which the communist poet will be commemorated will be held. The statement issued by TKG and Leftist Highschool students called on the youngsters to participate in those events and “share the hope of humanity” along with Nâzım. The statement is as follows:

We're going through the dark days. The sovereignty of the evils and evilness still continues.

And it is standing before us more and more aggressive every day, every second with a thousand different faces and masks...

Who also sells our land, our country, imprisoning us to live without a future.

Anywhere the evilness lingers they are there: bosses, imperialists, bloodsuckers. And their gunmen, namely the reactionaries, fascists, compradors.

And the millions whose hopes they have exploited...

"Hope is the in the humankind"

Says the communist poet Nazim Hikmet, hope is inside us!

Even in the course of the darkest period of the humankind, in prison, during exile...

Would a communist who fights for the salvation of humanity without getting tired or exhausted run out of hope?

We are high school students, university students and young people who welcome each new year with Nâzım Hikmet.

We are expanding Nâzım's struggle at every new age. Every year we carry the fight to high schools and universities with Nâzım.

We will salute the communist poet Nâzım Hikmet on his 118th age with his poems and fight.

We will salute, in order to build a world that knows no war and exploitation.

We will salute, in order to change this century.

This year, again, we declare the week from January 13th and 19th The Week of Nâzım Hikmet.

We will carry the poems of Nâzım into the classes and high schools. We will decorate the schoolboards with Nâzım.

We will come together across the country and discuss the struggle of Nâzım.

We will introduce Nâzım to the high school students, undergraduates, laborers in the city centers.

We call on our friends, fellows from high schools and universities to liven and glorify the fight of Nâzım on The Week of Nazım wherever we are stepping on.