"We will not settle with reactionism, we will fight against it"

"We won’t settle with reactionism, we’ll fight against it", the Communist Party of Turkey said in its statement on the 26th anniversary of the Sivas massacre 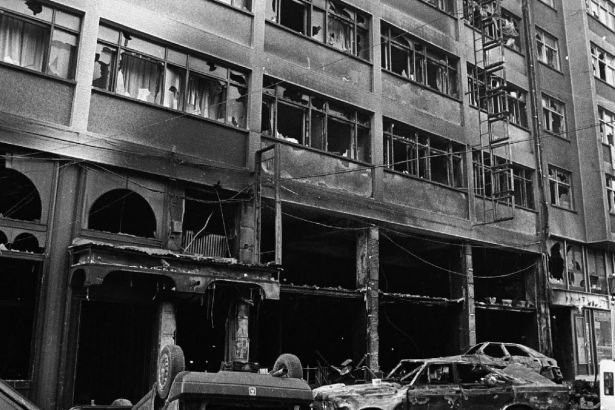 Communist Party of Turkey (TKP) has made a statement regarding the 26th anniversary of the Sivas massacre of July 2, 1993, in Turkey’s Central Anatolian province of Sivas.

Underlining that the perpetrators, abettors, and supporters of the Sivas massacre are presented as the wise men of today’s political scene, the statement noted: "Reconciliation with reactionism is tried to be promoted as an indispensable part of political achievement by the bourgeois politics."

Saying that the Sivas massacre was the credentials and action of the reactionary movement that [a wide range of oppositional blocks using a ‘normalization’ discourse] desires to reconcile with it today, TKP highlighted in its statement: "We won’t settle with reactionism, we’ll fight against it!"

"26 years have passed since we lost 33 intellectuals in Sivas. The burden and sorrow of the massacre still remain as a deep wound in our minds and hearts", the statement said.

As the statement released by Turkey’s communists noted that the Sivas massacre was a provocation encouraging the Islamic reactionism and attempting to suppress the progressive and working people of our country, TKP describes the massacre as a state operation incited, encouraged, and watched by the bourgeois order without doing anything while the massacre took place.

"At the current stage in Turkish politics in 2019, the whole of the bourgeois political order has been based its political strategy on the use of religious discourses as well. All kinds of relations with Islamic reactionism, religious sects and cults are considered positive in politics," it is also underlined.

"Reconciliation with reactionism is tried to be promoted as an indispensable part of political achievement. Yet, the Sivas massacre was the credentials and action of the reactionary movement which is desired to be settled with today."

"We will not settle with the Sivas Massacre, we’ll bring those responsible for it to book! We won’t settle with reactionism, we’ll fight against it!", the statement released by TKP concluded.

On July 2, 1993, a cultural event organized by Pir Sultan Abdal Cultural Association (PSAKD) was about to be held with mass Alevi population together with the participation of several left-wing authors, poets, and bards in Sivas, a province of Turkey in Central Anatolia. Several organized reactionary people had gathered in Sivas before the event, distributing leaflets targeting Aziz Nesin, a famous left-wing short story writer and one of the participants of the event for translating Salman Rushdie’s The Satanic Verses into Turkish.

The reactionary mob, around 5 thousand people in total, gathered and set fire Madımak Hotel where the participants of the event were staying, chanting slogans like "We want sharia",  "Army of Muhammed is the fear of the seculars", and "Sivas will be the grave of Aziz Nesin". As people were being burnt alive, the security forces did nothing to fend off the attackers. Although Aziz Nesin, one of the brightest revolutionary intellectuals of Turkey, was rescued from the burning hotel, 33 people were burnt alive on that day.

The Madımak case was abated for timeout and the counselors of the attackers became deputies of the ruling Justice and Development Party (AKP), while it revealed that one of the judges hearing the case was also the former lawyer of one of the suspects of the massacre.