'We will be present at the European elections to fight against the EU, the Euro and NATO’: Partito Comunista

Marco Rizzo, the Secretary of the Communist Party, Italy (Partito Comunista), comments on the elections for the European Parliament 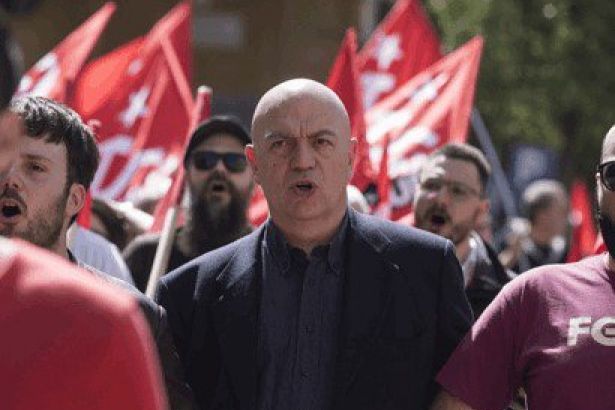 One of the political parties that will participate in the European Parliament elections on 26 May 2019 in Italy is the Communist Party (Partito Comunista), led by Secretary-General Marco Rizzo.

The party, which received over one hundred thousand votes in the parliamentary elections last year, held a large number of public meetings in recent weeks. In a press statement about their participation in the elections, the Communist Party said it was an important task to change the society, adding that the main reason for its participation in the European Parliament elections was not to get votes but to create consciousness by overcoming the media barrier during the elections.

Partito Comunista, for which the polls show a 1.2-1.7% of votes, is gaining interest among university students and young working people.

We share the interview with Marco Rizzo, which was published in Affari Italiani, a digital daily newspaper based in Milan, and in the International Communist Press (ICP) for the readers of soL news.

The Communist Party will be participating in the European Parliament elections, is that right?

Yes, we can say that a specter is haunting Europe. We will be present at the European Elections, with our lists in all the constituencies, to intensify the struggle against the European Union, the Euro and NATO. Some of these points that the Communists have always supported were even supported by the Five Star Movement for stealing votes from the left and today now that they are in the Government, all these points have been completely abandoned. We think that communists should and must be the real alternative against the fake conflict between a left that betrayed workers and the right that is in growth.

In one of your statements, it was declared that the Party will be in all the constituencies without collecting signatures, but you have no parliamentary groups in the Chamber or the Senate. Could you explain that exoneration?

The electoral law is completely clear. The lists that introduces a composite symbol which includes a party that has at least one elected member of the European Parliament are not obliged to collect signatures. The country where parliamentarians must be elected is not specified in the electoral law. Five years ago on this assumption, the lists of Greens were accepted. We are members of a European political group, the European Communist Initiative, and we would like to thank our comrades from the KKE who allowed us to insert their symbol on the ballot paper. It was a great display of internationalism.

The Communist Party has always had a strong anti-European position, isn't it a contradiction to participate in European elections?

We will put forth our position, without playing on words and opportunism. We do not believe that the European Union and European institutions can be changed from inside. This is a position that clearly differentiates us from the pro-European left. We will utilize these elections and the spaces that will be given to us to advance our slogans to denounce the nature of the European Union, which is key to the interests of finance and crushes the workers and peoples of Europe. We will do this together with the other communist parties of Europe with whom we have signed a common declaration that clearly states that a Europe of workers and peoples is not possible without abolishing the European Union and the Euro.

In the elections, a strong advance of the League Party is expected, are you worried? Why not form an alliance with the rest of the left?

The rise of the right in this country worries us a lot, but the main fault is of a left that has not done its duty. If workers today see Salvini as a solution perhaps it is because the center-left governments have passed laws attacking the rights of workers and the popular classes. Joining those who caused all this cannot be the solution. Changing the party secretary is not enough to change the nature of the Democratic Party. And this is also valid for a radical left that creates new lists, gets a new name and logo every election. As a communist, I think that only the reconstruction of a strong and coherent communist party can be the antidote to the advance of the right. We can be the alternative.