'We Weighed Anchor for Socialism!': Communist Youth of Turkey

The Communist Youth of Turkey released a statement on the 101st anniversary of May 19, 1919, the beginning of Turkey's War of Independence. May 19 is also celebrated as Youth Day in Turkey. 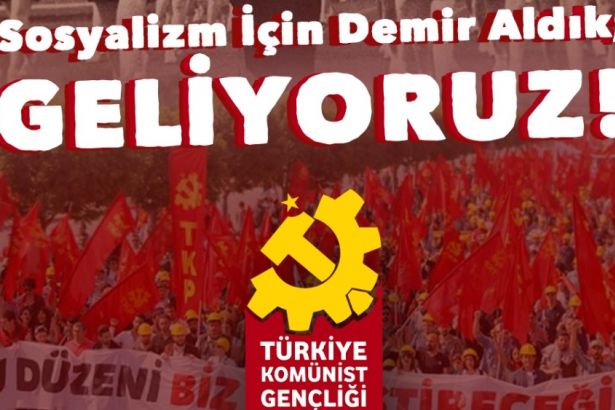 The Communist Youth of Turkey (TKG) released a statement on the occasion of May 19, Youth Day, reminding that it is determined to end this social order, bankrupted not only in Turkey but in the whole world. The full statement is as follows:

May 19 is a symbol. This day symbolizes the starting of the anti-imperialist independence war, which took a few years and the effect of which will last much longer.

Since it is a new start, it is associated with youth and considered as the dawn of Anatolia’s throwing the shackles of a sultanate that lasted for centuries.

Youth, surely, is the beginning and hope. It is the one which will run right in the front as history goes forward. Yet, we have to ask which one of these notions, May 19 evokes to us after 101 years?

Let’s remember the picture taken exactly 1 year ago in Samsun. The counter-revolutionaries that demolished the republic building a “high-rise palace” on it, fascists which their history is soaked in blood, even the Islamic fundamentalists who are as bad as Ottomans, and the largest “republican opposition party” in the country, held hands and posed for the 100th year of the republic.

This is precisely the pose of May 19 in bourgeois politics; being arm in arm with everyone, not containing a single principle, and it is a day which is to be transformed only into nostalgia.

Let’s say it clearly: Turkey is very far from being a livable country for youngsters, today. Concern for the future, education full of nonsense, the young women that their lives turned into a nightmare by the hands of Islamic fundamentalism… The ones who stand arm in arm, are the ones who prepare this portrait with cooperation.

The gravity of this portrait has become crystal clear in the last 2 months.

However, both the way of life that our country deserves and the May 19th can only be reclaimed by standing on one thick line: Revolutionism.

Anyone who reaches out for reconciliation with this decay has become a part of it.

Youth, on the other hand, will bring themselves into existence with the revolution against decay, make sense of with revolution, will see the light and hope in the revolution.

Communist Youth of Turkey is determined to end this social order, bankrupted not only in Turkey but in the whole world.