"The way we were"

SoL columnist and TKP Party Central Council Member writes on "the way" the humanity is walking on now as the society gives signs of "cracking its shells" after 99 years, referring to the anniversary of the foundation of the Communist Party of Turkey (TKP) 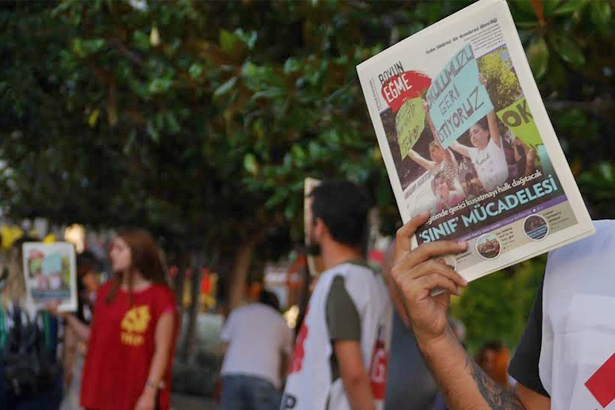 The title is the name of an award-winning movie. Barbara Streisand, who starred as one of the two old lovers with Robert Redford in Pollack's film, continues to distribute leaflets on the street in the years to come. Katie, by her name in the movie, would not change her way in the last scene.

The film was good and greeted resistance to time. Each long path has a meaning of resistance for those who continue to advance. But that implies aging, or resisting aging, which means the same. This is a bit of bitterness…

Today, "the way we were”, no matter how far from the past and no matter how it reflects the dignified or bitter existence of those who insist on walking on it, does not resemble what we will talk about. Having a long history does not guarantee a long future. You may have insisted on standing on it; but who knows, maybe it's the end of the road! Of course, if there is exploitation and if there is humanity, even if the old one is closed, a new one is opened. If not today, it may be tomorrow, next year, maybe much later. But certainly. What we are talking about is the way we are.

Today, in September 2019 in Turkey, after ninety-nine years, we should and can feel good. Not because there is a long history behind us, but because the way in front of us is open.

We don't know if the leaflet in the last scene of the movie will make it to the target. The resistance lasted until then, what about when we left the film theatre? Will Katie go out for distributing leaflets the next day? Or the next year? Will she be replaced by others when she reaches the end of her life? Is the beauty of handing out leaflets a final or a new beginning?

The way we are on in Turkey is clear. There were moments when our path was enlightened, even shining. It can be asked how right and wrong the past is. The more important question is how open the future is. What distinguishes us is not how we continue to "distribute leaflets" since the past, but how we see the future.

After 99 years, we are in a place where reactionism, corruption, ugliness, pain are at their peak. You can still continue. With honor or bitterness.

But more importantly, after 99 years, the accumulation of the country does not suffocate at the bottom of the deterioration, giving signs of cracking its shell. You can leap forward with strength. With confidence and assertion.

Davut got stuck in the elevator at the age of 14 in Denizli. Do you see death in the eyes of him or the self-confidence of a worker? Do you see any darkness in the smile of Burak, the young motorcycle courier killed on the road while trying to carry food? No reactionism can mute the anger of the young men attending Burak's funeral.

I give the examples of our losses so that the power represented by the living humanity is clearly visible.

Look at the high schools beginning their semester with struggles. You will see that the trap set to fill the religious schools did not work. See the teachers meeting in workshops against exploitation. Do you see the return of the working people, who are tried to be muted by poverty, as intellectuals determined to seek their right and to change their lives? The age of drug-using has decreased to 12 years and look at those who start thinking about how to set up a fight against addiction in neighborhoods.

There was an earthquake Tuesday morning in İstanbul; it is not enough to remember that the gathering areas in the city have been destroyed. Look at those who try to get organized to prepare for earthquakes. Obviously they're going to reach out under the debris and take out the “humanity"! The contract begins for the metalworkers. Do you see helpless people or people who will fight against the hell capitalism creates when you look at them?

The courier who was killed because he had to deliver the order in seven minutes. A teacher who hasn't been paid in two months. And others. Millions...

At the point of 2019, bourgeois politics and institutions cannot see these millions and cannot take them in. They could not stop themselves from building shopping malls on safe assembly areas, recommending submission to those fighting against death, and putting bright-minded children in religious schools.

And we are at a time when all this means being communist. We are experiencing the equalization of the words human and communist. 99 years later, we see that it is not just possible but likely for our way to open a bright future.

This is what makes our way beautiful.