Warmongering: Is it real or bluff? 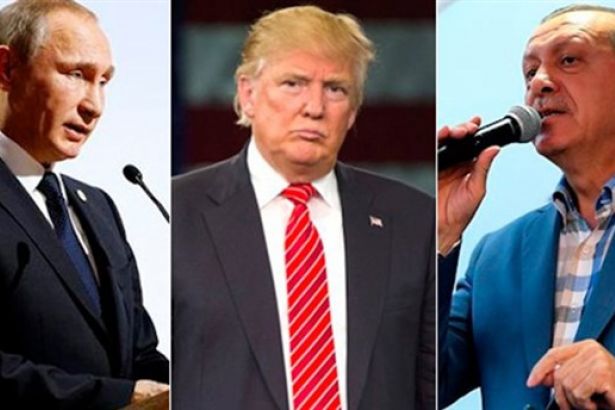 Turkey's AKP government announced they would launch a new military operation in northern Syria within days on December, 12. The target would be the US-backed Kurdish YPG militant group, President Recep Tayyip Erdoğan said. He also stated that his US counterpart Donald Trump had approved of the prospective military operation that Ankara was planning. Within the same week, after the announcement of Erdoğan, The Trump administration has announced that they began to withdraw all of the approximately 2,000 American troops from Syria, as the US President Donald Trump declared non-existing "American victory in the mission to defeat Islamic State (IS, ISIS)" terrorist there. Turkish Foreign Minister Mevlüt Çavuşoğlu said at the end of the week that a military advance against Kurdish YPG militants in northeastern Syria would be delayed until the US pullout is over.

SoL columnist Aydemir Güler evaluates the recent moves of Erdoğan in Syria and the fragile balance in international relations dominated by the imperialist centers.

Turkey’s president Erdoğan’s statements on the East of Euphrates have become frequent. Deciding which announcement to believe and which one to disregard is always disputable when the whole of AKP politics are taken into consideration. Is warmongering a real warning or is it just a bluff on the way to elections?

A part of the answer to this question is not based on the principles but the circumstances. It is related to the equilibrium of power, which may change on an hourly basis. It is understood that the possibility of the US to draw Turkey away further in Syria have diminished as the initiative has passed to Moscow-Damascus line as the Constitution process is near. On the other hand, Trump’s actions were not based on his love to Kurdish people, and he will not choose to push Erdoğan- who has proved his loyalty during the Ukraine crisis- to the opposite side.

Putin already has the ability to keep the door slightly open to the Syrian Kurds. If we read between the lines, Moscow’s message stating that the US-PYD alliance is not serving the resolution of conflicts in Syria may be interpreted as an invitation. We may witness the US permitting the Turkish army into Syria while Putin invites Kurdish representative to the Syrian constitution. We shall not be surprised if this happens.

On one side the globe is turning without any principles. However, Erdoğan's threats have a history even though his relationship with principles do not. This started when the “solution process [with the Kurdish politicians in Turkey]” ended. Worshipping in Syrian Emevi Mosque (a statement Erdoğan made meaning Assad would fall from power in Syria and Erdoğan would be worshipping in Syria as a conqueror) is now completely a dream, and this process left a stronger Kurdish movement.

Firstly, partner of the government in Turkey, then owner of an autonomous region in Syria, then freedom fighter in the world’s public opinion first against “tyrant Assad” then against IS. Under these circumstances, we have once again fallen to threats and assaults level from the peak of the whole process (Eshme spirit).

Under these circumstances, operation on the East of Euphrates cannot only be interpreted as nationalism shows before the elections.

On the other hand, the world is going through one of the worst eras in terms of principles. The useful life of strategies gets shorter, but none of the strategies is eliminated completely! When the US chose the Kurdish element as its main actor in the Middle East, it focused on Barzani-Talabani tribes. You would think that Washington was uncomfortable with the uncontrollable Öcalan element. However, the same element would provide greater contribution than the discomfort caused as long as its role does not exceed balancing the Kurdish tribes from a leftist perspective. Öcalan’s capture and delivery to Turkey was a move by the US to show the Kurdish movement its limits.

After this move, the movement continued within the shown boundaries, and served in critical occasions by facilitating the convergence of Turkey and EU, legitimizing Islamism, treating neoliberal aggression as democratic approach and acquaintance of the counterrevolution of the AKP with the hope of peace.

Why cannot the US give permission to the operation of Turkish Armed forces and force the PYD to be more dependent on the US?

Moscow will be waiting in line to utilize the imbalances in this equilibrium and will be glad by Turkey creating weight against the US and will try to gain the Kurds, which the US betrayed, under its own influence.

Do not think for a moment that cracking the mysteries of this struggle is a talent or even politics.

Up until this point, it is the hustle and bustle of the main powers in our region. However, we shall not forget that the ones being hustled and bustled are ordinary people. Bombs are falling over their heads, and they are living in cities under siege. They cannot find school or bread for their children. They consider each other as the enemy, and once they believe in this, they treat each other like the enemy, and they become a pawn in this game.

People divided by chauvinism and nationalism create the basis for the equilibrium games mentioned above. They hang on to foreign or local hegemons, and they grow the hatred they have inside against other people, working people just as themselves from different nations.

On the other hand, the hunger for peace resists inside the same people. That is why they are called “the great humanity”…

Ordinary people of Turkey, workers, the poor, intellectuals, unemployed people, students… Our opportunities to affect the “large-scale politics” among the hegemons is very low. No need to dream about it, it is low. However dirty and dark “large-scale politics” cannot be sustained without the inaction of the great humanity.

Left-wing politics is not cracking the codes of politics dominated by the hegemons and explaining the current situation. This talent is only the prerequisite of left-wing politics. After this point, it is time to set the great and ordinary humanity free of the shackles of these codes. Erdoğan increases his threats, and we reveal the hunger for peace within the masses. They sharpen their swords; we organize the working people to stand together in our ranks.

Our task is to set a boundary to the dirty politics of the hegemons.