After relatives of a patient attacked healthcare workers last week, the healthcare workers from the Communist Party of Turkey declared that the strongest barricade is to get organized. The Minister of Health described the attack as usual. 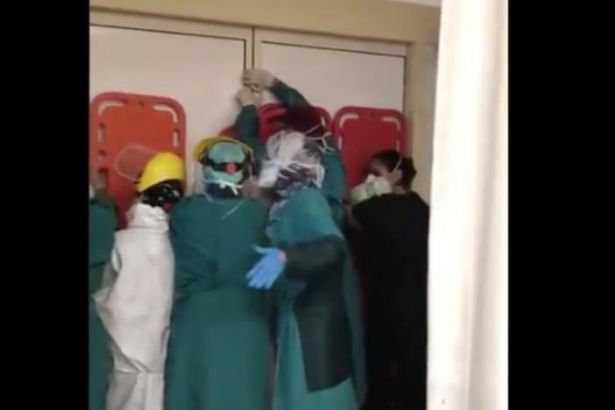 On September 21, health workers who were attacked by relatives of a patient at a hospital in Ankara’s Keçiören tried to protect themselves and their patients from violence by barricading doors.

There were very few police and gendarmes available in the hospital, and they did not intervene in the incident, said the sources.

Health workers had to protect themselves against the attack that continued for a while. Later, with the arrival of police teams to the scene, healthcare workers were able to leave the area.

The attack occurred as a result of a patient not being saved after the medical intervention.

The professional organization of doctors, the Turkish Medical Association (TTB), condemned the incident. In its statement issued on social media, the Association argued that "I swear that I will protect my patients from the environment of violence by building a barricade from my body at the Emergency Resuscitation Room door" should be added to the oath of medicine.

MINISTER OF HEALTH: VIOLENCE IS NOT UNCOMMON

The Minister of Health Fahrettin Koca also made a statement regarding the incident, saying that 'Our hospital security and security forces intervened in the incident in a short time and the judicial process was initiated. None of our healthcare workers was harmed in the incident.

Koca stated that violence against healthcare workers is unacceptable, but used expressions that normalized the violence and accepted it as a fact of life. ‘Incidents of violence are not uncommon” he said.

TKP: 'THE STRONGEST BARRICADE IS TO GET ORGANIZED'

After the attack, the healthcare workers from the Communist Party of Turkey (TKP) also released a statement. The statement said “The responsibility of this attack belongs to the government that constantly puts health workers on target in order to deceive the poor and desperate people more easily. Let's get organized together and build the most impenetrable barricade.”

“Those responsible are officials, especially the Ministry and governorships, who ignore violence, do not take the necessary measures against it, and try to pretend that a health system full of failures is operating,” the statement also noted.

The statement ends as follows:

“Obviously, this government is determined to ignore the problem of violence. We are also determined. Let's organize together, build the most impenetrable barricade, change this order that makes an attempt on our lives."