Training flights on the F-35 jets for Turkish pilots at the airbase in the United States have been stopped, the U.S. Department of State announced on Tuesday 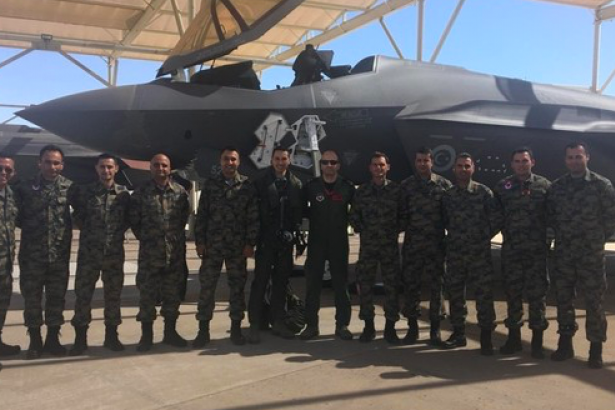 The US Department of State (Pentagon) announced that the training flights for Turkish pilots under the F-35 program have been stopped due to Turkey’s policy towards the purchase of Russian S-400 missiles.

Air Force Lieutenant Colonel Mike Andrews, a Pentagon spokesman, told that ‘‘The department is aware that the Turkish pilots at Luke Air Force Base in Arizona are not flying,’’ Reuters reported on June 11.

‘‘Without a change in Turkish policy, we will continue to work closely with our Turkish ally on winding down their participation in the F-35 program,’’ Andrews added.

According to an anonymous US official, the decision to suspend the training was given by the local commander because of ‘security concerns’, stating that Turkish maintenance crew at Eglin Air Force Base in Florida still continues to get their training.

Turkey’s policy focusing on purchasing S-400 missile defense systems from Russia and sending military personnel to be trained on using the system has caused tense relations between Ankara and Washington for a while.

On June 7, Pentagon had released a letter to the Turkish Minister of Defense, Hulusi Akara, warning that the US Department of State will stop Turkey from participating in the F-35 fighter program.

The 42 Turkish pilots have been training in the US air bases located in Arizona and Florida since 2018. The pilots are now required to leave the United States by July 31 after the Pentagon’s decision to halt the F-35 training for Turkey.

The Turkish Minister of Defense had confirmed the letter released by the Pentagon and stated that the letter expresses the expectation of finding a solution to the existing problems within the framework of strategic partnership and maintaining the comprehensive security cooperation and emphasizes the importance of continuing negotiations.

However, it seems that the response of the Turkish authorities to Shanahan’s letter is quite irrelevant to the content of the letter outlining serious (possible) military and economic sanctions on Turkey.

According to a report in Foreign Policy magazine based on the information obtained from two U.S. defense officials, Brigadier General Todd Canterbury made the decision to immediately ground the pilots and restrict their access to the ‘vault’, which holds state secrets and classified materials.

Foreign Policy’s report claims that one of the officials said that Canterbury’s main concern was that continuing to allow the Turkish pilots’ access to the F-35’s most sensitive data ─ such as instruction manuals and technical information ─ after the July 31 deadline would provide them an opportunity to take classified information out of the secure space.

The U.S. Acting Defense Secretary Patrick Shanahan and Turkish Minister of Defense Minister, Hulusi Akar, are expected to meet in Brussels as part of the NATO summit to be held on June 26-27.