Alpaslan Savaş answered the questions of US Labor Against the War on Turkey's worker solidarity and communication network PE. 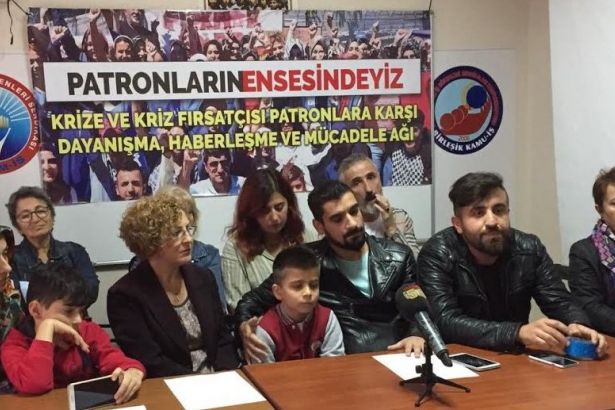 US Labor Against the War, a national organization of unions and other labor organizations founded in January 2003 to oppose the US's war on Iraq, interviewed Alpaslan Savaş about Turkey's worker solidarity network PE ('We Breathe Down the Bosses’ Neck'). Communist Party of Turkey (TKP) CC member and one of the founders of the PE network, Savaş stated that the network's aim is to prevent the loss of rights of workers, to take back their rights and to ensure that workers fight back together. The full interview is as follows.

How did Patronların Ensesindeyiz (Breathe Down the Bosses’ Neck) Solidarity and Communication network come about and what is its purpose?

PE was founded in October of 2018. Its launch coincides with the period when the already fragile structure of the economy of Turkey had started heading into a crisis culminating in the full blown economic crisis triggered by the “Priest Bronson” crisis. It was the workers who were forced to bear the burden of the turbulence in the economy as layoffs, forced unpaid time offs intensified in the 2018 fall. PE had the objective of creating a network among workers in order to not let the economic crisis turn into an opportunity for further exploitation by the bosses. Our slogan was the following: If the bosses are using the crisis as an opportunity, then let the workers use it as a potential to get organized and for solidarity

On October 13 2018, with a joint declaration of representatives of workers from various sectors fighting back, PE was announced to the public.

So how does this network function?

Our aim is to prevent the loss of rights of workers, to take back their rights and to ensure that workers fight back together. Sometimes we provide them with information they need, letting them know about what rights they have. Our website serves as a central site where the violations of workers’ rights at the hand of the bosses are exposed.

PE creates a communication network among workers. It brings together workers who are in similar situations. We have solidarity networks for different work sectors. For example, PE Construction Workers Solidarity Network was established. This network, that connects construction workers from all over Turkey, monitors construction sites and organizes the struggle at construction sites where there is a problem. In some cases, the network represents the workers against the boss.

What is the relationship of the government of Turkey with the Syrian government? Why are these two parties at war?

Turkey was directly involved in the conflict in Syria that was triggered by the intervention of imperialist centers. In fact, we can say that Turkey had a direct intervention in the civil war. Since the beginning, they gave support to ultra-reactionary armed gangs. Borders were opened to these gangs, arms and logistics were provided. And then they attempted to use to their advantage some of the vacuum created as a result of US and Russian activity in the region.

How did conflict affect workers from both sides? Who benefits from this conflict?

Currently, the Turkish Armed Forces are still in the Syrian territory. Although it seems to have a little bit of deescalation due to pandemic but there are still reports of conflict in the region.

Syria has already suffered great destruction and is trying to survive. In Turkey, the war is used in domestic politics to whip up nationalist and chauvinist hysteria in the working class. Despite the effort, it can not be said that there is much support from the people for the war the Turkish Armed Forces are waging in the territory of another country and moreover against that country’s army. The support for such an effort is inherently limited.

What is your hope for the workers of Turkey and Syria?

We of course wish for both peoples to live in countries where everyone has equal rights and freedom. We know that this won’t be possible other than under a socialist order. That is why we very much care about the solidarity between the working classes of two countries.

In Turkey, there are a lot of migrant workers from Syria. The majority of the Syrian population numbers close to 4 million today are working in Turkey, of course as undocumented workers and in the most precarious jobs. And it has been this way for years. We believe that the Syrian migrant workers are now part of the working class of Turkey. If we are being exploited together, we have no choice but to organize together.

What is the PE doing during this time under COVID19?

The outbreak is a very serious problem in Turkey as in many countries. And policies that leave the workers unprotected make the problem even bigger. For example, in the first rescue bill, 100 billion Turkish Lira’s were allocated for the bosses while it was only 2 billion for the workers, and mainly destined for the extremely poor. All pandemic measures were implemented based on the demands of the bosses. Almost all businesses continued to operate even though curfew was in effect. Workers continued to work in their workplaces. The new bill also allowed for the workers to be forced to take time off without pay. In summary, the measures against Corona pandemic did nothing to protect the workers.

Free permit arrangements were made with the new law. In short, it was the working class almost immune from Corona measures.

PE received a lot of notifications during the epidemic days and it continues to receive more. Notifications about forced unpaid time offs, pressure to keep running despite safety incidents, and layoffs are always on our agenda. We provide legal support as well as initiatives for workers to act together against these problems. We expose the bosses and we try to mobilize the workers.